Posted on December 8, 2019 by Dennis(@LyonHart_) in Reviews, Switch 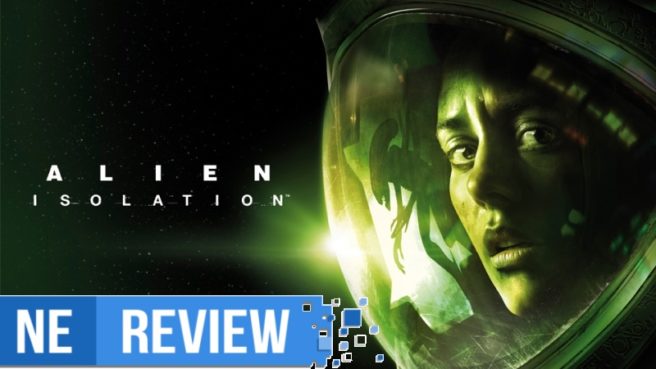 The Alien franchise has had a long history that’s inspired countless properties from a wide array of mediums since its release in 1979, and has remained a seminal work of science fiction within film, games, and books alike. This year marks its 40th anniversary, and with that sees the Switch debut of what is, to me, one of the finest horror experiences ever made. Between crafting items, defending yourself by using various components you find throughout your survival, and the deep progression with hidden areas and rewards, Alien: Isolation is without a doubt one of the most faithful adaptations of any property and is certainly a labor of love.

Ellen Ripley is the face of Alien, having survived multiple confrontations with the Xenomorphs. This has been told through multiple entries in the films and book adaptations, but Alien: Isolation gives a new perspective told fifteen years later through the eyes of Ellen Ripley’s daughter, Amanda Ripley. Having been told of possible flight recorder from the Nostromo that’s been salvaged – the original ship of her mother’s expedition – she sets out to see for herself what exactly happened as to her mother’s disappearance. Unfortunately things quickly go array as her space walk towards the Sevastopol turn life-threatening when a debris knocks out their EVA lines, propelling her to a part of the Sevastopol alone. Barley making it on board, she notices there are no communications and most power has ceased functions, leaving contact sparse and any form of rescue improbable. 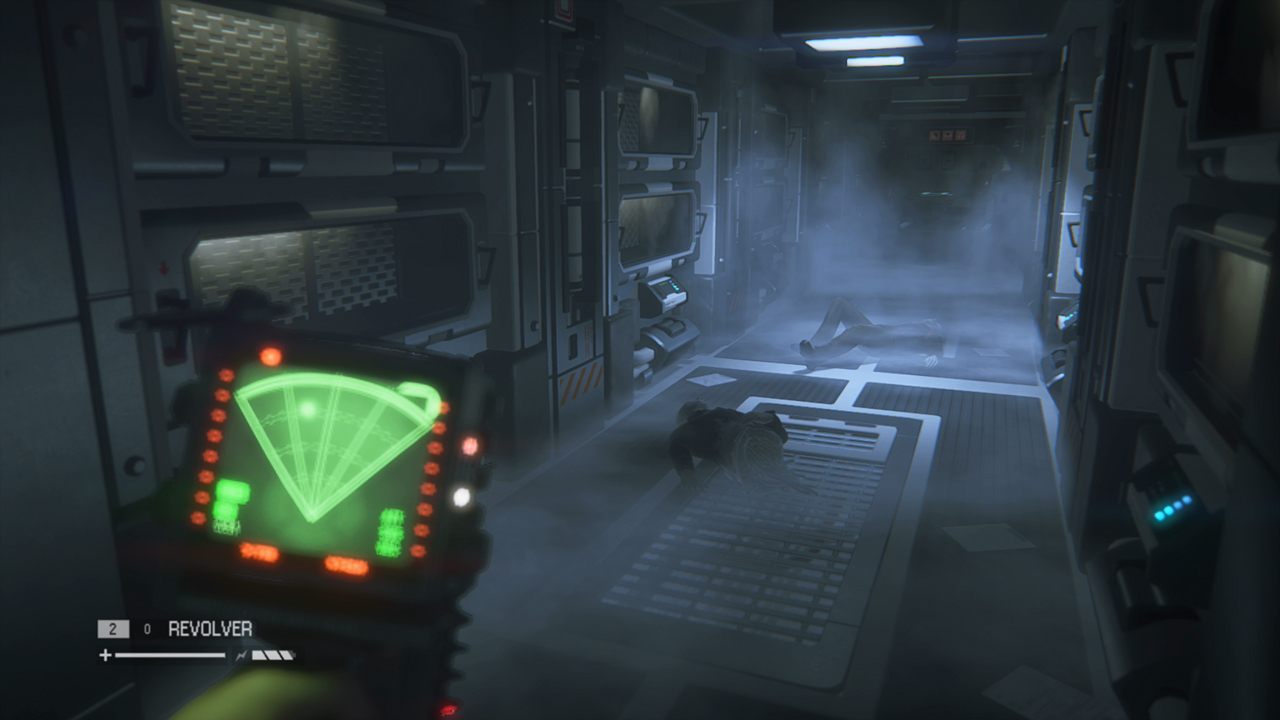 The game takes you throughout the entirety of the ship, and the sheer size of it is felt as you find yourself lost and scared trying to hide in locations you’re seeing for the first time as you’re being hunted. There’s something clearly wrong with this ship, but there are other survivors here in addition to you that need to go back home. It’s up to you to get back online in a nightmare filled with malicious creatures and an unpredictable nature.

I play a lot of horror games, but very few actually give you that true sense of survival and claustrophobic fear as Alien: Isolation does. People are scared, people are hungry, and people are surviving with whatever they can, and yet somehow the crew count seems to become less and less. People aren’t sure why and Amanda Ripley is a new face that’s lost and confused looking for her own crew and answers to help give her closure about her mother. It’s hard to trust people and one wrong move could put your life at risk.

The game eases you in by getting you familiar with the controls and how the game works, using stealth to get across other humans, some slight defense tactics, utilizing vents, lockers, weapons, save stations, crafting, and more before actually coming face-to-face, in full, with the perfect organism 1-2 hours into it. The stealth works incredibly well, and you’ll be forced to use it as running among other actions can alert the Xenomorph, and there’s no real way to outrun it, so once you’re caught it’s over for good and you’ll be forced to restart from the last save – there are no checkpoints here. Unlike most other horror games and games in general, you can’t save freely whenever you want. While you’ll have access to a multitude of save stations sporadically placed throughout the Sevastopol, each one has a certain duration before it can be used again, so if you save and then collect some stuff and quickly come back, don’t be expected to retain your progress until quite some time later. Even while at the save stations you’ll have a brief moment before a prompt comes up asking you to save, as it’ll warn you if hostiles are nearby, and you can freely look to your left and right as the save station prepares itself to keep a record of your progress. 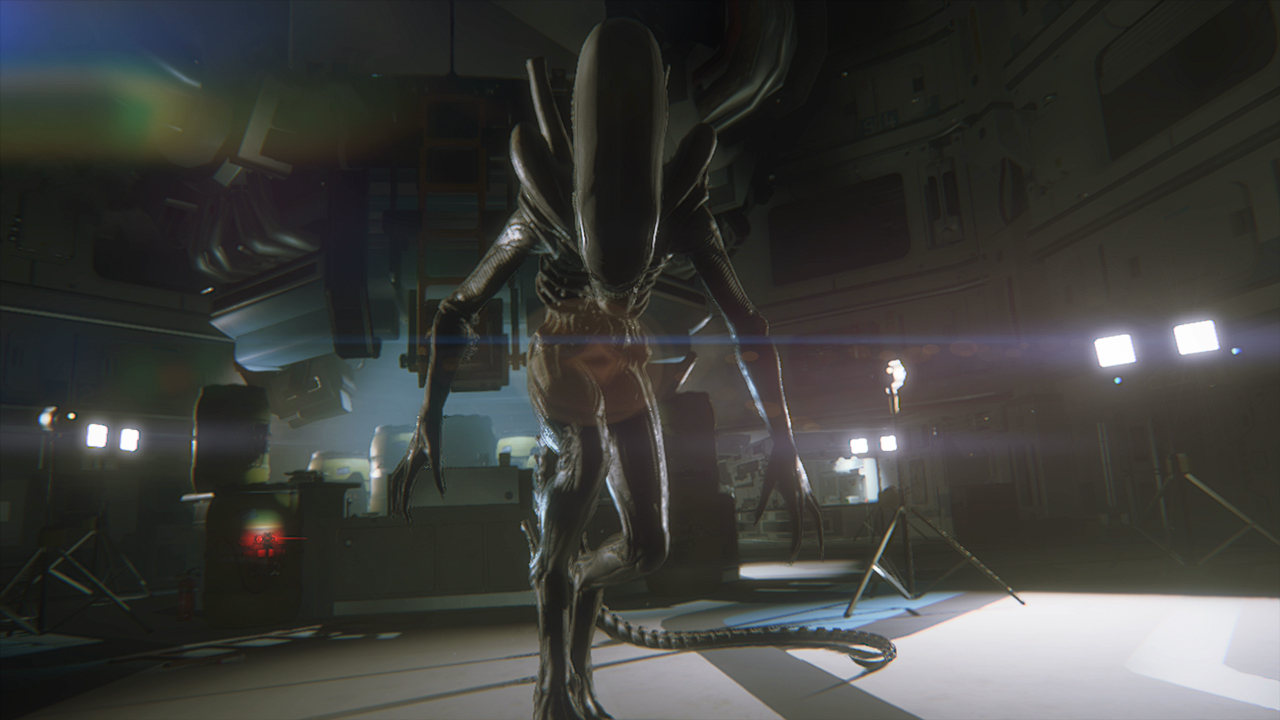 There are tons – and I mean tons – of things in Alien: Isolation that constantly make you feel like you’re being watched, even when you know full well you may have a moment to take a breather (and even then) during the more scripted segments. The stealth gameplay doesn’t just rely on your ability to crouch, but you’re given the option to slowly tilt your head to the sides and look above desks and other obstacles you may be hiding around to get a better, more discreet view of where the alien may be. Sure, you could use your sensor – and it’s highly recommended that you do so – but the sensor makes noise with each object that moves within the vicinity, and a small beep may be all that’s needed to make the alien figure out your location. The Xenomorph has heightened senses, so your only form of defense against it is to outsmart it, distracting it with smoke bombs, throwing objects in an opposite direction, or just scaring it off with fire. You’re trapped and there’s no escaping the alien, so you’ll have to make the best use of the tools at your disposal to ensure survival, even if it may cost the lives of others. The AI is so unpredictable and wonderful that no two playthroughs will ever be the same, no matter the difficulty. There’s this big adoration I’ve always had towards Alien: Isolation that makes me applaud Creative Assembly’s impeccable work here, because it’s a game I want to be stressed in, and you will undoubtedly be stressed as you’re immersed in its eerie atmosphere that can become frequently overwhelming.

Despite its 2014 release, Alien: Isolation has always held up well in most of its departments, from its detailed graphics, in-depth environmental design, immersive sound design, and overall gameplay progression. I was shocked to see the Switch version get such love and attention from Feral Interactive, the studio responsible for this masterful conversion. Alien: Isolation on Switch not only rivals its console counterparts, but remains a tech showcase in what the system is capable of when it’s not just thrown on for an extra buck or two. 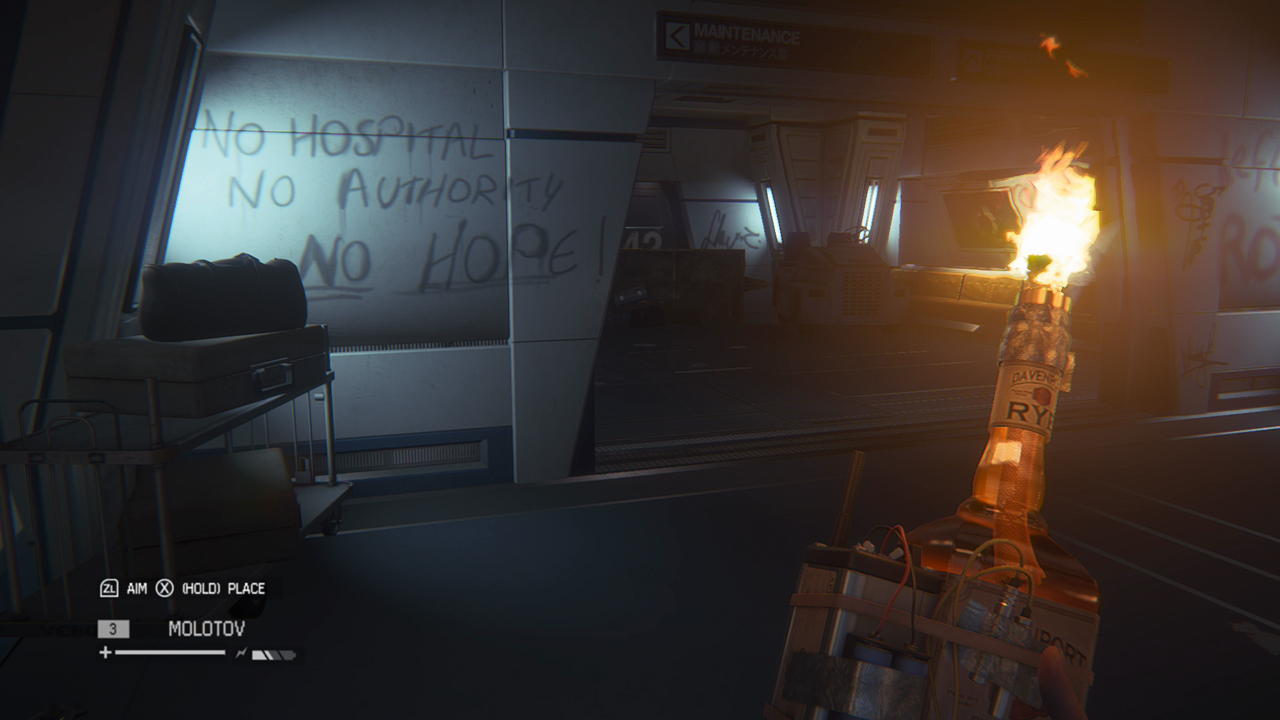 Native resolutions of 720p handheld and 1080p docked with virtually the same look it’s had since its release and how well it’s held up all these years later make it one of the Switch’s best looking games to date. Having that sort of parity – which seems to be a luxury on the Switch – is something that is undoubtedly appreciated and should be commended, alongside the fact that its runs well most of the time. The game caps out at 30 frames per second, so it can be a bit jarring if you’re coming from the PC edition which allows for higher performance, but it’s a quick adjustment and one that’s more than acceptable given the cinematic nature of the game. You never really truly need 60 FPS or higher for Alien: Isolation – it’s just really nice to look at is all. The one downside to handheld is that due to the dark nature of the game, during the day and in well-lit environments it can be somewhat hard to make sense of what’s on screen. Chances are you’ll end up seeing your face staring right back at you than what’s in front of Amanda Ripley. Thankfully, thanks to the unbelievable sound design, you can still usually pinpoint where the alien is in the vents with its thunderous and impeding stomps alongside your trusty sensor.

Alien: Isolation is far from perfect, however, as it still retains some of the bugs and hiccups it’s had years later. Usually these are sporadic and uncommon, and nothing is ever game-breaking, but they’re noticeable when things tend do go haywire. I’ve had occasions where the alien would freeze in place while going up an air shaft followed by a sudden disappearance, audio cues cutting out (this applies to music, sound effects, and dialogue), some areas that won’t load properly (when inside a vent, the hole that opens up can sometimes greet you to the backdrop of space instead of a solid floor), among a few other things on both my PC and Switch playthroughs. None of these are exclusive to the Switch version, however, and remain in place years later on all platforms Alien: Isolation finds itself on. It can get frustrating hiding in a locker completely out of sight to all of a sudden being grabbed right through it by a synthetic (known as Working Joes) that’s patrolling the area.

As a fan of the franchise, being in the shoes of Amanda Ripley and seeing the Xenomorph up close is as terrifying as it is fascinating. From the cramped spaces to the large set pieces up to its finale just before the credits roll, every piece of Alien: Isolation is amazing to both play and watch, making it not only a great game, but a fantastic Alien film in its own right – only a lot more interactive. The well-shot cinematics aren’t too long, yet still tell a lot in a short span of time to keep the pacing steady, and even in the more scripted moments players don’t really ever have much time to take a breather. Amanda Ripley’s dialogue feels authentic and smart as she traverses through Sevastopol and crawls into small spaces to escape, with strong voice acting making remarks for virtually every notable moment you find yourself in. For Alien fans and horror fans alike, Feral Interactive gives an incredible conversion for the Switch that now gives you the option to bring the experience in your hands, and with a pair of headphones and a dark environment with a screen mere inches from your face, the perfect organism has never felt so close and alive outside of virtual reality.

Alien: Isolation review copy provided by Feral Interactive for the purposes of this review.