Check out this little tidbit from a Kotaku article…

“‘We’re considering our options with maybe two screens,’ Eguchi told Kotaku, who said he considers multiple New Controller games to be ‘an interesting idea.’ That would mean games that used two new Wii U controllers. Eguchi’s five-player prototype, here at E3, has one person using a new controller and four other people using Wii Remote-Nunchuck combos.”

Okay… this kind of contradicts what the Nintendo spokesperson said about controllers not being sold separately. If games with two controllers are made available, how will we be able to purchase the second controller?

This information comes from a Nintendo spokesperson…

Well, that does kind of sound odd to me. The tech demos at this point have only featured one tablet controller, but does this mean we won’t see any multi-tablet games in the future?

Wii U discs can store 25GB of data

According to Katsuya Eguchi, Wii U discs will be able to store 25 gigabytes of data. As we reported a few weeks ago, that’s triple the size of Wii and Xbox 360 discs. The number is also comparable to the Blu-ray discs that Sony use for the PlayStation 3.

Pikmin announced for Wii U

Did you know that Pikmin is 10 years old this year? Well, it is, and Shigeru Miyamoto actually wanted to launch a new title in the franchise for Wii. However, after spending some with Nintendo’s new console and the system’s graphics, he decided to move development to the console instead. It apparently could be released sooner rather than later.

No new Wii U news at Nintendo’s roundtable

We’ll have to wait another day for new Wii U news. Tonight’s roundtable event will focus just on the Wii and 3DS. I guess that means we can look forward to third-party Wii U talk and details about the console’s online functionality tomorrow!

Assassin’s Creed Wii U news likely to be revealed tomorrow

At Nintendo’s E3 2011 media briefing earlier today, Ubisoft teased a new Assassin’s Creed for the Wii U. Unfortunately, it was just a tease – literally nothing was said about the project.

It looks like that’ll be changing tomorrow, though. On a GameTrailers TV segment, Ubisoft’s CEO hinted that news will be shared tomorrow.

Posted on 8 years ago by Brian(@NE_Brian) in 3DS, General Nintendo, News, Wii U | 1 Comment 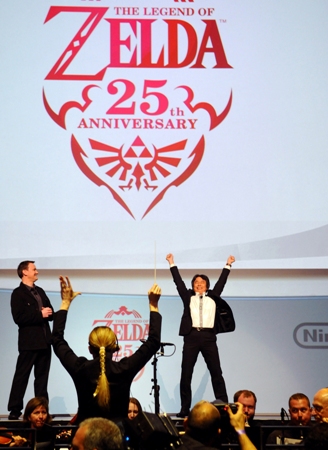 In this photo provided by Nintendo of America, Nintendo game designer Shigeru Miyamoto (R) helps conduct an orchestra performance commemorating the 25th anniversary of ‘The Legend of Zelda’ franchise, during opening day of the 2011 Electronic Entertainment Expo (E3), June 7, 2011 in Los Angeles. The E3 is the video game industry’s premier trade show.

END_OF_DOCUMENT_TOKEN_TO_BE_REPLACED

Posted on 8 years ago by Brian(@NE_Brian) in 3DS, General Nintendo, Videos, Wii U | 1 Comment