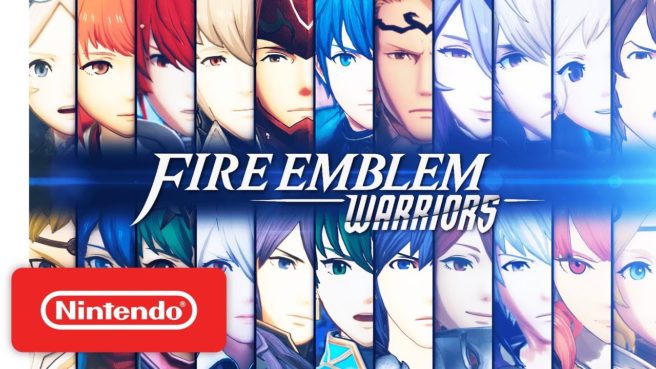 Leading up to the launch of Fire Emblem Warriors, Nintendo Dream published monthly interviews with the development team. In its most recent issue, the Japanese magazine had its biggest discussion yet. Producer Yosuke Hayashi and director Hiroya Usuda were brought back once again in addition to artist Yuta Matsunaga to talk about Fire Emblem Warriors, with the two being interviewed a few weeks before release (and just prior to the Tokyo Game Show).

Hayashi and Usuda had a ton to say about all aspects of Fire Emblem Warriors. There was more talk about certain characters in the game and the handling of their reveals (including why Azura wasn’t on the initial roster), some of the troubles encountered with designs, approach to the story (light spoilers here), gameplay systems, and different modes.

If you’re interested in Fire Emblem Warriors, you’ll likely want to read our full translation below. Just strap yourselves in, since it’s a long one.

Lyn’s addition, and her action that uses dual swords

ND: On this issue’s cover, the only Shadow Dragon character is Marth though!

Hayashi: But isn’t Lyn right there?!

ND: It’s indeed so, but even one week before release you still haven’t announced any Shadow Dragon characters, so that was unexpected (laughs).

Usuda: That’s why people had been saying ‘Awakening-Fates Warriors’ (laughs).

Hayashi: We’ve been watching those reactions from the workplace, and some even proposed, “Wouldn’t it be better if we announce more characters in bigger batches?” But I wanted [people] to enjoy the relentless information reveals. All of the trailer video announcements for this game are constructed in a way to hype up new character reveals, but it’s also because we want [people] to enjoy the announcements themselves.

ND: So you have such an intention.

Hayashi: Since we want [people] to enjoy the character announcements themselves, even on the last month before release, we decided to announce new playable characters in a wave. Ultimately we’re going to announce a number of characters at the Tokyo Game Show (TGS), so it didn’t quite match up with the timing for this issue.

ND: If we could move the publishing date by just one day!

Usuda: TGS should be ongoing right now, so I hope you’ll get to check the new information from there.

ND: And speaking of surprises, it’s about Lyn which you just mentioned now. She was announced during the Nintendo Direct, but why did you have Lyn as the character announced there?

Hayashi: Nintendo Direct being shown simultaneously worldwide is the big factor. Even so, the first Fire Emblem to be released overseas was GBA’s Blazing Blade, in which Lyn was one of the protagonists. So Lyn is to foreigners as Marth is to the Japanese (TN: In term of the most memorable Fire Emblem character).

ND: Is that why you added her in here?

Hayashi: Yes. While we were in a meeting deciding characters with Nintendo and Intelligent Systems, there were talks of “Please put in Lyn”. However, for the GBA-era characters, we wanted to create them properly including their stories, so this time we’re only adding Lyn, and if this [title] has a future, we hope we can feature them with including stories.

ND: So how did you make Lyn?

Matsunaga: Lyn has had illustrations drawn by a lot of people until now, so it was hectic for us on which [illustration] to use as a basis, and to balance that with [other] designs for this game. However, Nintendo and Intelligent Systems showed us not only the planning pictures of the original work, but also 3D data from Super Smash Bros.

Matsunaga: Yes. Of course this game doesn’t use physicques from Super Smash Bros., but we felt like we were shown one of the correct [portrayals], so it was a big factor.

ND: And this time, Lyn is using a dual-wielding style. Is this because you want to emphasize the action more than [her portrayal in] the original work?

Usuda: That’s right. Even so, there are already a lot of sword characters, so we thought to add some variations with a dual-wielding style. Lyn just happened to fit the bill since she has two swords: Sol Katti and Mani Katti, so we proposed that to Intelligent Systems.

ND: But the Outrealm Lyn that appeared in Awakening also did use a dual-wielding style.

Usuda: Because there’s that illustration from Awakening, it might be very possible to give her the dual-wield setup. Even so, if she dual-wields all the time it would feel rather off, so she mainly uses a single sword with only using the second sword occasionally. By doing that, we distinguished her from the other characters.

Fates’ siblings have been decided to be added from the beginning

ND: We’d like to look back to the prior character announcements. You announced four characters from Fates at Gamescom 2017 in Germany.

Usuda: At the time of that announcement we understand that the four characters Hinoka, Takumi, Camilla, and Leo have high popularity, but the reverberations at that time were great since finally the Fates team was being shown.

ND: Is there a reason on why you announced Sakura and Elise at a later date?

Hayashi: We wanted to make character reveals to be entertaining, so we intentionally did it [that way].

ND: You’d make the fans impatient with such a way to omit just the younger sisters.

Usuda: At first there were talks to make separate announcements for Hoshido and Nohr, but I personally put a stop to that approach.

ND: Why did you do that?

Usuda: Because if we revealed everyone from Hoshido first, nobody would think “Nohr isn’t coming as well”! (laughs)

Hayashi: Although we wanted [people] to enjoy the character reveals, it wouldn’t feel right if they already know what the next revealed characters would be.

Usuda: In that case, we had a set of the two elder sisters and two younger brothers, and Sakura and Elise would move behind them.

Hayashi: When the younger sisters weren’t revealed yet, we heard voices from anguished people like “why didn’t you include those two people!?”, but we rather enjoyed those kinds of comments.

ND: So please tell us the details on how these siblings, together with Ryoma and Marks/Xander, became playable… though we didn’t really need to hear about that.

Usuda: No matter what you think, they’re essential. I want you to imagine, for example if Ryoma, Hinoka, and Takumi were to appear, but Sakura did not. The story in Fire Emblem Warriors here is about them getting lost in a different world. If only Sakura didn’t appear here, the rest of the siblings would definitely worry about her. Even if [the protagonist] were to ask them “Our world is in danger, so please help us”, the siblings didn’t know that Sakura didn’t come to this world, so they would first think to find her. In that case… the story wouldn’t progress at all (laughs)

Usuda: It’s impossible to not complete all the siblings. That’s why from the start of development, eight character slots were already fixed.

Hayashi: There were times when we contemplated to remove someone, but all the staff just happened to be playing Fates at that time, so the opinions clashed greatly which made it just impossible (laughs). I married Hinoka so there’s no way she would be removed! And when I tried saying “Maybe remove Takumi?” someone would rebut with “Why would you remove a highly popular character!?” Such talks came about with pretty much every character.

Hayashi: And you made a book about Takumi to commemorate that, right? We have a lot of copies of that book at our workplace. Well, I’m glad we didn’t remove him (laughs).

Hayashi: Everyone has their own fond memories, so soon nobody would talk about removing someone anymore.

ND: By the way, why did you set Elise and Sakura’s weapons to magic book and bow respectively?

Usuda: These two are the same as Lissa; they’re originally staff characters, but staff is only for healing so they can’t be used [as weapons]. In that case, we had them use the weapons on their promoted classes.

ND: So it’s the same way of thinking as Lissa using an axe with her War Cleric class.

Usuda: That’s right. There were also talks to have them appear with their promoted classes from the beginning, but we prioritized character looks first. If the protagonist were to meet Lissa the first time [with that famous cutscene], when they open their eyes to see a War Cleric Lissa, it would feel off.

Hayashi: And [people] would also wonder why only Lissa has a promoted class (laughs).

ND: How were the details on you getting to decide on Kamui/Corrin?

Usuda: On treating Fates as a title, if Kamui/Corrin weren’t added then the titles would get split to Birthright and Conquest. So Corrin is essential to group them all into the Fates title.

ND: Was there no choice for Aqua/Azura?

Hayashi: We first wanted to put her in, but during the character decision we had too many slots for Fates. At this rate it would really end up becoming an Awakening-Fates Warriors, so although it was a hard decision, when we lined up the eight siblings with Kamui/Corrin and Aqua/Azura, we decided to omit Azura. It can’t be helped for this time.

Usuda: We keep saying “It can’t be helped for this time” so that we can persuade even ourselves (laughs).

ND: I see, but we can fathom that. If you count male and female Kamui/Corrin separately, you already have ten characters coming from Fates.

Usuda: Since we think Avatars must be able to change genders, Male Corrin is also essential.

ND: Matsunaga-san, did you have any occasions on sharing your character wishlists [in the team]?

Matsunaga: I occasionally whispered to Usuda “I do want Aqua/Azura to be in.”

Usuda: Yeah, and I answered with “I also want her to be in too.” (laughs)