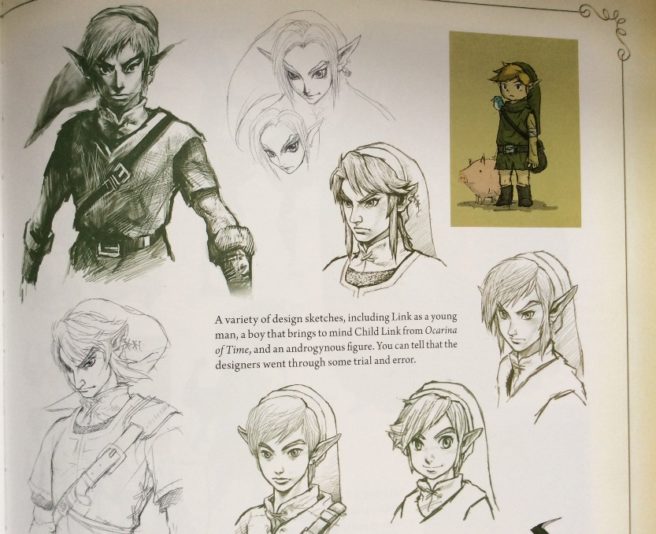 So at that point, the story hadn’t been set yet, but you needed to design the face for the new Link. What things did you keep in mind as you worked?

Nakano: For the face, I talked at length with Takizawa-san as I started to sketch. I wanted him to be a little bit older. The Link up till now had been in his teens, but for this one we were talking about making him around twenty-five… maybe even thirty.

Takizawa: Meaning it was an adventure that an adult Link was taking on.

Nakano: He would be well built… A skinny man with a pretty face wouldn’t stand a chance against a large enemy, so we thought about making him quite sturdy. So the first illustrations were, in a way, pretty amazing.

Takizawa: They certainly were. There was even a square-jawed, burly-looking Link too. [laughs]

Nakano: When I showed the sketches to the overseas staff, the response I got back was, “What the fans want is the Link they saw in Ocarina of Time.” So in the end, his face and body type were made similar to that of the adult Link from that game.

One of the most notable aspects of Twilight Princess is that Link can transform into a wolf.

Nakano: Yeah, so I made sure that the look of his eyes matched the eyes of Link as a wolf.

Takizawa: But the detail about him changing into a wolf came after the initial designs. So the sketches of Link later on had him looking much more wolf-like and wilder. At one point, there was talking about giving him a Japanese haircut style called a wolf cut, which would have given him a more wolfish look.

Nakano: I remember that. But the sketches I made for the front, back, and side views didn’t make him look very wild…