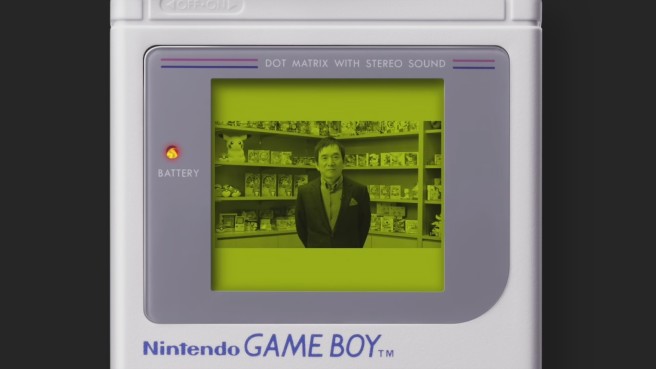 Pokemon has been eager to progress forward

Inside: Pokemon doesn’t consist of only the [mainline] Pokemon series, but there are also a lot of related works and products. Mr. Ishihara, how do you place a standard value for “things that are Pokemon, but also not Pokemon [at the same time]”?

Ishihara: I think the evaluation standard is that ultimately we do not imitate other people. What I think above that is whether “that will make Pokémon move to the next step”. We teamed up with Bandai Namco Entertainment who has developed Tekken series for a long time to make Pokken Tournament which will be also released on Wii U in March. Some people may consider it as a collaboration game though (laughs), but my way of thinking is Crossing the Mechanisms rather than the Brands. I’m thinking what kind of structures, if given to Pokemon, will give birth to a new world for Pokémon.

The high quality and good identity from the beginning of Pokemon Red and Green without a doubt became a trigger to the entirety of Pokemon. And there must be a way to live as a conservative art, always coming back to the origin roots, and never breaking the tradition. Even so for these whole 20 years, I have been able to pour my wisdom and scheming, and also somewhat able to continue receiving support from everyone. I’d like to tackle the future for expanding the world of Pokemon; if there is a need to destroy something we’ll destroy it, and if something else is needed to be protected we’ll protect it.

Inside: Is there a direction of progression for The Pokemon Company?

Ishihara: The Pokemon Company’s mission statement is as follows: “To enrich both the real and virtual world through the existence of Pokemon ”. This is very simple; for example, in Pokemon Red and Green there’s a trainer who wants to trade with Farfetch’d and you trade with her. In the real world you have schoolmates who want Meowth, and you trade with them. This means we made the trade value between in-game and real world totally equal. In-game trainers and real world trainers are getting connected. Pokémon becomes an intermediary between real and virtual worlds. If VR makes you addicted to games, and then shut away and seclude yourself from the world, I’d like Pokemon to shut the world in a totally opposite direction. We want to connect and enrich both real and virtual worlds. Pokemon GO was born from this great awareness.

Inside: Pokemon GO is a very intriguing product indeed.

Ishihara: When I started the project with Mr. Iwata three years ago, the one answer to smart devices we’ve been thinking about was actually this Pokemon GO. We are a newcomer to the world of smartphone games which now holds the majority of the game industry, so we cannot imitate anybody else. We came to an answer that this is the new way to play, so we look at it as a challenge, and we eagerly proceed with the development. Furthermore, since smartphones are spreading around the world, I’m expecting it to expand further in terms of region and language.

Inside: [The fact that you’re] collaborating with Niantic, which is a former Google in-house startup, is also very interesting indeed.

Ishihara: They are looking at a world moved by rules, and we are looking at a world moved by creativity, so this cultural difference is rather interesting. There are also some hardships, but when we think that’s the way it is, we become stimulated. Nintendo and Apple are similar in doing a platform business that unifies hardware and software. For Google, their platform is not physical but purely software instead. Searching, Maps and Gmail are their platforms, and they don’t mind whoever is making Android devices. This difference is also stimulating us.

Inside: Is there something you become able to do after 20 years have passed?

Ishihara: Recently there’s a symbolic thing. That is when we ran a commercial for the first time in this year’s Super Bowl. When YouTube later ran a poll, we earned first place out of all commercials from 52 companies. No matter how much Pokemon succeeded, up until now people just viewed this as a “sub culture”. Then when you ask them what defines a “pop culture”, they’ll answer with the likes of Michael Jackson and Beyonce. We can’t deny the recognition that peculiar people who still like games today at least used to be addicted to Pokemon in their childhood. However this time, when we aired our commercial in Super Bowl’s Halftime Show, which is the biggest moment of pop culture, and our commercial gained the highest rating, I felt a turning point.

That could be the emphasis of 20 years as a duration. It also means an era after all. From there I feel that by continuing for 20 years, we have connected generations [of people]. So it’s not like “You children may not know this, but your father used to play these kinds of games”, but instead both [parent and children] are talking with each other about Pokemon. In the future I want to create a world where grandparents can talk with their grandchildren like “Grandpa used to play with this Charizard”. I think the environment is getting readied.

Inside: Finally, could we have your message to people who love Pokemon?

Ishihara: For these 20 years, I have bet my densest periods in my lifetime, because I wanted to always continue creating new ways to play that would make Pokemon more interesting even by a little. I’m not saying everyone, but if even one of all the players is moved, I am glad as a producer. I also said this before, but I think Pokemon is a play that has a structure that connects real world with virtual world and enriches both of them. With that as the starting point, there are still many other seeds that will grow creativity. Please look forward to the next Pokemon. Because more and more interesting things will come from there.