Posted on September 25, 2018 by Brian(@NE_Brian) in News, Screenshots, Switch 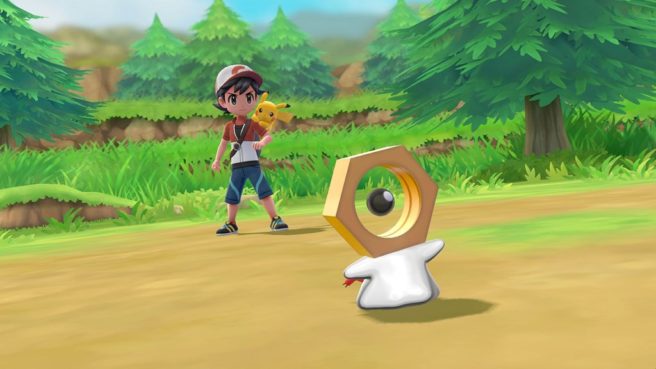 The Pokemon Company has passed along an official announcement for the new Pokemon Meltan. Find the full PR, along with a few images showing screenshots and art.

The Pokémon Company International, Niantic, Inc., and Nintendo announced today that a new Mythical Pokémon has been discovered in the world of Pokémon GO: Meltan!

Meltan is a Steel-type Pokémon with a body made mostly of liquid metal, which makes its shape very fluid. This Pokémon can use its liquid arms and legs to corrode metal and absorb it into its body. Meltan can generate electricity using the metal it absorbs from outside sources. It uses this electricity as an energy source and for an attack it fires from its eye.

In Pokémon GO, sightings of Ditto that have transformed into Meltan have been reported. Professor Oak and Professor Willow have started research on Meltan. Professor Oak, one of the leading authorities in the field of Pokémon research, is based in the Kanto region’s Pallet Town. In Pokémon: Let’s Go, Pikachu! and Pokémon: Let’s Go, Eevee!, he gives a Pokédex to both you and your rival—entrusting you with his dream of completing it. Meanwhile, with the help of Pokémon GO players around the world, Professor Willow conducts his research in the field to fully understand the habitats and distribution of Pokémon. He was once an assistant to Professor Oak, and he talks to Oak, his mentor, whenever he runs into a hitch in his research.