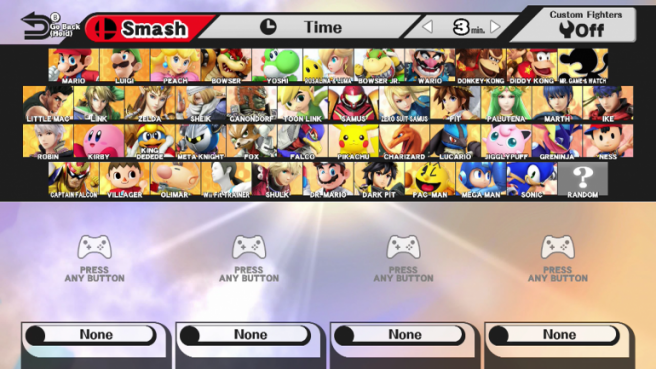 In these latest translations, Sakurai talks about patches – such as the timeframe for the latest patch, and the possibility of future updates. He also shares some thoughts regarding competitive Smash Bros. play.

Head past the break for all of Sakurai’s comments.

Q: Do you think you’ll be able to spend your next birthday (August 3rd) in peace?

Sakurai: I wonder (laughs). I don’t know, but I think so. For some reason I promised to make Mewtwo, and we might have things like patches on the way. We’re working hard on it now, which means everything we make is something we didn’t start on until now.

Question from a reader: A question about adjusting game balance. What timeframe did you have in mind when wanting to start making adjustments that led to the release of the latest patch?

Sakurai: The idea behind the most recent patch was timed to match up with the overseas release of the Wii U version, and to make the game a bit more balanced. I had a small team monitoring balance and they made small adjustments. Using data accumulated from all of the online battles worldwide, I had them do research into what kind of problems arose, and how those problems should be addressed. Then I had those changes put into practice, refined again, and then I made selections and brought up my own ideas, and that cycle repeats.

Q: What are the chances of ongoing patches?

Sakurai: In regards to the future, I’m completely undecided. Research on balance is always kept and accumulated, and if we had the manpower it could always be done, but we don’t know if those resources can be acquired. If there was an elegant way this could be done, or if there was an extremely large problem, it could happen…is the general feel, for now. However, I don’t think anything that was fixed in this patch was particularly critical. Only the most hardcore players would notice. Moreover, in a game where advantage and disadvantage because of the rules, I don’t think there’s a point in trying too hard. I’m always thinking hard to ensure that I don’t erase any unique features of a character.

Sakurai: If people want to play seriously 1v1, they should do that, and if people simply want to enjoy the game, they should do so. There might even be people who only like to play with their amiibo. I think it’s good that there are so many different ways to enjoy this game.

“Mmm. Personally, I feel that if you want to play a fighting game seriously, there are other competitive fighting games that are more suited to that, and people like that could have fun playing those. If you play Smash Brothers seriously as a competitive game, the game itself has no future. If we direct Smash only at the competitive players, it will have no future.””

If I wanted to, I’m sure I could make a more hardcore Smash Brothers game. I could make the game speed much faster, increase the number of inputs…but then, beginners would no longer be able to play the game. When the game becomes more like a sport, a tool that more strictly rewards the player with more skill, the game tapers off more, like a mountain. Just like how a mountain tapers off into its peak, that area becomes more and more narrow.

Q: So only those who desire to reach the top remain.

Sakurai: There are lots of games like that out there. If we downgraded* the game to make it more spectator friendly, that would be a bad thing. Smash needs to be a game that new players can play. Some level of technical skill may be necessary, but if just try and can move your character around a bit, that’s the important bit. We do show the results of the battle, but everyone just mashes A, right? To move on, to keep going. Making people feel this way is important.

Q: I’ll admit, regardless of whether I win or lose, I always think “just one more.”

Sakurai: I fought, I lost…these results and suffering from painful feelings is how the user base shrinks, and we want to avoid that with Smash. In that sense, Smash has many elements that are rather ambiguous and nebulous in regards to competition.