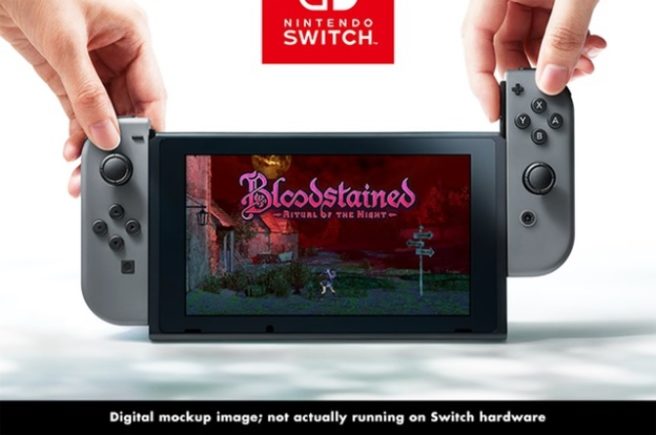 The team behind Bloodstained: Ritual of the Night has made it official: the game is heading to Switch. Additionally, plans for the Wii U version have been cancelled. News about a Switch version of Bloodstained first emerged earlier this month.

In a Kickstarter update, it’s noted that “the situation has drastically changed after the release of Nintendo Switch.” It made sense to include Wii U during the campaign as Switch wasn’t in the picture at all, but that’s no longer so. “This change made it difficult to receive the necessary support from the hardware maker, which has led us to drop the Wii U development and shift the development to Nintendo Switch,” the Kickstarter update reads.

Those who supported Bloodstained on Kickstarter can change their backer survey platform from Wii U to Switch or any other version. A refund should also be possible under most circumstances.

Read the full Kickstarter notice about Bloodstained on Switch below.

Thank you for always supporting us. I would like to give a message to the backers who pledged for the Wii U version of Bloodstained.

During our Kickstarter campaign, the Wii U was at the height of its popularity, but the situation has drastically changed after the release of Nintendo Switch.

This change made it difficult to receive the necessary support from the hardware maker, which has led us to drop the Wii U development and shift the development to Nintendo Switch.

We are very sorry that it has come to this after all your support, but we hope you will understand. We would like to respond by preparing options for our backers, such as moving your pledge to another version or requesting a refund if you don’t want any other version.

We hope you will continue to support us.

How this will work for Kickstarter and slacker backers: The Switch version is now available as an option in the backer survey for anyone who has a physical or digital version of Bloodstained coming, replacing the Wii U version. (Just use the same link you were sent to fill out your survey initially; if you have any problems with your survey, or don’t have your link any more, we can help: e-mail [email protected])

If you selected the Wii U version and you want to move to a PC, PS4, Xbox One, or Vita version, you can go to your backer survey and make the change now. (Click the “Change Your Survey Answers” link.)

If you selected the Wii U version and don’t want any of the Switch, PC, PS4, Xbox One, or Vita versions, you’re eligible for a cancellation and refund if you meet all the following criteria:

You filled out your backer survey and selected the Wii U version prior to this update.
You backed at an unlimited tier ($28 to $500)
You are able to receive a refund via PayPal
You submit your refund request before the April 20, 2017 deadline.
If you’re eligible for a refund and backed at a tier that included two copies of the game, including the Wii U version, we can also help you adjust your tier to its single-copy equivalent. Refund requests will be processed via PayPal at a later date.

All requests should be e-mailed to [email protected] with the subject “Bloodstained Wii U refund.” (Please include the e-mail address associated with your PayPal account.)