It still seems amazing that Nintendo’s handheld has done so well. It exceeded everyone’s expectations and has become a household product. These sales account for the Japanese market only, though it is a respectable achievement.

Capcom WiiWare development a definite possibility for the future

“I’m going to lump WiiWare in with PSP e-distribution, in that we’re looking for the right content first — a lot of the content we have now isn’t quite right in value or approach or interface for WiiWare.I fully expect us to be doing some WiiWare titles very shortly in the west. I won’t speak for Japan on that particular issue, but there are interesting things happening at some point there, maybe.

WiiWare has some interesting challenges in terms of interface. I shouldn’t say challenges: both challenges and benefits. The controls are different and frankly we’d like to make good use of the Wii Remote. We have a couple of concepts internally that I think would be perfect for Wii, as well as other platforms.

The other part of this is we’re trying to get a better handle on the online services that are going to be available to us on WiiWare. One of our hot buttons here across PC, PS3, and 360 is that we’re trying for feature parity across all platforms. That’s not a trivial task, especially when it comes down to user-created content.

Let’s say at some time we get into clan and guild support, or other aspects of user-created content propagation, that becomes a more interesting challenge on the Wii. Does that mean we couldn’t do WiiWare stuff that doesn’t have feature parity? Yeah, we could do that, but we have a couple of things where we might not have to cut anything. Let’s talk again next year about that.” – Christian Svensson (Vice President of strategic planning & business development) 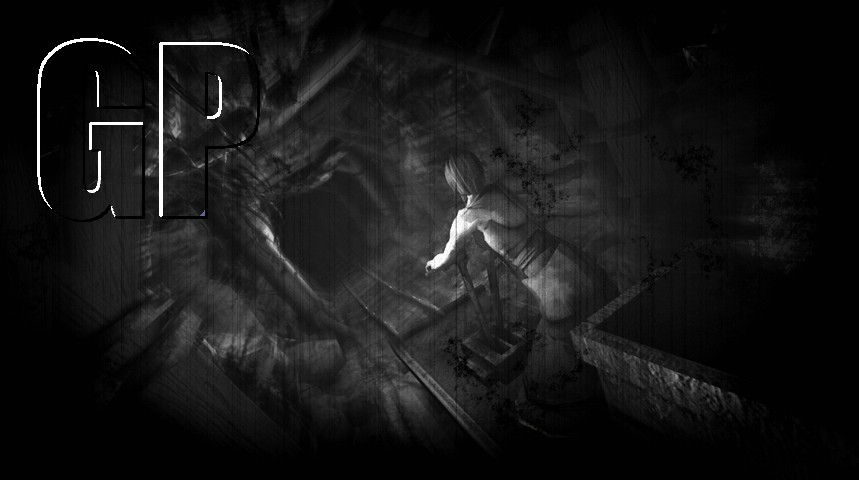 CALABASAS, Calif. (April XX, 2008) –Emergent Game Technologies announced today that the highly-anticipated psychological thriller Sadness for Wii™ is being built on the Gamebryo game development platform. The first Wii title to be presented entirely in black-and-white is in development by Poland-based game studio Nibris. Taking place prior to World War I, Sadness is a crime noir thriller with richly detailed characters and an engaging storyline.

“Without a doubt, Gamebryo is the most powerful engine available for the Wii. After getting familiar with the engine several months ago we made the decision to choose Gamebryo. Since then, our team has been working on Sadness and we are quite impressed,” said Tomasz Wisniowski, Project Manager of Nibris. “We will have quite a few graphical effects in our game, which some believe are impossible to attain on the Wii. Gamebryo helped make it possible. We are firmly convinced we made the right choice.”

“From the early stages of pre-production with Sadness, Nibris realized that they would need development technology that allowed for an extreme amount of flexibility in the creative process, which is a cornerstone of the Gamebryo framework,” said Geoffrey Selzer, CEO of Emergent. “Sadness is designed to push the bounds of Wii technically and creatively. We are thrilled to be a part of Nibris’ ground-breaking product. We’re really looking forward to playing Sadness on Wii.”

END_OF_DOCUMENT_TOKEN_TO_BE_REPLACED

Are trailers better than demos? 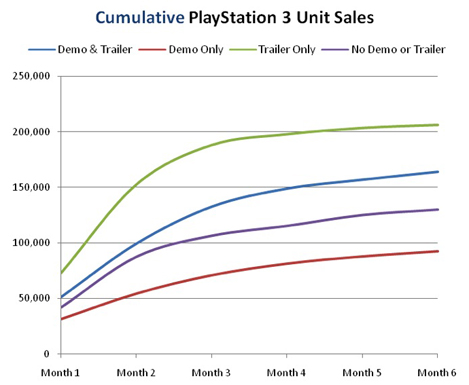 Even though the above image is specifically related to the PS3, it technically applies to all types of video game platforms. According to this graph, games with only trailers released earn the most sales, whereas games that release demos see a noticeable drop. On the other hand, providing the public with neither a trailer or demos sees a significant drop in the number of units sold. In general, gamers appear to cram for demos, which makes this data surprising. Personally, I feel that, although trailers can provide consumers with knowledge about the game in general, demos are the better choice as they can help video game buyers to determine if the demo’s gameplay suits their interests.

Danger may not be your middle name, but you’ll find plenty of it in this week’s additions to the Wii™ Shop Channel. Two classic side-scrolling action titles invite players to blast and battle their way to a thrilling climax. In a spaceship or an assault suit, it’ll take all the grit and gusto you can muster to survive these perilous, heart-pumping adventures.

END_OF_DOCUMENT_TOKEN_TO_BE_REPLACED

The coolest Brawl shoes you will ever see 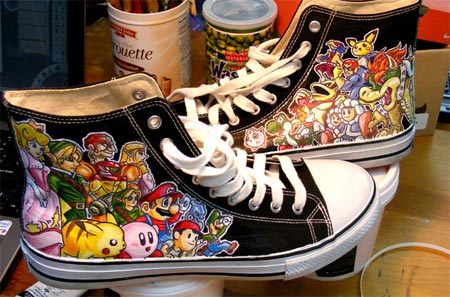 Want to celebrate the belated release of Super Smash Bros. Brawl? These shoes may set you back a few hundred dollars – as, currently, the eBay bidding price is up to $255 – but, it may be worth it. What you’ll be bidding for, is, essentially, more of a promise. The picture shown is a pair of shoes that the seller made for a friend, but a guarantee is given to the winner of the auction that he or she will be able to choose the details, size, and color, of the hand painted “Nintendo All-Stars” Converse Chuck Taylor All-Stars Hightops shoes. 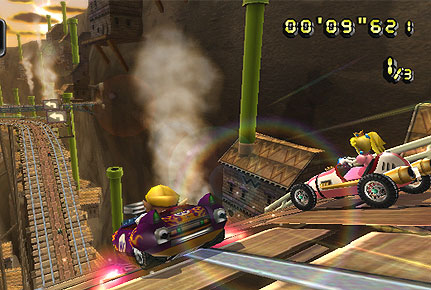 Mario Kart Wii was released just a few days ago, yet people managed to use cheating exploits to gain the upper hand in the Wi-Fi community; more specifically, the Time Trials mode. People have been earning ridiculous times that clearly cannot be achieved by racing normally. Nintendo seems to be on the case, however. Reports have began to drop in that Nintendo has rectified the issue. It’s great to see the big N taking expeditious action, but at the same time, it’s a shame people are trying to ruin the online experience.

The games of the Nintendo Media Summit

Wondering which games were available for the press to experience? The list doesn’t have many surprises, so I suppose we’ll have to wait until E3 for some goodies.

Although it’s probable that Metroid Prime 3 will not catch up to Hunters, it’s great to see the game doing somewhat well. Prime 3 was a near perfect conclusion to the trilogy, and it was worthy of the accolades it received.