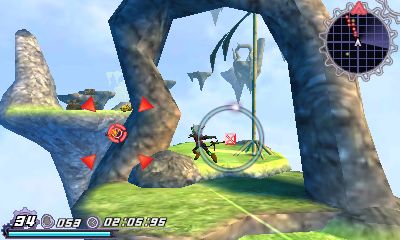 Rodea: The Sky Soldier for 3DS has roughly the same content and controls as the Wii U version, but there is no second stick for camera controls. The C-stick is not supported in any fashion. Moving the camera is done in 90 degree rotations with the “R” and “L” buttons.

You can’t look up or down with a direct button, but if you move the cursor over to an edge of the screen, the view shifts in that direction. 4Gamer notes that the movement of the cursor is quite slow, so you can’t change viewpoint quickly. It’s also possible to use the 3DS’ gyroscope for camera control when in the air. However, this doesn’t work on ground.

Unfortunately, 4Gamer says the smaller screen size compared to what you can see in the Wii U version on a television makes it a bit hard to aim at far away targets. Because the screen size also affects the thrill of flying, the site recommends playing on an XL model.

4Gamer ends its report on the 3DS game of Rodea by noting that although it pales in comparison to the Wii U version, it is still a complete game and surprisingly well done given the specs of Nintendo’s portable.

Continue on for Rodea: The Sky Soldier on Wii…