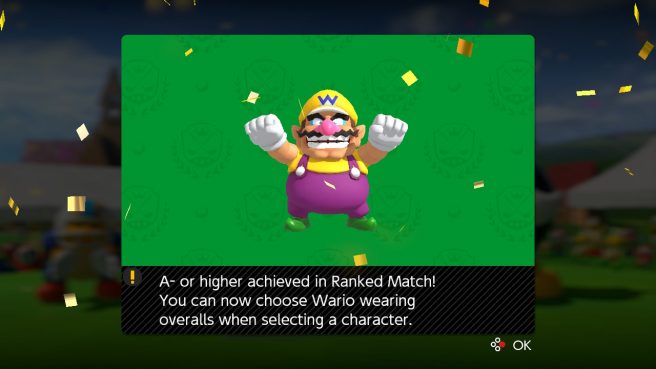 Now that we’re in June, the Ranked Match reward has been reset in Mario Golf: Super Rush, and players have a chance to earn Wario’s classic overalls. We have a look at the design above.

Similar to previous rewards, Wario’s overalls can be unlocked by attaining the rank of A- or above in the online Ranked Match. You’ll start out at the bottom, but your rank increases as you earn points, which is done by playing online matches, performing well, and taking down higher ranked opponents. To use Wario’s overalls, visit the character select screen in Mario Golf: Super Rush, hover over the character, and press the “L” button to swap.

Mario Golf: Super Rush has continued to offer cosmetic rewards for a number of months now. We’ve previously seen a Boo visor, a few new colors for Toad, new colors for Koopa Troopa, Mario’s classic overalls, a NES Open Tournament Golf outfit for Mario (as well as one for Luigi), Shy Guy colors, Yoshi colors, and Luigi’s overalls. We’ll let you know if a new reward pops up next month if there is one.

Mario Golf: Super Rush first appeared on Switch in June 2021. You can learn more about the game on the official site here.