Activision and FreeStyle Games will be updating Guitar Hero Live with plenty of new songs after launch. However, the game will feature an initial set list, which has now been shared by Rolling Stone.

On release day, the following songs will be available in Guitar Hero Live:

Guitar Hero Live will launch on Wii U this fall.

First round of songs confirmed for Guitar Hero Live

Guitar Hero Live’s first wave of songs have been confirmed through the game’s Facebook page. The soundtrack will be comprised of Top 40 songs including Ed Sheeran’s “Sing” and “Little Talks” by Of Monsters and Men, “Don’t Owe You a Thang” by Gary Clark Jr., “Cry of Achilles” by Alter Bridge, and more.

The full first ten songs are listed in the image below. Those who are interested in any of the music can have a listen by checking out the following Spotify playlist:

Activision has prepared a new behind the scenes trailer for Guitar Hero Live. Watch it below.

Posted on 5 years ago by Brian(@NE_Brian) in Images, News, Wii U | 2 Comments

Last week, Activision finally announced the next entry in the Guitar Hero franchise titled “Guitar Hero Live”. If you’re interested in learning more about the game, check out the comprehensive fact sheet below. There are plenty of details for the uninformed!

END_OF_DOCUMENT_TOKEN_TO_BE_REPLACED

Activision recently held a large-scale event at the Best Buy Theater in New York City to unveil Guitar Hero Live. Check out a half hour video of the announcement below.

Update: Pre-orders are open now on Best Buy and GameStop. And for what it’s worth, Amazon changed its release date to “December 31”.

Amazon is the first retailer to be taking pre-orders for Guitar Hero Live. You can reserve the game here.

Guitar Hero Live will cost $99.99. Activision has pinned down a Fall 2015 launch, though Amazon lists it for October 20.

Polygon was recently given an opportunity to go hands-on with Guitar Hero Live, and published an extensive report about the game. We’ve rounded up a ton of details below, though you can find the full article here.

“Guitar Hero created this pop culture phenomenon. Really, I would argue, it was one of the first titles to transcend our entire category and become this household name. But it’s been a while. It’s been five years since the last release. There’s so much emotion and passion around the Guitar Hero brand at the company. It’s something we always intended to bring back, when we had that legit innovation that would transform the way you play the game in a fundamental way. It’s taken until now to have that. FreeStyle delivered that vision. I believe this truly is the reinvention of Guitar Hero.” – Tyler Michaud, senior director of product management at Activision

“We always knew, like Tyler said, if we ever brought Guitar Hero back it had to be because we came up with some great innovation and made some big changes. The way we started it, we took it right to its core, its base. We said, what was it about Guitar Hero that was so cool in the first place? Why did it become the game it became?” – Jamie Jackson, creative director and studio head at FreeStyleGames

– The team was examining the game and plastic controller, and felt they could make mastering the game easier/deeper with a more prolonged experience
– The new guitar keeps the whammy bar and strummer of the original
– This version shifts all of the buttons to the top of the neck
– Controller has 6 buttons in 2 rows of 3

END_OF_DOCUMENT_TOKEN_TO_BE_REPLACED

Guitar Hero Live screenshots, a look at the guitar controller

Posted on 5 years ago by Brian(@NE_Brian) in Screenshots, Wii U | 0 comments

Activision released the first set of screenshots from Guitar Hero Live. You can find them below.

We also have a look at the new guitar controller: 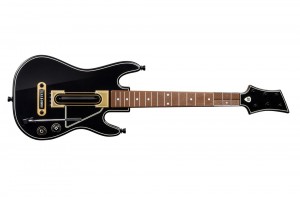 Guitar Hero Live announced, will be on Wii U

The Wii U may be missing out on Rock Band 4, but Activision is filling the music gap with Guitar Hero Live. Following plenty of speculation, the game was made official today – and we also know that it’s bound for Nintendo’s console.

Guitar Hero Live is being developed by DJ Hero creator FreeStyleGames. There are a couple of new gimmicks in this entry, including a first-person view.