Demoniaca: Everlasting Night getting a physical release on Switch 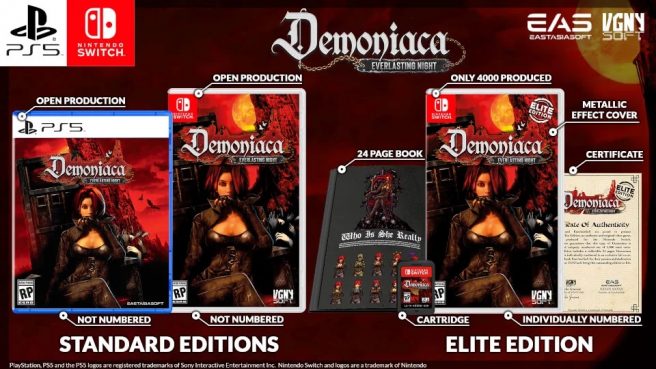 VGNYsoft has announced that it’s teaming up with Eastasiasoft on a physical release of Demoniaca: Everlasting Night for Switch.

Two versions will be available: standard and the Elite Edition. With the Elite Edition, copies include a 24-page book, metallic effect cover, and certificate. Each copy is also individually numbered. Those that pre-order this version prior to release will also receive an exclusive “box man” enamel pin.

END_OF_DOCUMENT_TOKEN_TO_BE_REPLACED

Posted on 8 months ago by Nicolas in 3DS, News, Switch | 0 comments Following its release last week, it seems Andro Dunos 2 will be receiving physical versions in North America later this year. Pixelheart is partnering with VGNYsoft in order to make boxed copies for both Switch and 3DS a reality.

The game released March 24, 2022 digitally in North America and Europe, with European physical copies available via Pixelheart. North American physical versions of the game are now available to pre-order through VGNYsoft’s site, with a planned release for Q2 2022. A free flier and sticker are included as small bonuses as well.

END_OF_DOCUMENT_TOKEN_TO_BE_REPLACED

Earth Atlantis getting a physical release on Switch 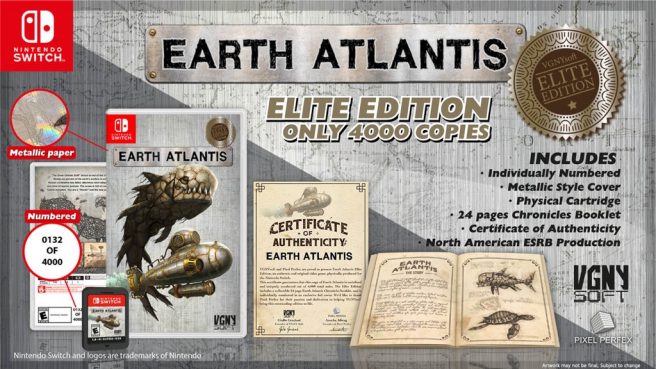 Following its debut on Switch just over four years ago, Earth Atlantis is getting a physical release. VGNYsoft has announced plans for boxed editions for the side-scrolling shooter.

Fans can choose between a standard edition ($34.99) or elite edition ($39.99). If you go standard, you’ll get a physical cartridge and certificate of authenticity. The elite edition has both of these as well as a 24-page booklet, metallic style cover, and it’s individually numbered.