A big priority Niantic has for Pokemon GO is to improve the gym system. Studio CEO John Hanke recently spoke about the need to improve the gameplay, and that’s something senior product manager Tatsuo Nomura discussed with Polygon as well.

“The gym portion [of Pokémon Go] needs a lot more work, and we are trying to improve it and make a bigger change to how the system works. Overall, I think we need a little bit more time to think through how we do it.”

“We needed to define [gyms] in a way that works in a mobile game. For example, we didn’t have … there’s no non-playable characters. That’s not how the game works. We’re an MMO, and we expect people to play with other people.”

“We expected more people to play that portion, and a lot of that is game balancing and just mechanics-wise, there’s some part of that that needs refinement.”

Niantic hasn’t shared a timetable as to when we can expect a new approach to gyms in Pokemon GO. The company does have a few updates planned for 2017 though, so it’s possible that there could be something by the end of the year.

Posted on 5 years ago by Brian(@NE_Brian) in Mobile, News | 1 Comment

A small Pokemon GO update is making its way out to users as of today. Version 1.27.4 is out now on iOS while Android owners have access to version 0.57.4.

When we said this update is small, we meant it. Niantic says that the patch only implements minor text fixes.

Posted on 5 years ago by Brian(@NE_Brian) in Mobile, News | 38 Comments

END_OF_DOCUMENT_TOKEN_TO_BE_REPLACED

Pokemon GO experienced significant issues at launch. During the game’s first few days, the game had major connection problems. We knew that the huge influx of players was putting a strain on Pokemon GO’s servers, but now we have a better idea as to how much.

Niantic director of software engineering Ed Wu said during a GDC presentation that Niantic came up with anticipated network traffic based on the player base and the growth curve for other popular mobile games. That was in addition to a “ludicrous” estimate of five times that number. It wasn’t enough though, as Niantic exceeded its network traffic estimates for the entire world just a few hours after Pokemon GO launched in Australia and New Zealand alone.

“We knew that we had something special on our hands when we nearly exceeded our peak worldwide capacity — the expected number — in a couple of hours and were trending well on the way towards that five times, ‘ludicrous’ number on what we thought would be less than five percent of our total world-wide … install base in. That was the point at which I called in the cavalry … at Google.”

According to Wu, Pokemon GO’s peak traffic was roughly 50 times more than they had initially estimated.

Posted on 5 years ago by Brian(@NE_Brian) in Mobile, News | 2 Comments

Niantic CEO John Hanke previously indicated that Pokemon GO’s lore would be expanded in the coming months. However, in an interview with Polygon, senior product manager Tatsuo Nomura mentioned that it isn’t a top priority currently. That’s simply because Niantic is “a very small team and we can only do so much at once.”

“It’s not like we’re forgetting [about the characters], but it’s just resource-wise, what we are doing next … Do we do multiplayer and gen two versus putting out more narrative?. So far, it’s not being our focus, but we are not leaving it behind. I personally still want to think a lot more stories behind them and narratives.”

Niantic is currently focusing on building new functionality of Pokemon GO. This includes trading as well as other multiplayer features.

The 2017 Game Developers Choice Awards took place earlier this evening. At the event, there was one Nintendo-related winner.

Niantic trying to determine best approach for trading in Pokemon GO, won’t be done through the internet

Posted on 5 years ago by Brian(@NE_Brian) in Mobile, News | 3 Comments

Pokemon GO is still missing a key feature from the main Pokemon games: trading. It should be added via an update in the future, but Niantic still has some work to do before it’s ready.

Speaking with Polygon at GDC, senior product manager Tatsuo Nomura confirmed that trading won’t happen through the internet. He also indicated that the team is still trying to figure out the best way to handle the functionality. Failing here could “easily kill the game.”

“[Trading] won’t be through the internet. You shouldn’t be able to exchange your Pokémon with someone who is 100 miles away from you. … The person needs to be in your proximity.”

“I wasn’t really thinking of trading as a way to solve the local area spawn issue. That was more, we have a couple Pokémon that only spawn in a couple regions, and that was the hope, that some Pokémon you have to know someone or find someone who lives in certain regions and meet and exchange. We don’t want to just have that be an online game that you can just exchange virtually.”

“We’re still trying to come up with an answer [to trading] that makes sense so it doesn’t kill the game. If we fail this, we can easily kill the game.”

Posted on 5 years ago by Brian(@NE_Brian) in Mobile, News | 2 Comments

During a session at GDC this week, Niantic’s Dennis Hwang provided a look at how Pokemon GO changed throughout development. The company messed around with different versions of the overworld map, a variety of takes on the appearance of the battle screen, and even original plans for the trainer avatar.

As for the trainer, originally Niantic had an avatar more in line with the character from Pokemon Ruby / Sapphire. However, it was scrapped during early stages of development.

Hwang said during his talk:

“[In] the original IP, the trainers have a much younger look as the target audience tends to skew younger. But for us, the avatars, we wanted to kind of elevate them to an older generation slightly.”

“We didn’t want some super stylized big-headed, small-bodied characters running on the map when you’re the real game hero. We kind of wanted to match the virtual with the physical.” 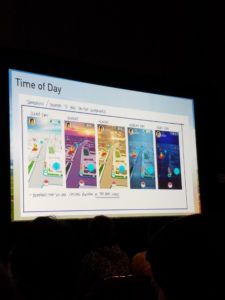 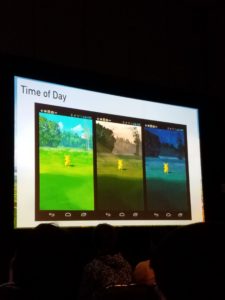 Posted on 5 years ago by Brian(@NE_Brian) in Mobile, News | 8 Comments

At a keynote in Barcelona at Mobile World Congress today, Niantic CEO John Hanke teased the future of Pokemon GO. Three major new releases are planned for the mobile game this year. Hanke didn’t clarify, but that’s likely in addition to the Generation 2 update.

Update (2/27): The update should now be live on iOS and Android.

Original (2/24): A new update is rolling out for Pokemon GO. However, it won’t be as significant as the last one that introduced a bunch of Pokemon and features.

iOS users will soon have access to version 1.27.3. On Android, the game’s update will be 0.57.3. Niantic says the patch will “implement performance improvements.”