Nintendo of Europe provides an update on Pokemon Bank as well

Now that Pokemon Bank has relaunched in Japan, fans are anticipating the app’s launch in overseas countries. Nintendo of Europe – similar to Nintendo of America – doesn’t have a specific release date to announce, but did share another update on Twitter a short while ago.

Nintendo once again apologized for Pokemon Bank’s delay as well as the time it took to provide the latest news about its availability. With Pokemon Bank and Poke Transporter’s relaunch in Asian territories, Nintendo says it will “be closely monitoring player’s experiences as we prepare for the European release.”

The tweets in full:

Hi Pokémon fans, sorry it's taken until now before we could give you an update on Pokémon Bank (1/4)

Once again we want to apologise for the delay, and thank you for your patience and your interest (4/4)

Update: Bumped to the top of the page. We have the following tweets from Nintendo of America’s Twitter account:

Please stay tuned to our social channels for updates on availability in other regions, including North America. (2/2) 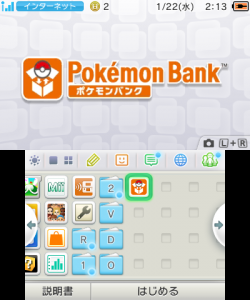 Pokemon Bank has finally returned to the Japanese 3DS eShop. Earlier this month, the app was pulled following extensive downtime affecting Nintendo’s online services. Perhaps this is a sign that we’ll be seeing Pokemon Bank in the west soon as well?

Pokemon Bank and Poke Transporter are still missing in action. There hasn’t been much news about either of the two downloads as of late, but Nintendo of America did provide a new brief update on Twitter a short while ago.

More information on the launch of @Pokemon Bank and Poké Transporter will be announced in the future. Thanks for your patience!

Pokemon Bank is still out of action in Japan (and still has yet to launch in other territories) following the unexpected downtime that plagued Nintendo’s online services last week. Today, a brief update was shared.

Nintendo says that it continues to resolve and test issues relating to Pokemon Bank. Details will be announced as soon as possible.

Nintendo also apologized to fans who are waiting for Pokemon Bank, and asks for their patience.

Pokemon Bank still unavailable in Japan, Poke Transporter back up

Pokemon Bank is still unavailable in Japan, as is the case with other territories. However, Nintendo has re-added Poke Transporter.

To access the app, users will need to visit a certain area inside Pokemon Bank, which will then load a specific page inside the eShop. Poke Transporter can’t be found on the eShop by any other means.

eShops are up for good, Pokemon Bank and Poke Transporter news coming “as soon as possible”

Following the 3DS eShop’s second round of maintenance yesterday, it has now opened for good. Furthermore, Nintendo doesn’t anticipate additional outages for either the 3DS or Wii U digital stores.

Nintendo has also said that news regarding the launches of Pokemon Bank and Poke Transporter will be shared “as soon as possible.”

The Nintendo eShop is now available on all systems. pic.twitter.com/FGWHjfSV8o

We do not anticipate any further outages, but will continue to closely monitor the situation.

We sincerely apologize for this week's inconsistencies and thank you again for your patience and support.

We will share more information about the launch of Pokémon Bank and Poké Transporter as soon as possible.

Nintendo and The Pokemon Company have officially pushed back Pokemon Bank and Poke Transporter’s launch overseas. Unsurprisingly, the delay is attributed to the issues surrounding Nintendo’s online services – particularly an influx of traffic to the Nintendo Network service.

In its announcement, Nintendo apologized to those who have been awaiting Pokemon Bank’s release. A new launch date has not been set at this time.

Nintendo and The Pokémon Company International have postponed the launch of Pokémon Bank and Poké Transporter – two software applications that were originally scheduled to launch for Nintendo 3DS on Dec. 27 – due to a large volume of traffic to the Nintendo Network service. Due to the high traffic, players are having trouble setting up Nintendo Network IDs and downloading content in the Nintendo eShop on both Wii U and Nintendo 3DS. We truly regret the inconvenience, and wish to reassure everyone that providing a solution is our top priority. We apologize for the delay and thank you for your continued patience.

Thanks to daniel for the tip.

Update: Nintendo claims that Pokemon Bank will still be out tomorrow in North America through its weekly Nintendo Download report.

Nintendo has been facing a tremendous amount of problems with its online services for well over a day now. To alleviate some of the stress placed on its network functionality, the company has removed Pokemon Bank from the Japanese eShop. Nintendo wrote on Twitter that the app was pulled due to the connection problems.

Pokemon Bank launched in Japan yesterday, which is when many of the online problems began appearing. It was scheduled for release in North America and Europe tomorrow as well, but it now seems unlikely that the overseas launch will go ahead as planned as both eShops now list a “TBA” date.