Posted on 8 years ago by Brian(@NE_Brian) in 3DS, News, Podcast Stories, Wii U | 0 comments

For more than two decades, Sonic the Hedgehog has been one of the world’s biggest gaming icons, with over 70 video game titles, four animated series, and an extensive global merchandising line to his name. This year, SEGA is excited to introduce a new branch of the Sonic universe, entitled Sonic Boom, that will debut a new look for Sonic and friends and launch their first-ever CG animated television series, new video games for Wii U and Nintendo 3DS, and a new toy line. The creative driving forces behind these projects are working together with SEGA to kick-start a global campaign for Sonic Boom that will excite and engage new and existing fans across a variety of platforms.

Sonic Boom’s visual identity includes character designs inspired by the abilities and unique personalities of each of the characters, while still maintaining the core identity and values of the Sonic brand. The rich worlds of the TV series and videogame will share a common narrative and a number of location and stylistic similarities reflecting full collaboration between videogame, TV series partners and SEGA from the outset.

END_OF_DOCUMENT_TOKEN_TO_BE_REPLACED

Posted on 8 years ago by Brian(@NE_Brian) in 3DS, Screenshots, Wii U | 4 Comments 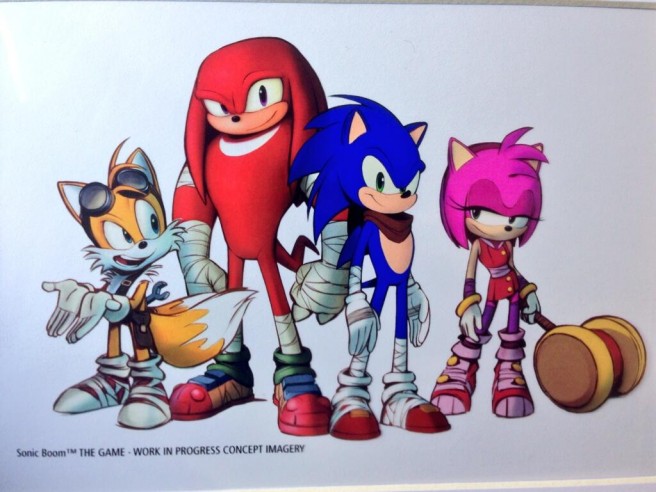 First details have come in for Sonic Boom – find them below.

– Will deliver a “fresh approach that will be at once both familiar and new”
– Sonic Boom will extend into television, gaming, merchandise and more
– Won’t replace modern Sonic
– Will take “the franchise to another level”
– Officially the third title in SEGA’s exclusive deal with Nintendo
– Game will take advantage of Wii U 3DS
– Features Sonic’s sense of speed
– New “Enerbeam” mechanic: explore the game’s world in unique ways
– Wii U version focuses on combat and exploration
– Game developed using CryEngine 3
– Wii U title will “operate in harmony with the television series and act as a prequel to the series”
– Big Red Button CEO Bob Raffei said the game will be “a very different Sonic, both in tone and art direction”
– Sanzaru Games handling 3DS version
– Will feature slightly different content on each platform
– 3DS version has different environments and enemies
– CG TV series from OuiDo! Productions
– Will air in North America on Cartoon Network during the 2014-2015 season
– 52 episodes, 11 minutes long
– Wii U version offers two-player co-op in the main campaign
– Will have modes for 4 players
– Game centers on an adnveutre in an ancient land
– Exploration, melee combat, speed
– 3DS version happens in the same world
– Focus on teamwork
– Expanded roles for Tails, Knuckles, Amy
– Each have their special abilities that link up with Sonic and possibly each other
– No online co-op

More unconfirmed Sonic Boom tidbits have appeared through a report published by TSSZ.

The site claims that the upcoming game is indeed planned as the third Nintendo-exclusive Sonic title. It’s a bit unclear whether the game will ultimately remain on Nintendo platforms though, in part due to the Jazwares sign spotted at the International Toy Fair last weekend.

At least for now, Sonic Boom is said to be a part of the main Sonic canon going forward. SEGA may change its plans depending on how fans react, which could ultimately impact Boom’s direction in the future.

Lastly, the new Sonic Boom game is apparently a 3D platformer with an emphasis on exploration. Multiplayer characters will apparently be playable.

That’s all for now. Note that SEGA has not officially confirmed this information.

Sonic Boom confirmed for Wii U and 3DS, first trailer

Sonic Boom appears to be developed by Big Red Button Entertainment on Wii U and Sanzaru Games on 3DS. The former studio is comprised of ex-Naughty Dog developers while the latter team worked on Sly Cooper: Thieves in Time.