New screenshots from The Legend of Zelda: Tri Force Heroes are now available. Take a look at today’s images below.

Nintendo’s website features an updated boxart for The Legend of Zelda: Tri Force Heroes. We’ve attached it above.

Back at E3, this is what the boxart for Tri Force Heroes looked like: 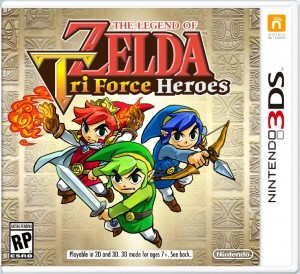 The new one looks quite a bit better I’d say!

GameSpot has posted more footage of the Snowball Ravine area in Zelda: Tri Force Heroes. Take a look at the video below.

Polygon posted a new video from The Legend of Zelda: Tri Force Heroes today. In it, we’re able to see the Snowball Ravine area for the first time.

Zelda: Tri Force Heroes will feature a number of unique outfits, including a parka that gives better traction on ice. Players can also obtain a fire power-up to light torches and melt giant snowballs.

Nintendo issued three new pieces of art from Zelda: Tri Force Heroes today. All of the images are attached to the gallery below.

Nintendo confirmed earlier today that The Legend of Zelda: Tri Force Heroes will be launching in Europe on October 23. Nintendo of America has since followed up with its own announcement, and we now know that the 3DS game will be arriving in the states on the same day. Head past the break for the full press release.

END_OF_DOCUMENT_TOKEN_TO_BE_REPLACED

5th August, 2015 – Nintendo has opened a booth full of current and coming-soon titles for its Wii U and Nintendo 3DS family systems at gamescom – the world’s largest annual trade fair for video games, held in Cologne, Germany. With several days of fun events ahead, Nintendo kicks off the show with a string of launch dates and newly revealed special editions for some key 2015 titles.

Super Mario Maker for Wii U is the star of the show at Nintendo’s booth in Hall 9.1 A10/B10 as we gear up for the 30th anniversary of Super Mario Bros. Attendees will be able to play and create unique 2D courses, or take part in daily Mario Kart 8 and Super Smash Bros. for Wii U contests throughout the show. The first 111 Mario fans can get a Mario goodie bag if they come dressed as Mario and bring a Mario amiibo on Thursday 6th August at 12:00 CEST.

END_OF_DOCUMENT_TOKEN_TO_BE_REPLACED

Game Informer has now published its full interview with The Legend of Zelda: Tri-Force Heroes director Hiromasa Shikata. Highlights include:

– On how it’s partially inspired by Four Swords in a way, but he didn’t set out to create a sequel to that title
– On why there are 3 players instead of 4
– The importance of fashion in the game
– More talk about communicating online

You can find Shikata’s comments to these various topics (and a couple more) below. The full interview is located here.

END_OF_DOCUMENT_TOKEN_TO_BE_REPLACED

Nintendo took home a couple of wins from the Game Critics Awards “Best of E3 2015”.

Super Mario Maker was also nominated as the best console game from E3. Mario & Luigi: Paper Jam received a nomination as the best RPG, but that award went to Fallout 4.

You can find the full list of winners here.

Even though E3 2015 was a couple of weeks ago, outlets have continued to post interviews that were conducted at the show. IGN has now put up its full interview with The Legend of Zelda: Tri Force Heroes director Hiromasa Shikata. Shikata talked about showing the project to Shigeru Miyamoto, the tons of different outfits in the game, and the online and Coliseum modes.

You can get a look at what Shikata shared in the interview below. Some additional comments are on IGN here.