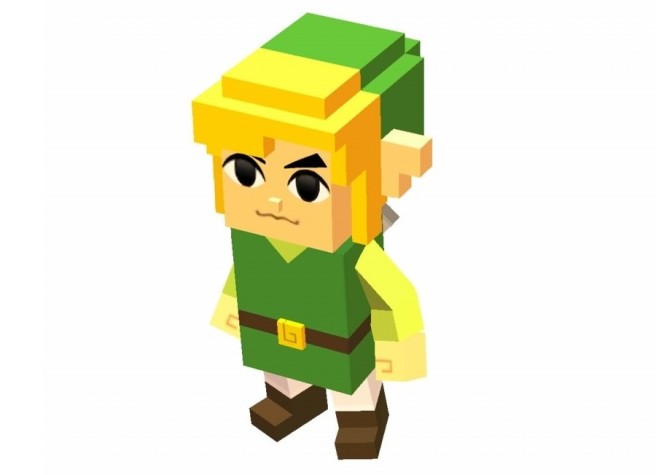 Costumes are naturally a big part of Tri Force Heroes. During the interview, Umeda talked about what elements were taken into consideration when designing these for Link:

“The first thing is to make the effect [of the costume] easy to understand. Then comes making it look interesting and easily recognizable with colors. Designs were made while keeping these three things in mind.”

One piece of concept art included in the interview is of the Cheer Outfit. Here’s a look at that:

END_OF_DOCUMENT_TOKEN_TO_BE_REPLACED 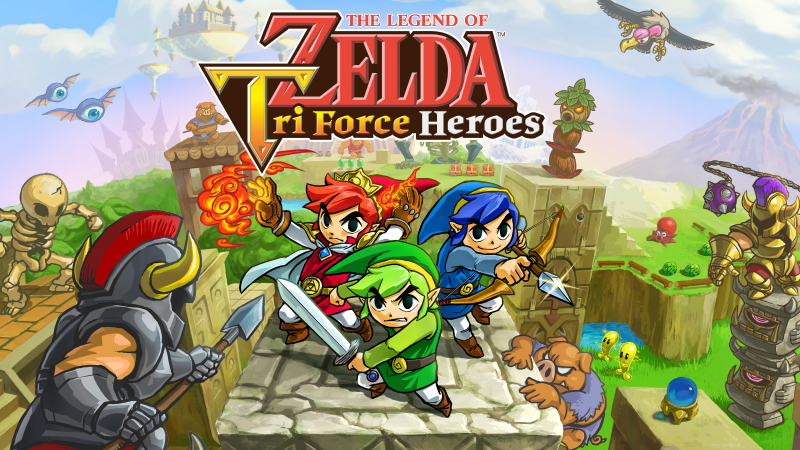 Game Informer has put up a new interview with Zelda: Tri Force Heroes director Hiromasa Shikata and Zelda series producer Eiji Aonuma. During the discussion, the two developers commented on things like using the same engine as A Link Between Worlds, the cut Emperor’s New Clothes costume, and more.

Continue on below for excerpts from the interview. You can read the full thing here.

END_OF_DOCUMENT_TOKEN_TO_BE_REPLACED 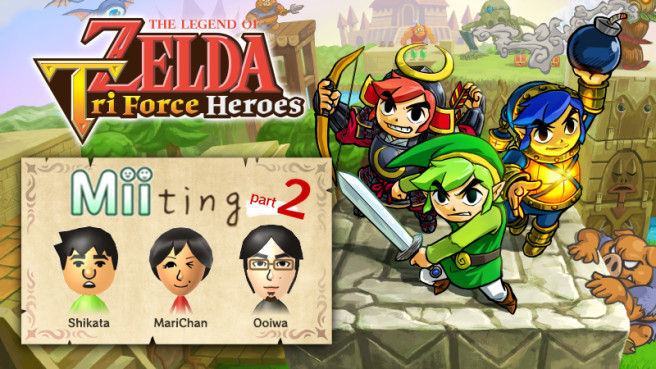 The second part of The Legend of Zelda: Tri Force Heroes’ Miiverse Miiting has gone live. Director Hiromasa Shikata once again participated in the discussion, but he was also joined by Grezzo’s Mikiharu Oiwa this time around as well.

The new Miiverse Miiting is quite a bit more interesting than the last one. There are comments about the working relationship between Nintendo and Grezzo, concept art for Princess Styla, cut outfit ideas, an abandoned idea for an icon seller that would let you buy extra icons with Rupees, and more. Head past the break for the full talk.

END_OF_DOCUMENT_TOKEN_TO_BE_REPLACED

Posted on 7 years ago by Brian(@NE_Brian) in 3DS, General Nintendo, News | 3 Comments 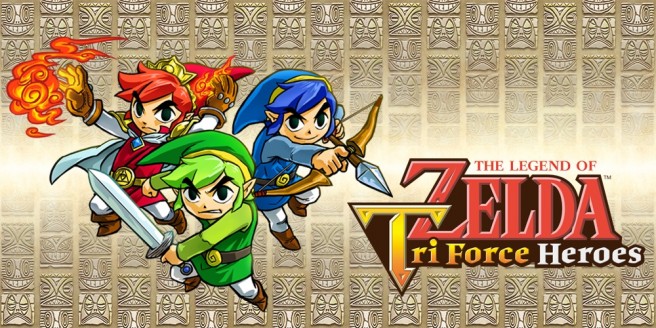 GameSpot has posted an interview with Zelda series producer Eiji Aonuma and Tri Force Heroes director Hiromasa Shikata. Between the two, they commented on the inspiration behind the game’s communication features, item ideas that were scrapped, consideration for two-player support, interest in using amiibo in future Zelda games, and more.

We’ve rounded up the various comments below. You can also read up on a few extra comments from GameSpot here.

END_OF_DOCUMENT_TOKEN_TO_BE_REPLACED 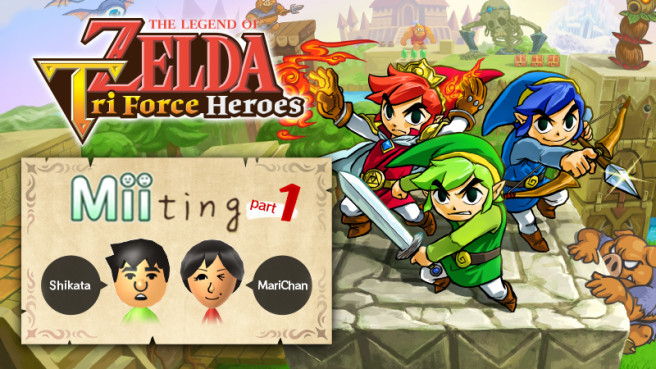 Yesterday, Zelda: Tri Force Heroes director Hiromasa Shikata stopped by Miiverse to chat a bit about the new 3DS game. While he didn’t reveal anything overly major, he did comment on the doppels, multiplayer, and more.

Head past the break to read the Miiting in full. It sounds like we’ll also be getting part 2 at some point in the future.

END_OF_DOCUMENT_TOKEN_TO_BE_REPLACED 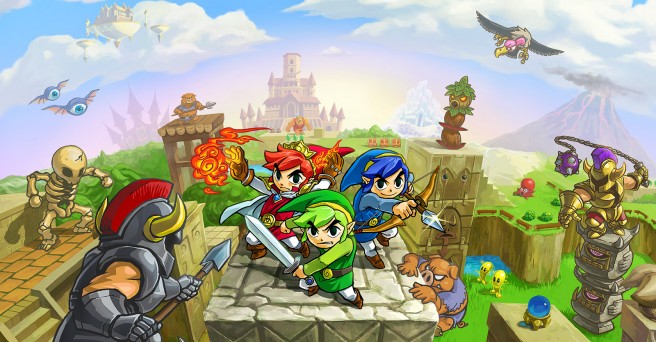 The Legend of Zelda: Tri Force Heroes offers over 30 costumes. Yet there’s one idea that was left on the cutting room floor.

Speaking with USGamer, director Hiromasa Shikata revealed one costume that didn’t make it into the final game. There was talk about adding in “The Emperorâ€™s New Clothes”, but the team couldn’t really think of a proper way to implement it.

“I can think of one right off the top of my head. That would be one that was inspired by the folktale â€œThe Emperorâ€™s New Clothes,â€ which as you know is the story of the emperor who thinks heâ€™s wearing something of the highest fashion, but heâ€™s actuallyâ€”when other people look at him, heâ€™s not wearing anything. They thought that would be a great idea for an outfit, but they werenâ€™t able to come up with an implementation that wouldâ€”they werenâ€™t sure how to wrap up that whole thing as one good feature spec, you know, â€œHow could we actually implement that neat idea as something thatâ€™s relevant to the game?â€ They unfortunately werenâ€™t able to come to a conclusion, so that never made the cut.” 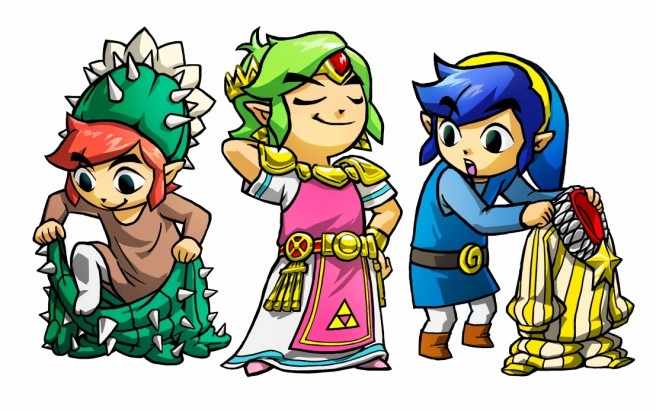 It’s no secret that The Legend of Zelda: Tri Force Heroes is heavily focused on multiplayer. Still, if players want, they can complete the entire game solo. Had it not been for Zelda series producer Eiji Aonuma though, that wouldn’t have been possible.

Zelda: Tri Force Heroes was originally imagined as a multiplayer-online game. It was only after Aonuma suggested adding in a single-player mode that this was added.

â€œWhen we started, I didnâ€™t have any thoughts of creating a single-player mode, because I was focused on a three-player mode thatâ€™s fun. So one day, Aonuma-san steps in and says â€˜Can you make a single-player for this?â€™ And I was thinking â€˜Oh no, no, thatâ€™s not . . . All of a sudden? Wow, can we?â€™ And so we went back and forth about it.â€ – Shikata

â€œWhen I created Marvelous [an action-adventure for the Super Nintendo released in Japan in 1996], it was a three-player game, and so I said â€˜How about something like that?'” – Aonuma

â€œYeah, so we thought maybe itâ€™s not possible, but then we started talking about it, and we said â€˜How about one course, can we do it on just one?â€™ And that led to â€˜Can we do it on all courses?â€™ And it turned out it was doable. So ultimately what happened was, we were able to create a new way of playing the game that was different from the multiplayer experience.â€

Zelda: Tri Force Heroes – Miiverse messages from Aonuma and Shikata, why 3 players instead of 4

END_OF_DOCUMENT_TOKEN_TO_BE_REPLACED 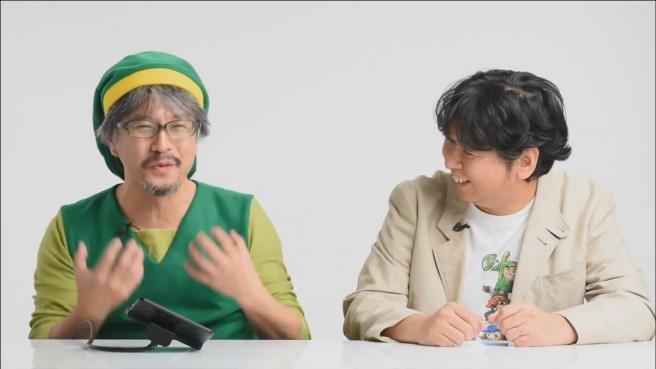 When Nintendo held the first round of Japanese Zelda: Tri Force Heroes online demo events last weekend, series producer Eiji Aonuma played for an hour during a live stream. The first of two final events just ended a short while ago, and Aonuma appeared on another broadcast with director Hiromasa Shikata. You can watch the recorded stream below.

Zelda: Tri Force Heroes has a special costume that can only be obtained through local multiplayer

The Legend of Zelda: Tri Force Heroes features over 30 costumes that can be accessed through normal play. But there’s one that is only obtained by teaming up with friends locally.

When playing local multiplayer (including Download Play), you’ll receive an item called the “proof of friendship”. You’ll get one “proof” per friend’s system. A currently unspecified amount is needed in order to obtain the special costume.

Speaking with Japanese website 4Gamer, Zelda series producer Eiji Aonuma and Tri Force Heroes director Hiromasa Shikata explained that the team thought they should make a reward for those people for play locally. Head past the break for our translation of the interview excerpt.