RISE: Race The Future no longer in the works for Wii U, but VD-Dev still hoping to make a Switch version

Posted on 3 years ago by Brian(@NE_Brian) in News, Switch eShop, Wii U eShop | 15 Comments

IronFall Invasion developer VD-Dev announced RISE: Race The Future for Switch and Wii U. Development is moving forward – despite the sad passing of the studio’s co-founder Fernando Velez.

Some platform changes have been made since the original announcement. For one thing, Wii U is now out of the picture. VD-Dev is also focusing on PC first, with other platforms to follow. VD-Dev still hopes to make a Switch version, but since the game is initially launching at the end of this year, we won’t be seeing it on a Nintendo platform until 2018.

Following some maintenance that took place last night, IronFall Invasion is back up on the eShop. The game was originally removed due to an exploit that users were taking advantage of on their 3DS systems.

Thanks 3DS fans! #ironfall is back in the eshop! Continue the Campaign & join others in the improved Multiplayer! Each mode €10/$10.

Accompanying today’s news is the release of a new update for IronFall Invasion. Head on over to the eShop to grab it.

Update: IronFall Invasion has also been removed from the North American 3DS eShop, likely for the same reason.

Announced via one of Nintendo’s Twitter accounts, IronFall Invasion has been temporarily removed from the European 3DS eShop. It will likely be re-added to the digital store at some point in the future.

Nintendo didn’t say why IronFall Invasion was removed from the eShop, but the reasoning is pretty clear. It was recently revealed that the download could be used for homebrew on 3DS.

Posted on 5 years ago by Kirara Koneko(@KiraraKoneko) in 3DS eShop, News | 15 Comments

There is now an update available that adds quite a bit of new features to the game.

New features for all players:

In the Controls menu of the game’s settings, the “Aim Sensitivity” and “Camera Sensitivity” sliders have been expanded with more increments to allow for finer tuning according to the player’s preference.

In Multiplayer: in the “free-for-all” game mode, players who leave a game before the end have their score reset.

In Multiplayer: the range of the “shock gun” item has been increased.

In Multiplayer: the damage and bullet statistics of the “grenade launcher”, “explosive rifle” and “shotgun” items have been adjusted accordingly to reflect balance issues noticed in user comments.

In Multiplayer: the respawn algorithm has been improved.

During a sprint, it is now easier to turn left and right.

The U-turn command (pressing back twice) has been improved to decrease involuntary U-turns; it is now necessary to press back twice in a faster way than before.

In Multiplayer: when joining a quick online match, it is possible for players to filter out the “Tanks (Demo)” map from their quick online match search, to allow for more variety in the automatic selection of arenas.

In Multiplayer: players will now remain invincible for 4 seconds when they respawn.

In Multiplayer: players will now also receive credits if they finish in second place.

It is now possible to take cover while sprinting.

There is now an additional lock-on on the vertical (Y) axis in aim mode.

IronFall Invasion’s new update, which came out in Europe last week, is now available in North America as well. The latest patch brings IronFall Invasion up to version 1.1. For the full patch notes, read on below.

END_OF_DOCUMENT_TOKEN_TO_BE_REPLACED 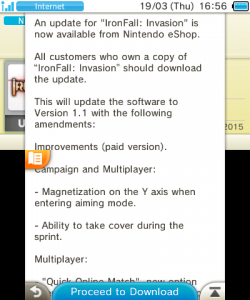 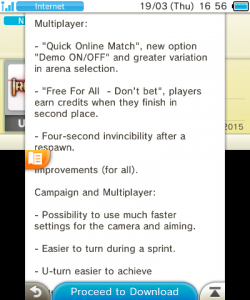 VD-Dev has prepared a new patch for IronFall Invasion that can be downloaded in Europe. Version 1.1 makes improvements to the single-player/multiplayer, and there are a few new multiplayer-specific features as well. When the update goes live in North America, we’ll be sure to let you know.

IronFall Invasion patch in the works, game could get another update this summer

VD-Dev is currently working on an IronFall Invasion patch intended to address player feedback. According to co-founder Fernando Velez, it will be possible to “expand the range of speed for movements and camera controls”, and some bugs will be addressed as well. It should be out in around March.

As for what could arrive in the somewhat distant future, Velez said VD-Dev is “hoping to create a more ambitious update.” This will largely be based upon player feedback. IronFall Invasion could potentially see an expanded campaign, or additions to multiplayer. New missions/weapons might also be possible.

This summer, if the game has found its audience, we are hoping to create a more ambitious update. But the contents of this update will depend a lot on what the players request, for instance on Miiverse. Maybe users request more contents for the campaign, or for multi-player? Maybe they want new missions or new weapons as DLC? We’ll learn more in the coming weeks. We also expect to have a better view of eventual balance issues this spring, once some players have truly mastered the multiplayer. If we rush to fix everything too quickly, we might be caught up in useless changes.