Sakaguchi would love to create a Wii game down the road

“I think the Wii is a wonderful system. It’s very unique, starting with its iconic controllers. We have no plans at the moment, but I would love to make a Wii game in the future.” – Hironobu Sakaguchi

Sakaguchi would love to make a Wii game, and I’d love to play the game that he would create! He’s done some brilliant work on the Final Fantasy series, Chrono Trigger, and even Super Mario RPG. Sakaguchi has been a bit busy with the DS and Xbox 360 the past few years, so hopefully he can concentrate his efforts on the Wii in the future.

– Mushroom Kingdom suffering from disease that causes all citizens to blow up the size of parade balloons
– Mario & Luigi (and many other citizens of Peach’s castle) swallowed up by Bowser
– All being caused by new villian which takes over Peach + Bowser’s fortresses
– Mario and Luigi are inside Bowser’s body searching for a way out for most of the game
– Bowser not aware of the people inside his body
– When you poke at a nerve on the touch screen, Bowser freaks out
– M&L’s basic attacks largely unchanged from previous games, but Bowser’s moves are flashier
– Can collect vacuum blocks, to use in battle – start sucking in air and the more you press the X button, the more it damages enemies Bowser faces
– Bowser can swallow enemies whole at times – Mario and Luigi have to take care of enemies then
– Other item allows Bowser to become huge for some battles – have to turn the DS sideways for these situations
– No North American release date yet – Summer 2009 in Europe

Man gets shot by home invaders, has Wii stolen

A man was shot during a home-invasion robbery on Tuesday night. Two armed men were able to enter at an apartment through an unlocked door. The two men forcefully requested money, jewelry, and a few other items. However, the robbers only made off with a Wii and $70 after struggling (beating him in the head and shooting him in the bicep) with the victim. The good news is that the victim is in stable condition. No arrests have been made yet.

Aksys Games has “quite a few” WiiWare games in development

Yesterday, Aksys Games announced Bit.Trip Beat for WiiWare. The company, however, has “quite a few” other games in development for the service. Aksys Games has also gone on the record about DSiWare and has relayed a message that the company loves the service.

“We absolutely love the services [WiiWare/DSiWare]. We have quite a few unannounced titles for WiiWare, and we’re looking forward to Nintendo’s new DSWare. We can’t wait to get our hands on it.” – Michael Manzanares, Aksys Games Associate Producer

MadWorld producer hopes game can jumpstart more mature content on Wii, sequel not out of the question

“More mature titles would mean that the users will have more games to choose from on the Wii and I think that is a good thing. It would be great if Madworld can really kick off that trend…We’d obviously love for there to be a sequel and will definitely consider making one depending on the feedback we receive from players of the game.” – producer Atsushi Inaba

The Wii is lacking somewhat in the area of mature content, so perhaps – like Mr. Inaba said – MadWorld could lead to more mature titles. And I know that MadWorld isn’t even out yet, but I’d love to see a sequel! 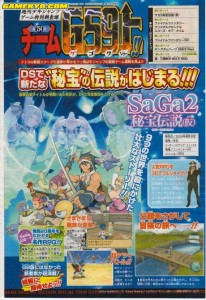 The Square Enix DS remake party keeps on rolling. This time, the company plans on bringing back Final Fantasy Legend II. Shonen Jump has a few details about the game. It will be completely redone in 3D and will feature some new gameplay. The remake is scheduled to release in Japan this year.

2K: Wii has too many crappy games

“Where people go wrong in the casual market is that, while the development costs are exploding on the casual side, they’re treating the Wii like the old PC market – making cheap, accessible games. They think if they make ten titles and two are hits, they will finance the other eight. But they forget these eight crappy titles will flood the market and will lead to problems in terms of production – and upset retailers. Also, the consumer will be pissed off because they’ll be confused.” – Christoph Hartmann, global boss of 2K

Indeed, there are too many games that simply are abysmal and are on retail shelves right now. Too many companies attempt to take advantage of the Wii’s casual market and produce titles that should not be released. The sad thing is, this process will probably continue throughout the system’s lifecycle.