This comes once again from Reggie Fils-Aime…

“Absolutely not [forgot about WiiConnect24]. What was important for us was to get today’s announcement out in terms of how you could store more content on the Wii. And essentially, with the high capacity SD card, there’s now up to 32 gigs of additional storage capacity on the Wii. With that, you can start to expect more WiiWare, more virtual content…You know, there will always be first party WiiWare content but again we see that as a key third-party, small developer opportunity.”

Posted 11 years ago by Brian in DS, Features | 1 Comment

Nintendo fans keeping vigilant eyes on Satoru Iwata’s Game Developers Conference keynote were in for a surprise. A number of gamers were predicting that a new Zelda game would make its debut. Others meanwhile, were more specific and believed gamers would see Link return to the Nintendo Wii. This was not the case, though. Iwata did indeed choose to save his last announcement for a Zelda title. However, he announced The Legend of Zelda: Spirit Tracks for the Nintendo DS rather than for the Wii.

END_OF_DOCUMENT_TOKEN_TO_BE_REPLACED

Reggie: No DLC for Punch-Out!! but there will be opportunities for Nintendo in the future

This comes from the extended interview with President and COO of Nintendo of America Reggie Fils-Aime on Gametrailers TV.

“On this particular game, we are not [doing DLC]. I’m certain that there will be opportunities for that down the road, but, really for us…Mr. Iwata has said this many times…the way we look at our first party is a way to drive the install base of the hardware. That’s what we’re trying to do. That coupled with downloadable content isn’t as great a match, but I’m certain there will be some opportunities down the road with downloadable content from a Nintendo perspective, just not on Punch-Out.”

I’m not too upset that Punch-Out!! will not support DLC. It’s pretty interesting to see what Reggie had to say regarding DLC in the future though…Could we see Nintendo take a more active role in that department with future games?

SANTA MONICA, Calif., April 13, 2009: Showing its support for Nintendo’s new handheld game system the Nintendo DSiTM, Activision Publishing, Inc. (Nasdaq: ATVI) is the first third-party publisher to have a downloadable game available via the DSiWareTM service that lets consumers populate their Nintendo DSi system with downloadable games. Created by Vicarious Visions, an award winning studio with a history of developing landmark titles for the Nintendo handheld platforms, Mixed MessagesTM is a party game designed for 2 to 21 players that delivers hours of creative and hilarious fun by allowing players to take turns either writing a phrase or drawing picture and passing it onto the next player to add their style to it.

“The Nintendo DSi should further broaden the appeal of portable gaming and we are excited to debut Mixed Messages,” said Mike Griffith, President and CEO, Activision Publishing, Inc. “The game is a fun way for consumers of all ages to explore their creativity as they evolve the message in the game.”

END_OF_DOCUMENT_TOKEN_TO_BE_REPLACED

Jonathan Caro, a world-famous high-wire artist with Ringling Bros. and Barnum & Bailey®, made a dizzying walk above the cheering crowds at Madison Square Garden in anticipation of the upcoming Ringling Bros. video games from 2K Play, a publishing label of Take-Two Interactive. He maintained his balance with only a Wii Remote™ and Nunchuk™.

New York, NY – April 13, 2009 – From a dizzying height high above thousands of cheering circus fans in New York City’s famous Madison Square Garden, 2K Play, a publishing label of Take-Two Interactive Software, Inc. (NASDAQ: TTWO) and Feld Entertainment, Inc. revealed that Ringling Bros. and Barnum & Bailey will be taking the excitement of “The Greatest Show on Earth®” to the next level by partnering to develop circus-themed video games.

END_OF_DOCUMENT_TOKEN_TO_BE_REPLACED 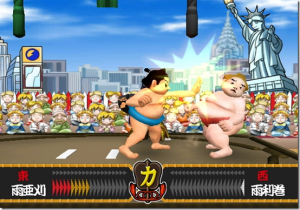 LONDON, UK – April 14, 2009 – Today Ubisoft announced that the Rabbids will receive their own standalone brand with the release for Holiday 2009 of the comedy-adventure Rabbids Go Home. Developed by Ubisoft Montpellier, the team behind Beyond Good & Evil®, Peter Jackson’s King Kong: The Official Game of the Movie and the original Rayman Raving Rabbids®, the game will benefit from a new engine designed specifically for the Wii™ home video game system from Nintendo, offering the Rabbids a hilarious adventure in a brand new universe.

The Rabbids are already beloved the world over, selling 6.5 million copies of their raving adventures and starring in their own series of videos that have kept web surfers laughing for years. Moving up to star billing in their own brand of games was a logical next step and fans will now be able to enjoy the fun in this humorous adventure game where the Rabbids unleash their insanity onto the human world as they attempt to return to their Rabbid home.

END_OF_DOCUMENT_TOKEN_TO_BE_REPLACED

Subsonic presents its range of accessories exclusive to the DSi

With the recent release of the Nintendo DSi™, Subsonic is intending to allow its users to really benefit from the new multimedia abilities offered by the new portable Nintendo console.

So, the SCREEN PROTECTION & CLEANING KIT offers 2 screen protections for the DSi™ with a microfiber wipe and applicator for simple and efficient use, a mini screen cleaner with elastic strap for attaching it to the console, and an indispensable new release for the DSi™ – a protective lens for the console’s exterior camera.