Konami has opened the teaser site for Yu-Gi-Oh! Saikyou Card Battle following its recent reveal in Jump. Access it here.

For the most part, the site doesn’t offer too much new. It mostly recaps characters we heard about before (Protagonist, Guide-san, Psychic Tendo, Strong 19), though it also looks like Yugi Muto and Seto Kaiba will be appearing.

Yugi, the original Duel King. is competing with his power to summon the Dark Magician. Kaiba is a formidable duelist who wields the ultra powerful monster card – the Blue Eyes White Dragon.

We also seem to have the first direct-feed screenshot from the game: 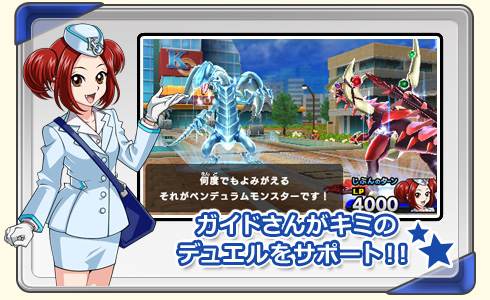 A new Yu-Gi-Oh game for 3DS, titled Yu-Gi-Oh! Saikyou Card Battle, has been revealed in this week’s Weekly Jump. The game is due for a digital release in Japan this summer. Featuring brand new characters for the game, the player will face off against numerous rivals in card battles. The scan shows the protagonist, a character named Guide-san who helps in duels, and two rivals: Psychic Tendo and Strong 19. Tendo will use Psychic types, while Strong 19 uses monsters with high attack power.

Though it is currently only announced for Japan, Konami previously announced that they were working on a 3DS Yu-Gi-Oh game for a worldwide release in the summer. Chances are high that this is that game.

During Jump Festa last month, Konami announced a few new Yu-Gi-Oh! games. One of these was revealed as a 3DS title.

Konami has now followed up with an official announcement for the west today, confirming that the latest Yu-Gi-Oh! 3DS entry will be available worldwide. A release is planned for sometime this summer.

Actual details about the project have still not been made known. Of course, that should be changing over the next few months.

Konami has announced plans to bring a new Yu-Gi-Oh! to 3DS at Jump Festa 2016. Specific details about the project are currently unknown, but the title is confirmed for launch this coming summer in Japan. Stay tuned for additional information.

Konami lends license for Momotaro Dentetsu to Nintendo, due for release next year

Nikkei recently put out a report discussing all the trials and tribulations going on internally with Konami. Lots of interesting tidbits are in there regarding drastic changes as well as a good look into why everything has shifted so much in the last couple of months, but one of the most notable points is to hear that Konami has lent the license for Momotaro Dentetsu to Nintendo to release on their platforms.

For those unfamiliar, there has been quite a bit of animosity between Konami and the series creator Akira Sakuma lately in regards to Momotaro Dentetsu – the extremely popular board-game style video game in Japan – due to creative issues, power struggles, financial disagreements and more. A couple of months ago, that all came to an end when Akira Sakuma had announced via Twitter that he was done with the Momotaro Dentetsu series due to repeated disagreements, stating in early June “Konami hasn’t gotten in touch with me at all. This is how they’ve tossed me aside for a while now. I’m announcing here that Momotaro Dentetsu is officially done. Ishikawa at Konami squelched everything.”

Fast-forward to now and it seems the series will continue even without its beloved creator with Konami lending the license to Nintendo for a planned 2016 release, only asking for the licensing fee in this partnership. Konami owns the IP as well as former developer Hudson Soft, so they have every right to continue developing and licensing Momotaro Dentetsu, even if fans and its creator say it’s done.

It’s certainly an interesting choice that Nintendo would scoop this particular title up and not some of their other well-known properties. Though this is certainly something that will only be released in Japan, what are some of Hudson Soft’s IP that you’d like to see revived and on Nintendo platforms?

Posted on 5 years ago by Brian(@NE_Brian) in News, Wii | 5 Comments

A new interview from USgamer has extensive comments from Koji Igarashi about Bloodstained and the game’s recent Kickstarter. You can find that here.

In one section of the interview, Igarashi reflected on some of his previous titles. What he said about Castlevania Judgement seemed particularly interesting. Here’s what was shared about making the nontraditional Castlevania title for Wii:

So there are games, and then there’s succeeding and/or not succeeding. Video games are a tough business, and a lot of games don’t succeed. The smart man will try to learn from his mistakes.

When it comes to Castlevania Judgment, the one thing I learned was from the production side – how to make the best game I possibly can with a variety of different limitations: budgetary, time, etc., thrown on you. Obviously, that wasn’t the best game ever, but it was the best game that I think anyone could have made within those limitations. And the game did get out the door.

Little known fact: We pitched "The Ward" to Konami in 2007 as something that could have become a Silent Hill DS game.

Our goal was always to release The Ward as an original game, but we were also open to the idea of turning it into a licensed horror game and approached Konami to see if they wanted to work together to mold it into a Silent Hill game for the Nintendo DS.
They were kind enough to meet with us, but the meeting only lasted a few minutes and ended with their [representative] saying they wouldn’t let a team like us handle the Silent Hill license.

That was Renegade Kid’s first pitch in 2007. The studio reached out to Konami again a few years later, with a new pitch based on the Dementium II engine. Sadly, Konami still wasn’t open to the idea.
“Konami’s response that time wasn’t dismissive like the first time,” Watsham mentioned to IGN. “They simply didn’t want to venture into the DS space with a horror title at that time.”
Source

Konami says production of LovePlus and Tokimeki Memorial will continue

It was recently revealed that Akari Uchida and Mino Taro have left Konami. Both staffers played a significant role in the creation of the LovePlus and Tokimeki Memorial titles.

Konami followed up with an official notice today, and said that the LovePlus series will continue despite the departure of Uchida and Taro. The full message reads:

Thank you for your continued interest in our product line.

Given the resignations of Akari Uchida and Mino Taro as staff members who were formerly in charge of production on the Love Plus and Tokimeki Memorial franchises, we are aware of everyone’s concerns about the future of both franchises.

Love Plus and Tokimeki Memorial are both series of games that are deeply important to us and have earned your love and adoration for many years and as such, production of them will continue unabated and it is our sincere hope that you will likewise maintain your enduring support moving forward.

If there are still any remaining points that you wish to see clarified, you may reach us at our customer service line.

Two primary staffers from the LovePlus series have announced their resignation from the company. Senior producer Akari Uchida as well as character designer Mino Taro have moved on.

Uchida said of his departure:

“I still don’t know yet, but I’d like to keep up the pace and continue doing what I can do. …it was when a fan told me ‘thank you!’ while clenching my hand in tears. In the end, it was the my best decision after thinking about what I can do for such fans from this point on.”

“Now that I have all the time to think about the unlimited things I can do, [the thoughts] of hopes and uncertainty has me jumping up and down like a child. I’d like to have an opportunity to be able to make something together with you all, so when that time comes, please lend me your strength. Let’s cause a commotion together, again!”

“I have nothing but the deepest feelings for the titles I’ve worked on. In the midst of working in rough conditions as a video game creator, there was a lot I thought about, but I’ve come to my decision after thinking about the last opportunity of being able to do things I wasn’t able to with Konami.”

Since “Mino Taro” was part of Konami, he intends to work under the new freelancer pen name “Minoboshi Taro” to signify the new start.