Plantera DX out on the Japanese Switch eShop next week

It won’t be much longer until Plantera DX hits the Switch eShop – at least in Japan. A listing added to the store today confirms a release date of June 8. The game will cost 500 yen.

We have these screenshots from the listing:

We reviewed Plantera when it came to Wii U and 3DS earlier in the year. The Switch version features new content including additional animals and characters, improved visuals and new music. 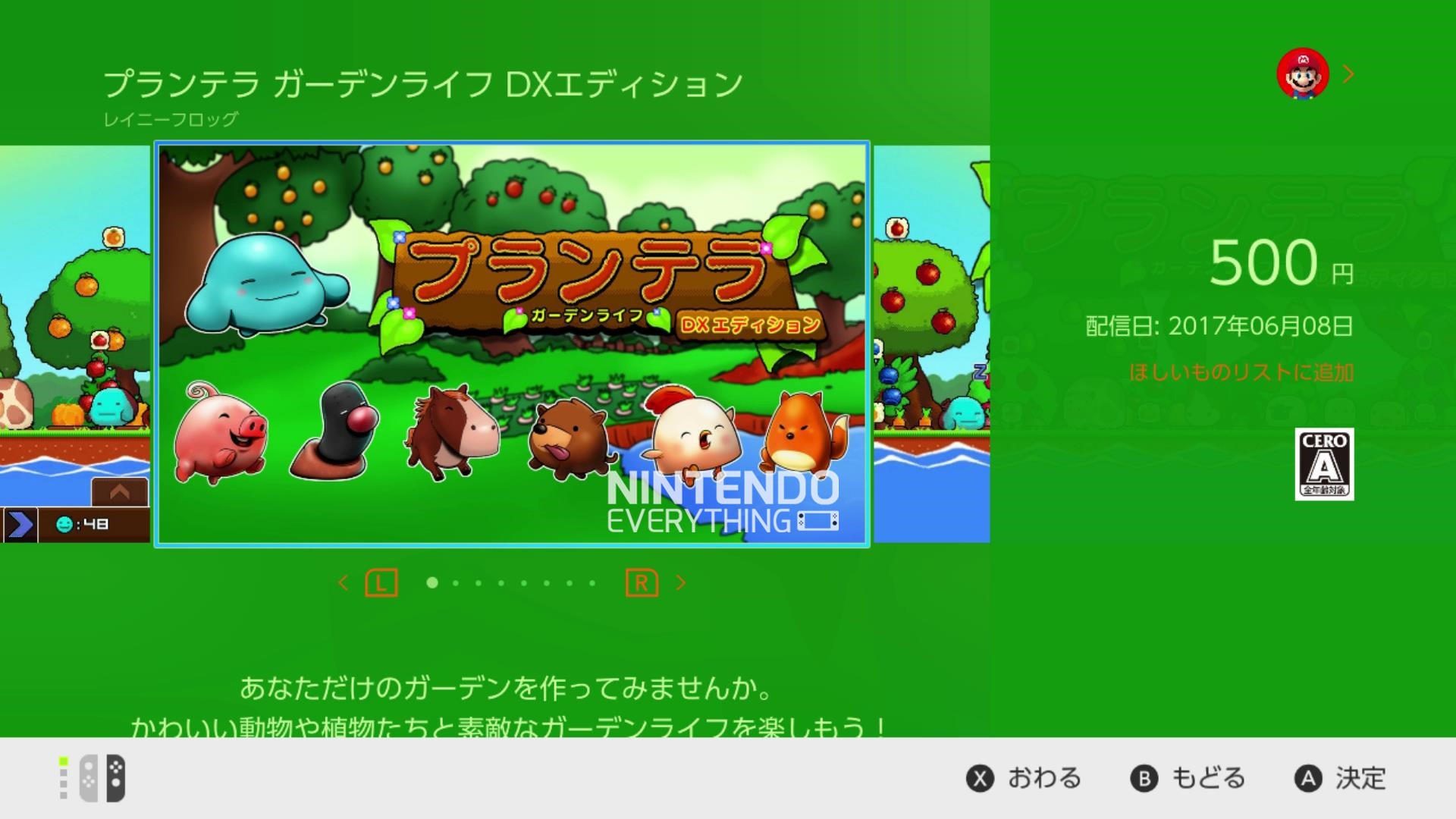 More Plantera DX details emerge, will release outside of Japan

Posted on 3 years ago by Zack in News, Switch eShop | 0 comments

More details and screenshots have emerged regarding the recently announced Plantera DX for Switch, including a confirmation of a western release. Ratalaika Games will bring Plantera DX to the west “later down the line,” possibly as late as the 2017 holiday season. This version of the game is supposedly around three times larger than the 3DS version of the title. New content is included in this version of the game as well, such as new animals and characters, improved graphics and new music.

While the original wording was a bit vague, it seems that Plantera DX will only have limited support for the Switch in TV mode, as the focus on touch screen controls is still present in this version. The content added in Plantera DX is exclusive to the Switch version of the game, and will not be added to the 3DS or Wii U versions of the game.

While Plantera DX isn’t expected to release until the “holiday season” outside of Japan, the Japanese version of the game includes an English translation. If you don’t feel like waiting, you should have little trouble picking it up from the Japanese eShop when it’s released.

You can find new screenshots of the game in the gallery below.

Ratalakia Games brought Plantera to Wii U and 3DS earlier this year. The game is now making its way to Switch as well. Rainy Frog is releasing it in Japan as “Plantera DX”, but Ratalakia may choose to handle the western release.

For those who haven’t heard about Plantera previously, we have the following overview:

“In the world of Plantera you grow your own garden and breed plants and animals to earn coins with their produce. Use the coins to buy new plants and animals, and also special items and garden expansions. Watch everything grow, help planting and harvesting, buy new things, and defend your garden from sneaky magpies, rabbits, foxes, and wolves. Raise your level and the productivity of your plants and animals! Earn more and more, and create your own dream garden!”

We reviewed Plantera when it originally hit Nintendo platforms in February. You can read it right here.

Posted on 3 years ago by Jakob Vujovic(@jakovujo) in 3DS eShop, Reviews, Wii U eShop | 0 comments

Have you ever played Cookie Clicker or one of its hundreds of clones? Planetra is one of those idle games, now on your Wii U and 3DS. You harvest fruit, berries, eggs, manure – the whole gambit of things that come out of a farm, for gold. More gold means investing more resources into the farm. More resources yields larger quantities of produce to sell for yet more gold. Watching numbers tick up at a growing pace then releases dopamine in your brain.

END_OF_DOCUMENT_TOKEN_TO_BE_REPLACED

Posted on 3 years ago by Brian(@NE_Brian) in 3DS eShop, Videos | 0 comments

We’ve seen plenty of Plantera footage on Wii U, but how’s the 3DS version shaping up? Have a look for yourself in the video below.

Posted on 3 years ago by Zack in 3DS eShop, Videos, Wii U eShop | 0 comments

About 25 minutes of footage from the Wii U version of Plantera is now available to watch on YouTube. You can check it out below.

Plantera was already confirmed for launch on the European eShop next week. Ratalaika Games has now followed up about plans for North America, and we can now say that both regions will have the title on February 9.

Posted on 3 years ago by Brian(@NE_Brian) in News, Wii U eShop | 0 comments

Two digital titles have been dated for Europe. Plantera on Wii U / 3DS as well as WordsUp! Academy for Nintendo’s console are both slated for next Thursday.

Here’s the listing for Plantera:

And the listing for WordsUp! Academy:

Posted on 3 years ago by Brian(@NE_Brian) in 3DS eShop, Videos, Wii U eShop | 0 comments

Plantera is due out soon on both Wii U and 3DS as an eShop title. Ratalaika Games published a trailer today, which we have below.