Originally released in 2013 at retail and through the eShop, the game was about cars that turned into robots and had an anime to support the story as well. Neither game nor anime did very well and the anime was cancelled shortly after the release of the game.

Posted on 7 years ago by Kirara Koneko(@KiraraKoneko) in 3DS eShop, Images, Screenshots | 0 comments

Posted on 7 years ago by Kirara Koneko(@KiraraKoneko) in 3DS eShop, News | 3 Comments 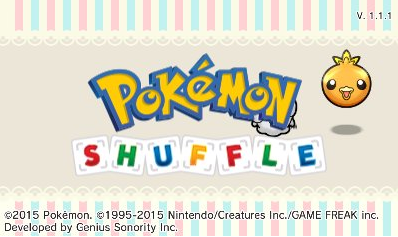 A Pokemon Shuffle patch is now live directly from the 3DS eShop.

The iconic mobile sports game heads to console for the first time!
Flick Golf, the world’s most addictive handheld golf game, is coming to Nintendo 3DS in time for the 2015 Masters Tournament, before April 9 2015.
Get ready to experience Full Fat’s award-winning touch controls, enjoyed by millions in the original #1 App Store game, for the first time on console!
Flick, spin and curve your shots to sink the perfect hole-in-one. Adjust the ball in the air using the Nintendo 3DS Touch Screen. StreetPass with other Nintendo 3DS users to collect their high scores and challenge them to become a golf master!
“What Flick Golf 3D delivers is a polished, simple and accessible experience.”

– Nintendo Life
Flick Golf 3D makes excellent use of the 3D Depth Slider*, making it easier than ever to judge the position of the ball and adjust spin to hit the shots of your dreams. It’s a perfect fit for the super-stable 3D of the New Nintendo 3DS.

Play on several challenging courses in Quickshot, compete for trophies in World Tour, or put your golf skills to the ultimate test in Quickshot Pro.
Full Fat has a long history of developing for Nintendo platforms, dating back to 1996 and the Game Boy Color. We couldn’t be more thrilled to return to our roots with Flick Golf 3D!
Coming soon:

ESRB: E for Everyone

Krakow, POLAND – The game publisher, Teyon, and the Japanese developer, Mechanic Arms, proudly announced today the release of Excave, a dungeon-crawling RPG adventure for Nintendo 3DSTM. The game will become available in the Americas in the Nintendo eShop on February 19th, 2015 for $4.99, with the European release following soon.

Imperial City is at war! The King needs you to explore the perilous and ancient Labyrinth beneath the city – find out why this mysterious magical laboratory now spews out an army of powerful monsters bent on destruction, and descend to its lowest depths to rescue the missing Magician.
Triumph in a test of your weapons & magic, or perish trapped deep within the twisting halls of the Labyrinth. Explore, fight and win fame & fortune, then return to the city above to heal, identify fabulous treasures and repair & upgrade your equipment. Are you brave enough to explore the treacherous depths?
Game Features:
• Classic dungeon exploration RPG from Japan
• Choose and fully customize your character with hundreds of treasures and equipment items to collect, modify, upgrade, repair and sell
• Test your courage & skills against hundreds of unique enemies
• 50 terrifying dungeon levels to explore, with 5 massive boss fights
• Progress through an epic storyline to develop your character’s abilities in true RPG fashion

or head to the official website for more information:
http://www.teyon.com/games/excave-3ds

About Teyon
Teyon is a developer and digital publisher of video games for major platforms. Established in 2006 in Krakow, Poland, it has since expanded creating offices in Lodz, Poland and Tokyo, Japan, employing over 70 gaming enthusiasts. Using proprietary cross-platform technology, Teyon has been able to successfully release over 100 self-developed titles as well localize many more. For more information, visit www.teyon.com.

Posted on 7 years ago by Kirara Koneko(@KiraraKoneko) in 3DS eShop, News | 2 Comments

Vd Dev Games has announced that now that IronFall Invasion will be releasing this week in Europe they can focus on a North American release.

They confirmed via twitter earlier today that they will are working on it now, and hope that it will not take long and are estimating a possible end of February release.

Posted on 7 years ago by Kirara Koneko(@KiraraKoneko) in 3DS eShop, Videos | 3 Comments

10th February 2015 – On 13th February, a three-year project by three talented indie developers is set to be unveiled exclusively on Nintendo eShop* for Nintendo 3DS, with IRONFALL Invasion bringing an energy-fuelled, 60 frames per second**, third-person action experience to handheld console owners. Best of all, some free content will be available from launch for players to try out the game.

At a time when Earth has been invaded by an alien horde, IRONFALL Invasion pits you in the military boots of a courageous resistance movement fighting to reclaim the planet from the clutches of the Dyxides. The action will take players across the globe, with intense battles raging across urban landscapes, underground laboratories, vast canyons, and even inside a volcano, with the constant need to find cover in the environments and keep an eye on your heart rate – if the latter exceeds 200, your fight is over.

For Nintendo 3DS system owners***, the touch screen is your key battle instrument, with the ability to aim at enemies using the stylus, while also enabling you to perform other actions like reloading weapons or dropping into cover. Meanwhile, for players with New Nintendo 3DS or New Nintendo 3DS XL hardware, the system’s C Stick allows for quick and precise aiming when targeting enemies in the heat of a stand-off.

– IRONFALL Invasion: Campaign features 11 action-packed single-player levels, as well as 78 additional challenges that are unlocked as you progress through your overall mission to liberate Earth.

– IRONFALL Invasion: Multiplayer allows for up to six players to face-off in local and online multiplayer scenarios, with 6 different arenas, classic modes from “3 vs. 3” to “free-for-all”, and even the ability to bet in-game credits, which are tied to a player’s XP and rank, on your chances of winning a match. On top of this, a Survivor mode gives you the chance to train solo and hone your skills against CPU-controlled opponents within a variety of time-based scenarios.

Downloadable from Nintendo eShop, fans can purchase either mode separately for £8.88 ( €9.99****) each, or the entire game for £17.98 (€19.98). Fans purchasing both modes separately will gain access to a new multiplayer weapon, the HR pistol, while those purchasing both modes together as one bundle will receive the HR pistol plus a Jukebox feature that allows you access to the game’s soundtrack. However, free content will be available to all players from launch, with the chance to sample the first level of IRONFALL Invasion: Campaign plus the local and online multiplayer features of IRONFALL Invasion: Multiplayer, including one multiplayer arena and a limited number of characters and weapons when compared to the purchasable mode.

To learn more about the game and the team of talented developers behind its release, a new developer interview feature with the team can be viewed at: http://youtu.be/Xxmpk75M7Bs. For a further taste of the battle lying ahead, the game’s launch trailer can also be checked out at: http://youtu.be/RTFvI1nSZ3s .

Nintendo UK on Twitter https://twitter.com/nintendouk
*Wireless internet connection required. The registration of Nintendo Network ID and acceptance of the network related terms and privacy policies required.
** Game runs in 60fps when 3D is turned off on a user’s system.
*** While not a requirement to play the game, IRONFALL Invasion is also fully compatible with the Circle Pad Pro accessory, sold separately to the hardware.

Posted on 7 years ago by Kirara Koneko(@KiraraKoneko) in 3DS eShop, Videos | 0 comments

Circle Entertainment to release Kami on the 3DS eShop Feb. 5

Kami, Circle Entertainment’s puzzle game will release for the 3DS eShop on February 5, 2015.

KAMI is deceptively simple: fold out colored paper to fill the screen in with few moves as possible.

Relaxing and easy to pick up, you’ll soon find yourself deep in contemplation to perfect each puzzle.

Created by State of Play, famous for their handcrafted aesthetics, KAMI has been created with real paper in an elegant Japanese theme.

KAMI is tactile, engaging and stunning to look at.

Premium Puzzles and Hints are included.

Check out the screenshots below.