Capcom has shared a pair of Japanese Ace Attorney 6 commercials. Both can be seen below.

Update: The fine folks over at Court-Records have discovered something interesting; Capcom published more pictures of the LE contents, including a poster set. One of the posters depicts pixel art of the characters found in the game, and among them is a character from a previous Ace Attorney game: Ema Skye. Now, this isn’t a 100% official confirmation that she will be in the game, but it does seem quite likely that the scientific investigator will be in Ace Attorney 6. 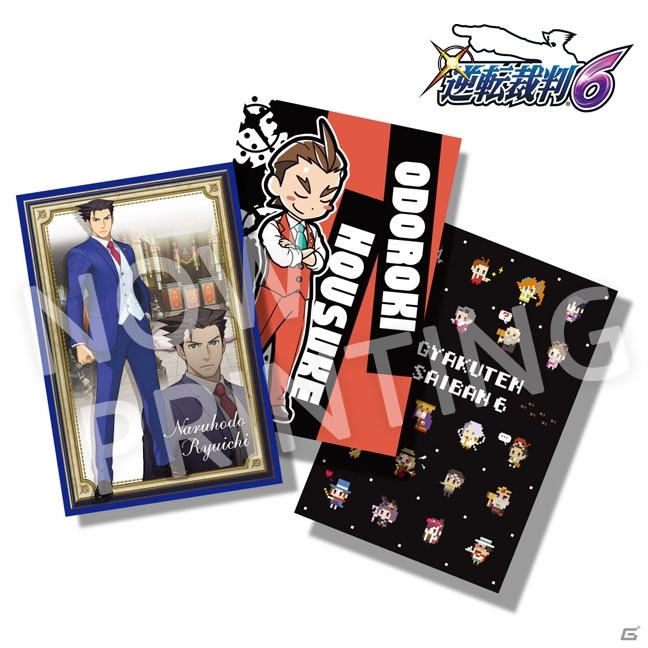 Capcom has revealed the first images of the special edition of Ace Attorney 6, as well as a Limited Goods Set, which comprises of the physical merchandise from the special edition (but not the game itself). Both of these are exclusive to the Japanese e-Capcom store include a newly-written original drama CD, a visual postcard book, Bokuto’s tote bag, a Kuttari plushie, and an original box. The special edition not only includes the game, but also e-Capcom-exclusive first print bonus: Phoenix Wright: Ace Attorney 6 acrylic dot mascot, a limited bonus of 2 short stories titled “Asoberu! Gyakuten Gekijou”, and, for early buyers, three “Special Costumes.”

The special edition costs 9,100 yen, and the Limited Goods Set costs 4,800 yen. The standard edition of the game is also available for pre-order for 5,800 yen, and includes the 6 acrylic dot mascot, “Asoberu! Gyakuten Gekijou”, and the Special Costumes.

Posted on 3 years ago by Brian(@NE_Brian) in General Nintendo, Videos | 2 Comments

We posted the Ace Attorney 6 anime prologue a few days ago, but it may not have been too worthwhile for those who can’t understand Japanese. MegamanNG has since made a video available with English subtitles, which you can watch below.

Thanks to Zach for the tip.

Update: The embedded version of the video now has subtitles, thanks to court-records.net!

Thanks to an ongoing Twitter campaign, Capcom has released the 8-minute long animated opening to the upcoming Ace Attorney 6. Note that the video is only available in Japanese and does not currently feature subtitles.

Posted on 3 years ago by Brian(@NE_Brian) in 3DS, News, Screenshots | 3 Comments

Capcom published another round of Ace Attorney 6 details and screenshots today. We have content for how the story begins, new character Potdino, and the puppy Mitamaru. You’ll find everything rounded up below, courtesy of Gematsu.

What happens when Phoenix Wright first visits the Kurain Kingdom?

– To meet up with the Maya Fey, who is in training, Phoenix Wright visits the Kurain Kingdom
– Goes sightseeing in the streets of Kurain with tour guide Bokuto Tsuani while waiting for Maya to finish
– As this happens, the Kurain Kingdom’s prized treasure, the “Jewel of the Founder,” is stolen
– Its guard is murdered as well
– There’s testimony from chief priest Potdino who is said to have witnessed the incident
– Bokuto is arrested on charges of theft and murder by means of the “”Oracle of the Spirit” who projects what the victim saw just before his death

What the heck is the “Crime of Defense?”

– The courtroom of the Kurain Kingdom is a spiritual medium trial absent of lawyers
– There is no room for the accused to explain their case—they’ll be “guilty”
– Phoenix Wright believes in Bokuto’s innocence
– He volunteers to defend Bokuto to prevent that from happening
– As soon as Phoenix distinguishes himself as a lawyer, his attitude completely changes
– He despises Phoenix and will not speak the truth
– If he continues his defense, he’ll be accused of a the “Crime of Defense”

– Devout follower of the Kurain faith
– Chief priest of the Jiin Temple
– Calls his “damaran,” an instrument of the Kurain people, his partner, and performs the musical accompaniment to Leifa’s Dedication Dances
– Fascinates the audience listening to the trial and even the presiding judge as he sings the music of his people while testifying
– He says he saw the scene where Bokuto killed the victim, but…

– Puppy raised by Bokut
– Normally completely inside Bokuto’s bag
– But when Bokuto is in a pinch, it gallantly leaps out and barks at the Bokuto’s opponent
– Adorable and faithful
– Prideful Tibetan Mastiff
– May play a surprisingly big role

The official Japanese Ace Attorney 6 boxart is now in. You can see what the packaging looks like above.

Posted on 3 years ago by Brian(@NE_Brian) in 3DS, Screenshots | 3 Comments

Capcom has brought out several new screenshots from Ace Attorney 6, including a few images of the anime opening. Check them out in the gallery below.

We have three more videos for Ace Attorney 6. Below, you’ll find the second trailer with English subtitles, the entire stream recording from last night, and a bunch of gameplay from the web demo.

END_OF_DOCUMENT_TOKEN_TO_BE_REPLACED

Capcom has published the second Ace Attorney 6 trailer, showing various characters including the return of Maya Fey. You can view it below.

We also have a video, attached below, that highlights the purchase bonuses consumers can take advantage of. These include two pre-order episodes and special costumes.

Those who are interested in getting an early look at Ace Attorney 6 can give the brand new web demo a try here.

Ace Attorney 6 will release on June 9 in Japan, Capcom announced today during a live stream event. The packaged version will go for 5,800 yen while the digital version will cost 5,546 yen.

Capcom is planning on packaging a costume for Phoenix Wright, Apollo Ace, and Athena Cykes as a first-print bonus. Two scenarios will also be available with copies of the game via pre-order.

Ace Attorney 6 is also getting 3DS themes via pre-order bonuses at Japanese retailers: 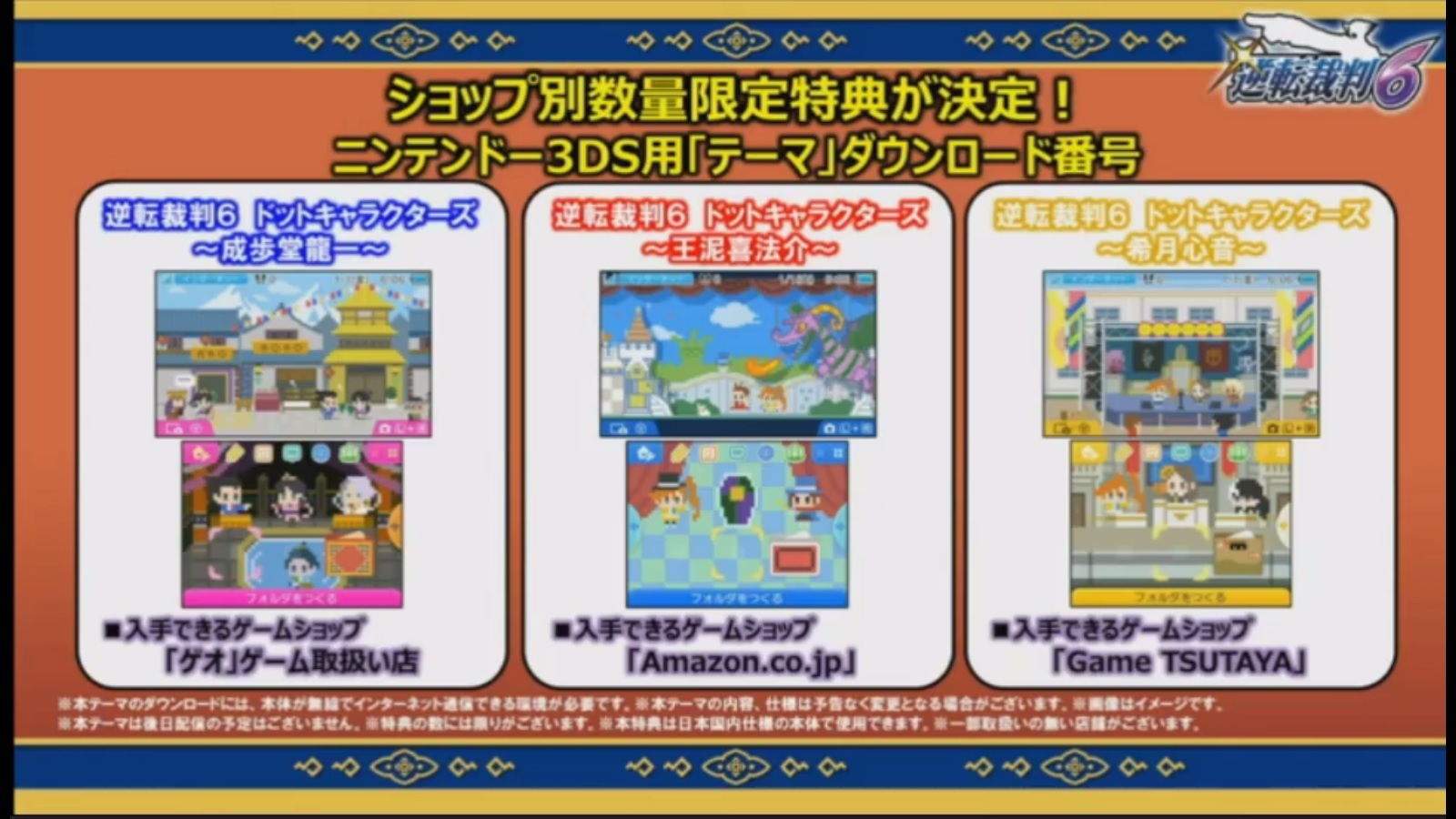 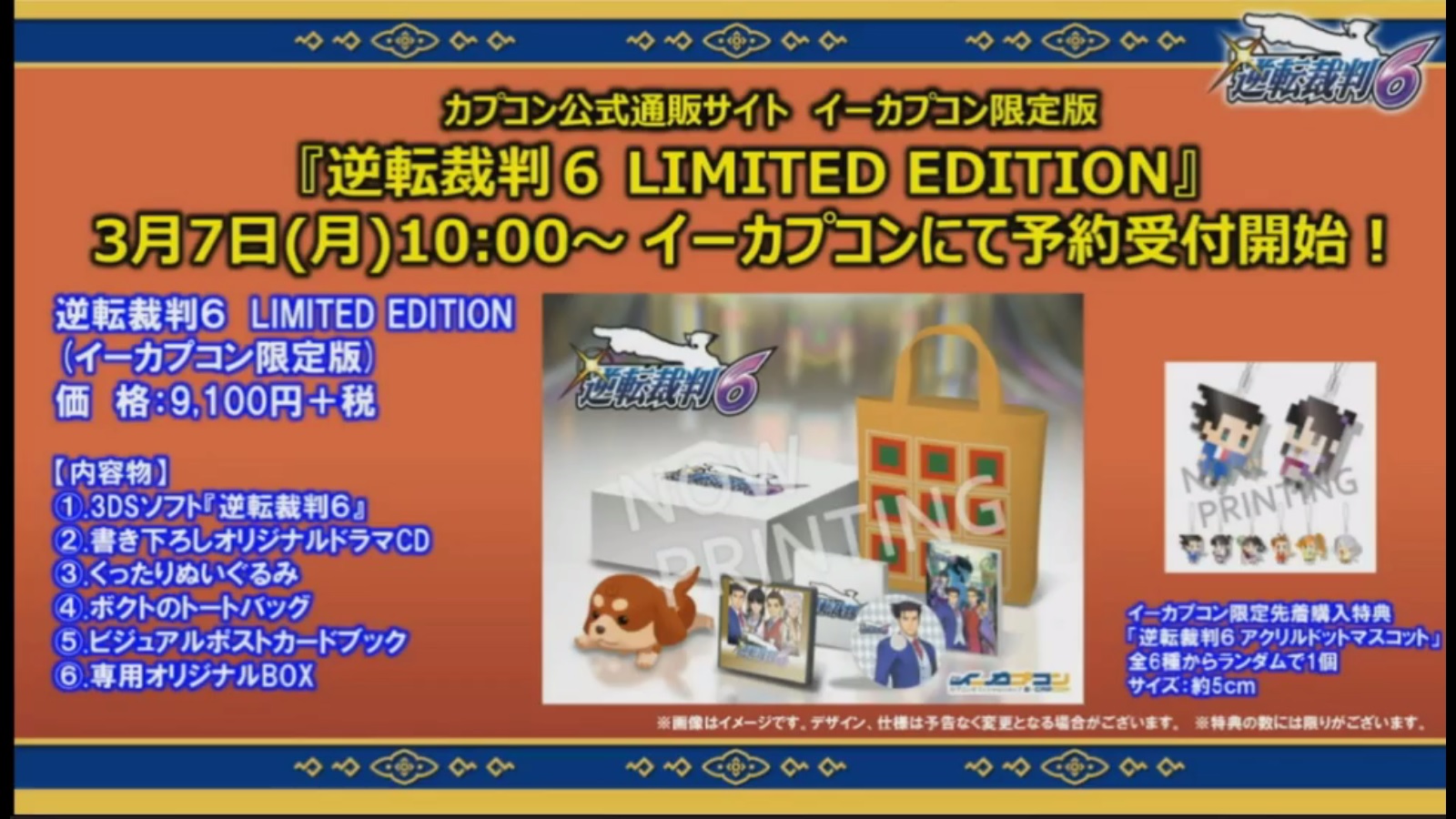