Capcom sent out the latest details about Ace Attorney 6 today. The information has been rounded up below, thanks to Siliconera’s translation.

– Once again, Phoenix’s stage will be set at the Kurain Kingdom
– Apollo’s stage will take place in Japan
– Kurain Kingdom is a country of mystery and faith
– The people follow a “Kurain Religion” which follows the concept of spirits and mediums in their everyday life
– The country is run a queen who is also a medium
– The Kurain Religion is a religion that shares a faith in the spirits of ancestors
– They have a deep connection with mediums
– Most of the citizens follow this religion
– Inside the Jiin Temple, you’ll find the Kurain Supreme Court, where everything is ruled by the “Divine Message of the Spirits”
– After getting chased out of the Japanese legal world, Gaspen Payne drifted off to the Kurain Kingdom, where he’s been enjoying his time as an undefeated prosecutor
– He’ll face Phoenix and try to take advantage of being on unfamiliar grounds
– Leyfa Padma Kurain is the princess medium of Kurain where Phoenix visits
– She has a sacred and strict aura around her. Using the powers of a medium
– Can see the victim’s last moments before death, and depict it in court as the “Oracle of Spirits” – – – Using these powers, she’ll get in the way of Phoenix in the court of Kurain
– Using her Oracle of Spirits powers, Leyfa holds a ritual that can only be held by those of the Kurain Kingdom
– During this said ritual, she performs and elegant holy dance
– After the dance,the victim’s last moments are shown on the “Water Mirror” located in the middle of the Kurain Supreme Court
– The Water Mirror also shows letters that tell the deceased’s senses felt before death
– Oracles are said to give the “words of the gods”
– What is shown on the Water Mirror cannot be disputed, especially in the religious country and its ruling medium, there’s no room for doubt
– While Leyfa’s visions from the Water Mirror is absolute for the people of Kurain, there seems to be some kind of contradiction going on
– Phoenix will have to find a way to fight against it
– You’ll see various messages show up on the Water Mirror, which will let you keep re-watching it as many times you need to until you find what was wrong

Posted on 4 years ago by Brian(@NE_Brian) in 3DS, Screenshots | 3 Comments

Following Famitsu’s latest coverage of the game, Capcom published official screenshots and art from Ace Attorney 6. Take a look at today’s images below.

Capcom has released the first Ace Attorney 6 trailer in celebration of the 2015 Tokyo Game Show. We’ve posted it below.

Posted on 4 years ago by Brian(@NE_Brian) in 3DS, Screenshots | 3 Comments

Meanwhile, we also have the first screenshots from Ace Attorney 6. Those are below.

Additional information about Ace Attorney 6 has been translated from the pages of this week’s Famitsu. You’ll find the details rounded up below.

– Once again, the game is set in a foreign country which Phoenix visits “for a certain goal”
– The old Wright luck kicks in and he finds himself wrapped up in a certain case when his tour guide is arrested
– Phoenix goes to see the trial
– When there, he sees there’s no defense attorney and the judge is relying on things like an “oracle of spirits” to hand down a guilty verdict immediately
– Phoenix objects and takes the defense’s bench
– In the game is the mysterious, strong-willed woman in the art
– This woman is neither a witness nor a prosecutor nor a judge
– She’s this game’s “key person” like Athena in AA5
– Note that it does not say she’s Phoenix’s assistant, just reuses the “key person” term
– The “water mirror” in the courtroom plays a part in a new system they’re keeping under wraps
– The magazine also seems to suggest there may be other small changes from the usual courtroom antics
– This new system will be playable at TGS 2015
– In this country, there are prosecutors, but no defense attorneys
– Defendants must use a “certain object” to defend themselves
– The game’s theme is a “courtroom revolution”
– The team felt Phoenix was in a position where he didn’t really have anyone who could match up to him in Japan, so that was part of the reason they moved him into the wider world
– They also hope that trials in a court where the usual “rules” don’t play will help give a sense of urgency to the game that they couldn’t get in just a plain Japanese trial
– Devs have heard complaints about Ace Attorney 5 being too easy due to the many hints characters gave
– With this game, they’re aiming to let the player enable/disable hints on their own, and to avoid direct clues like in AA5
– Development is still fairly early on
– The team wants to make a game to surpass the previous entries, and to “betray the player’s expectations – in a good way!”

A new female character spotted in the first round of scans is featured prominently in multiple images, although there is no information about her identity yet. She appears to be objecting to a hastily-passed verdict.

Translations of multiple quotes from the scans are now also available:

– The theme is “courtroom revolution”
– You can turn off hints!
– Development on the game is 30% complete

What’s the theme and concept of Ace Attorney 6?

Takeshi Yamazaki, director: “Throughout the series, Phoenix Wright is in a place that lacks enemies. Because of that, we’re paying more attention to the world this time.”

Eshiro Motohide, producer: “It’s tough to develop within the Japanese courtroom, since an exhilarating part of the game is how situations can change from from desperate to complete turnabouts. The theme is ‘courtroom revolution.’ Phoenix Wright changing the system of the court is a major theme.” 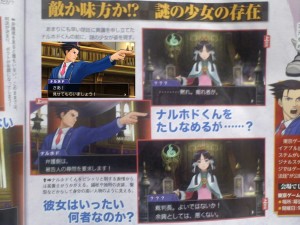 The first scans of Ace Attorney 6 have surfaced from this week’s issue of Famitsu.

According to the magazine, the game takes place outside of Japan. Phoenix Wright has come to the unnamed country for a reason, but he gets involved with another case. Residents of the country apparently believe in the spirits of the dead. A big Water Mirror (mizukagami) can be seen in their courtrooms on the floor. On the upper 3DS screen, there are images and words floating in the water. The touch screen seems to show part of a testimony and the option to present something.

Famitsu also introduces us to a boy who goes by the name (roughly) Bokto Tsuani. Bokto is a monk-in-training who works as a tour guide to make some money. It’s said that after starting his tour-guide-talk, he can’t be stopped. 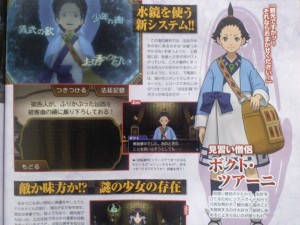 Ace Attorney 6 confirmed for the west

Earlier today, Ace Attorney 6 was revealed by Famitsu. We now have confirmation that the game will be releasing in overseas territories.

“Ace Attorney 6 (working title) will be coming to the west,” Capcom said in an official statement. “We’ll have more information on the Western release soon.”

It is not yet known if the previous Ace Attorney game, The Great Ace Attorney, will be localized.

Posted on 4 years ago by Matt(@OnePunchMaz) in 3DS, News | 10 Comments

The latest Ace Attorney spin-off game, The Great Ace Attorney (Dai Gyakuten Saiban) was just recently released in Japan. Seems like Capcom aren’t resting on their laurels though – the next mainline Ace Attorney game has just been announced. Famitsu revealed that the title will be playable at Tokyo Game Show this year.

Naturally it’s a 3DS game.  The game is spearheaded by producer Motohide Eshiro and Takeshi Yamazaki, both of them series veterans.

We will keep you updated.