How did Nintendo platforms perform on Black Friday, the biggest shopping day of the season in the United States? We won’t receive any specific numbers until the next NPD report in December, but research firm Infoscout has offered some data. Check out the images above for their findings.

Amazon officially began its Black Friday 2014 deals earlier today. Most of the significant Nintendo-related sales will be delegated to Lighting Deals, but there are a few things on the side as well.

You can purchase games such as:

Scribblenauts Unlimited (Wii U) for $10

Scribblenauts Unmasked (Wii U) for $10

The LEGO Movie Videogame for $18

Transformers: Rise of the Dark Spark for $15

Injustice: Gods Among Us for $14

The Legend of Korra: A New Era Begins for $15

Teenage Mutant Ninja Turtles: Danger of the Ooze for $15

Conception II: Children of the Seven Stars for $21

(code works on other books as well)

. We’ll be seeing things like Smash Bros. for Wii U with $15 credit, and sales for Mario Kart 8, Mario Kart 7, Super Mario 3D Land, and Sonic Boom: Rise of Lyric.

Unfortunately, there aren’t a whole lot of notable deals here. You can save $10 on Sonic Boom: Rise of Lyric… but you’d probably be better off not buying the game at all.

In any case, you can find the Nintendo-related items from GameStop’s Black Friday ad above. 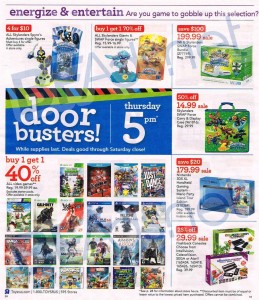 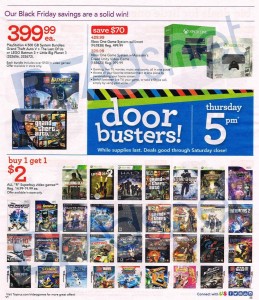 Toys “R” Us is the latest retailer to have revealed its deals for Black Friday 2014. There aren’t quite as many notable offers compared to other retailers, but there are a few things – such as buy 1, get 1 40% off all games.

You can find all of the gaming-related deals from Toys “R” Us in the ad above.

Highlights include Mario Kart 8 for $35 and Wii Party U for $25. A New Super Mario Bros. 2 Gold Edition 3DS XL bundle will also be made available for $150.

You can find Walmart’s entire lineup of Black Friday deals above.

Best Buy has come forward with its lineup of deals for Black Friday 2014. You can get a look at the Nintendo-related offers below.

All of these prices are officially from Best Buy. It seems this is a preview, so we may not know of all sales at the moment. 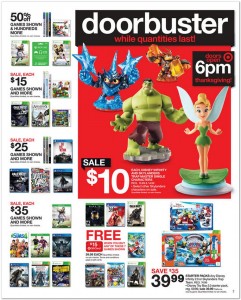 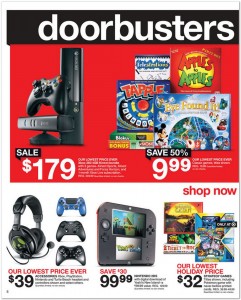 The entire Black Friday ad for Target has arrived, and there quite a few deals for Nintendo gamers.

There are a few other Black Friday gaming deals from Target as well. View the attached images above for all of the offers.