Yooka-Laylee’s Kickstarter campaign has been updated with yet another stretch goal. At £2 million, the studio will prepare DLC that will be free to backers. This content will only be created once the game itself has been completed.

Playtonic wrote in a Kickstarter update:

Smashing it up like a student in Yates’s, Yooka-Laylee backers have strawpedo’d their way through the latest stretch goal, and so now an orchestral soundtrack will be enjoyed by all. But before you stumble towards the high street intending to disseminate a large donner meat and chips – wait, because there’s more…

The entire Playtonic team would like to offer its sincere thanks to everyone who has backed the Yooka-Laylee campaign so far. Our intention from the beginning was to use Kickstarter as a means to improve our game, and by helping us reach an incredible £1.5 million you’ve shaped it into one fine specimen.

From the start of the campaign we also pledged to do best by your amazing support by only setting stretch goals that would improve the game, without negatively affecting core development.

Our next stretch goal, if reached, will be used only to further improve and polish Yooka-Laylee, and give something back for your amazing support. Namely, we’ll release our first post-release DLC pack free of charge for all backers.

When – and only when – we’ve finished and shipped the full version of Yooka-Laylee, we’ll start work on additional content that will be distributed to backers free of charge for their platform of choice. And again, all additional funding will of course go towards improving and polishing the game.

You can donate to the Yooka-Laylee Kickstarter campaign here. It ends on June 16.

Choose from a cross-section of top current indie music artists, then defend your stage from hordes of quirky aliens by tapping to the music and using a fun assortment of makeshift weapons like speakers, strobe lights, fog machines, amplifiers, bouncers and custom special attacks!

LOUD on Planet X is an exciting new indie alternative to Rock Band or Guitar Hero with a splash of Plants vs Zombies – a new hybrid of rhythm game and classic shooter with tower defence elements.

Yooka-Laylee is an all-new 3D platformer from the creative talent behind the Banjo-Kazooie and Donkey Kong Country games. We’ve come together to form Playtonic Games and create a spiritual successor to our most cherished work from the past!

Our new heroes, Yooka (the green bloke with no pants) and Laylee (the wisecracking lady-bat with the big nose) were conceptualised from the ground up for stellar platforming gameplay, created by the same character artist behind the rebooted Donkey Kong family and legendary N64 heroes Banjo and Kazooie.

Sydney Hunter and the Caverns of Death – already funded, Wii U stretch goal at $35,000

Sydney Hunter and the Caverns of Death is a new retro-style adventure/puzzle platformer for the Super Nintendo Entertainment System. Armed only with his trusty boomerang, Sydney must navigate dark caverns while avoiding bats, ghosts, hot lava and other obstacles. If you can survive all 10 caverns, you will be able to win your freedom.Your support for this Kickstarter campaign will help bring a new game to one of the most beloved systems of all time…the SNES. You also have an opportunity to receive some cool rewards available exclusively through this Kickstarter campaign.

Yooka-Laylee’s Kickstarter success is no secret. The campaign reached its $270,000 target in under an hour, and has gone on to raise over $2.1 million.

The strong support demonstrated for Yooka-Laylee is leading to a couple of records. First, the title reached $1 million in funding faster than any other game on Kickstarter. It’s also on track to be the most-successful game campaign in the UK.

Developer Playtonic confirmed on Twitter a few minutes ago:

Just in from @kickstarter: #YookaLaylee hit $1M funding faster than any other game & on course to be UK's most successful game campaign

The Yooka-Laylee Kickstarter is located here. Amazingly enough, there are 41 days left before it ends!

Posted on 4 years ago by Brian(@NE_Brian) in News, Wii U eShop | 2 Comments

Posted on 4 years ago by Brian(@NE_Brian) in News, Wii U eShop | 6 Comments

Yooka-Laylee’s Kickstarter hasn’t slowed down since launching on Friday. The campaign has smashed through another two stretch goals within the past day or so. Playtonic will now create a N64 shader mode, a credits “GK Rap + Video” written by Grant Kirkhope, and a developer walkthrough/commentary video.

Yooka-Laylee is closing it at nearly $1.9 million on Kickstarter. 44 days remain before the Kickstarter campaign ends, so there’s plenty of time for additional stretch goals. The latest one, coming in at £1.5 million, will allow for an orchestral score.

Head on over to this page for the Yooka-Laylee Kickstarter.

Playtonic’s Yooka-Laylee Kickstarter hasn’t slowed down since launching yesterday. The campaign has now raised over £1 million, and all stretch goals have been reached. Yooka-Laylee had already been guaranteed for Wii U, but thanks to the Kickstarter success, it will be on the platform day-one alongside all other consoles.

£1 MILLION! #YookaLaylee will release day-one on Wii U, PS4, Xbox One, Mac, Linux and PC! pic.twitter.com/Y0H3Y1cNjQ

Here’s a look at all cleared Kickstarter stretch goals: 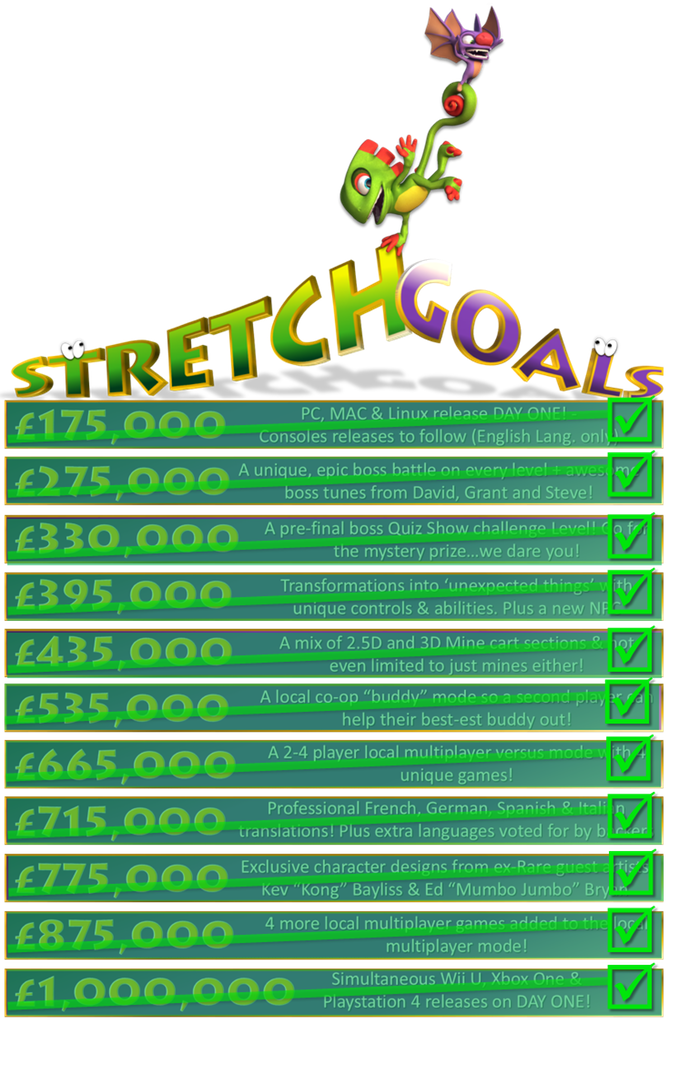 Next up for Yooka-Laylee is a N64 shader mode and a credits “GK Rap + Video” written by Grant Kirkhope. This will be confirmed at £1.1 million. Also planned is a developer walkthrough and commentary video at £1.2 million.

You can check out Yooka-Laylee on Kickstarter here.

Yooka-Laylee reaches Kickstarter funding goal in under an hour

Yooka-Laylee may end up as one of the most-successful video game-related projects on Kickstarter. Playtonic just launched the campaign at 12 PM ET / 9 AM ET, and has already secured funding. The team was looking to raise £175,000 ($270,041) and that mark has already been surpassed.

Yooka-Laylee’s Kickstarter has several stretch goals planned. These include 2.5D/3D mine cart sections at £435,000, a two to four-player local multiplayer versus mode at £665,000, and a simultaneous day-one console launch on Wii U and other platforms at £1,000,000.

You can find the Yooka-Laylee Kickstarter campaign here.

Playtonic has now launched its Kickstarter campaign for Yooka-Laylee. Check it out here.

Also note that Cross Code is in its final funding hours on Indiegogo. If funds hit €100,000, the game will come to Wii U. The campaign has generated over €87,000 thus far.

We’ll also once again mention CrossCode, though it’s on Indiegogo. If funds reach €100,000, it will be on Wii U.