Three new games have been confirmed for the Japanese 3DS Virtual Console. Gradius (PC Engine), The Kung Fu (PC Engine), and Mega Man Xtreme 2 (Game Boy Color) will be out on December 25. Pricing is set at 600 yen each.

Three new Virtual Console games are on track for the Japanese Wii U eShop next week. Super Mario Bros. 3 (Famicom), Parodius (MSX), and Bonk’s Adventure (PC Engine) will be out on December 25. Pricing is set at 500 yen, 800 yen, and 600 yen respectively.

Posted on 6 years ago by Brian(@NE_Brian) in 3DS, General Nintendo, Videos, Wii, Wii U | 2 Comments

Atlus has revealed new details for Conception II: Children of the Seven Stars. Here’s the latest:

– Protagonist is known as God’s Gift
– “someone overflowing with the Star God’s power, and… the only change humanity has at repelling the monsters emanating from the Pandora Labyrinth that threaten the world”
– Nurture relationships with characters
– Pay close attention to the relationship God’s Gift has with each of the game’s seven heroines, and you can benefit greatly
– Heroines happy with God’s Gift will help him make Star Children

Those who pre-order Conception II

will receive a special box for the game and a 10-track CD soundtrack. The official boxart and new screenshots can be found above.

Catch a #NintendoDirectNA 12/18 at 6am PT focused on #WiiU and Nintendo #3DS software coming through spring 2014. http://t.co/KeVUFUOgHl

Join us on 18/12 at 3pm CET for a #NintendoDirectEU focusing on #WiiU & Nintendo #3DS titles releasing by spring 2014 pic.twitter.com/lPwqq9PKma

Nintendo has announced a Nintendo Direct presentation for both North America, Europe, and Japan. The presentation will be held at 9 AM ET / 6 AM PT.

According to the Big N, Wii U and 3DS titles due out by spring 2014 will be showcased. That likely means we’ll be seeing more of Donkey Kong Country: Tropical Freeze, Kirby Triple Deluxe, and more. 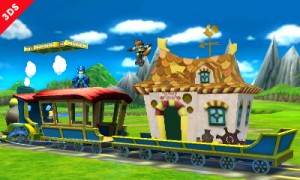 In the train stage, the rear car can change during battle. It’ll detach and move backward, so be careful! This pic features the Linebeck Trading Company, which is being transported for some reason.

This week’s 3DS eShop charts are as follows:

This week’s Wii U eShop charts are as follows:

Bravely Second has a magic academy

Reports emerging from Japan reveal that Bravely Second will include some kind of magic academy. The prime minister of Lakrika ordered the academy to be built, which is said to be a full town or city. Its location is on the continent of Nadarakes.

Scholars and students from different regions visit the academy to explore and debate new magical theories… and learn a few things as well. The academy is also where new forms of systems and magic are being developed.