Shin’en has been saying for awhile now that it wants to get Nano Assault EX out this year. That’s still the plan, according to a message posted on the studio’s Twitter account.

The company posted the following when asked about the status of Nano Assault EX:

“Nano Assault EX should be available on the eShop in a few weeks, hopefully still in 2012.”

Posted on 8 years ago by Brian(@NE_Brian) in 3DS eShop, DSiWare, Videos | 0 comments

Posted on 8 years ago by Brian(@NE_Brian) in 3DS eShop, DSiWare, News | 0 comments

Another round of upcoming digital downloads have been rated and priced. The full listing can be found below, and more details are at the included links.

Remember Nintendo’s 8-bit Summer promotion? Sonic Labyrinth and Sonic Blast were originally intended to be released during the time of its campaign, but neither game landed on the 3DS eShop.

That should be changing soon. The eShop has been updated and both titles are said to be coming soon. Each will cost $4.99 when they are finally made available.

Unchained Blades came out on North American PSN (PSP) months ago. The 3DS eShop version, however, has been in limbo.

Publisher XSEED says it is “struggling” to release the 3DS edition. Having said that, the company hopes to finally launch the game next month.

And what about the sequel, Unchained Blades Exiv? Once the original game comes out on the eShop, XSEED may begin to consider localizing on the follow-up.

Crashmo™ – Embrace the laws of gravity with a whole new kind of action-puzzle play in this exciting sequel to the critically acclaimed Pushmo™ game. New gravity mechanics and gadgets like floating blocks, doors and move switches await players ready for a challenge. (For Nintendo 3DS™)

Zelda II™: The Adventure of Link™ – Link™ returns to Hyrule on a quest to find the Triforce of Courage and awaken Zelda™ from an endless sleep. Learn magic spells, talk to people in towns to get clues, collect items to increase your power and explore seven palaces where the underlings of the evil Ganon await you. (For Nintendo 3DS)

END_OF_DOCUMENT_TOKEN_TO_BE_REPLACED 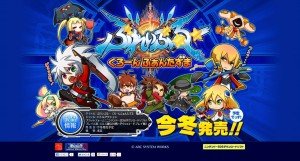 There’s nothing to see yet aside from a bit of artwork, but look forward to updates in the near future.

This week’s Japanese 3DS eShop update is as follows:

No plans to bring Braid to the 3DS, but maybe the Wii U eShop in the future

There are no plans at the moment to bring Braid to the 3DS eShop. But Wii U? That’s a slightly different story.

Although main designer Jonathan Blow says “we are really busy right now”, he has left the door slightly open for a possible Wii U eShop version sometime down the line.

“Braid: 3DS, no. Wii U, maybe sometime in the future but we are really busy right now.”