The Fall Part 2: Unbound officially announced for Switch, no longer planned for Wii U

Posted on 4 years ago by Brian(@NE_Brian) in News, Switch eShop | 8 Comments

The Fall Part 2: Unbound was one of a few titles pictured in Nintendo’s big Nindies infographic from its February showcase. Today, developer Over The Moon followed up on that with an official announcement.

The Fall Part 2: Unbound will be on Nintendo’s new console, but plans for Wii U have been scrapped. Over The Moon said the following regarding the decision:

“We’re coming to the Nintendo Switch! This is great news obviously, but it also appears that Nintendo is switching (hah) focus to promoting that platform over the Wii U. For that reason we’ve decided to focus on resources on supporting the Switch instead of the Wii U. As indies, we simply don’t have the luxury of supporting a platform that’s clearly being sunsetted. I was confident that we’d make it in time, but everyone’s moving on to greener pastures and we’d be fools to stay behind.”

We’ve posted today’s lengthy announcement about the game after the break. A new story trailer for The Fall Part 2: Unbound can also be viewed below.

END_OF_DOCUMENT_TOKEN_TO_BE_REPLACED

More: indie, Over the Moon, The Fall Part 2: Unbound

Video: Playtonic plays through the opening stages of Yooka-Laylee and talks about the game

Posted on 4 years ago by Brian(@NE_Brian) in Switch eShop, Videos | 1 Comment

At EGX Rezzed this weekend, Playtonic stopped by for a developer session. The studio played through the title’s opening stages and also talked about making the project in-depth. We’ve posted the full recording below.

Samurai Shodown IV is next week’s NeoGeo game on Switch

Posted on 4 years ago by Brian(@NE_Brian) in News, Switch eShop | 9 Comments

We’re not yet sure what this week’s NeoGeo game on Switch will be, but we do already have news about next week’s release. According to a listing on the European eShop, Samurai Shodown IV is scheduled for April 13. It will cost $7.99 / €6.99 / £6.29. 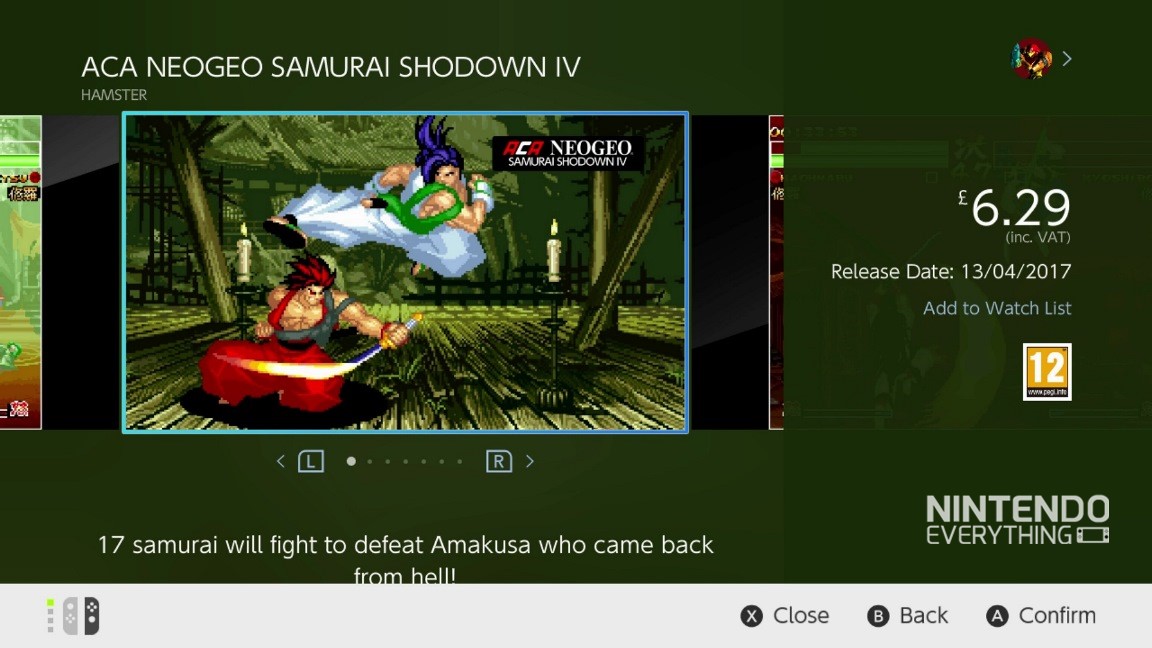 Posted on 4 years ago by Brian(@NE_Brian) in 3DS eShop, News, Switch eShop | 16 Comments

AeternoBlade II was announced in late 2015. Corecell Technology originally intended to bring the game to 3DS, but those plans have since been scrapped. It’s now targeted for Switch due to the team incorporating Unreal Engine 4.

In other news, the art team behind AeternoBlade II has resigned. Corecell Technology will be looking for support from the community when it opens an Indiegogo campaign “soon”.

END_OF_DOCUMENT_TOKEN_TO_BE_REPLACED

Posted on 4 years ago by Brian(@NE_Brian) in News, Switch eShop | 1 Comment

Posted on 4 years ago by Jakob Vujovic(@jakovujo) in Reviews, Switch eShop | 15 Comments

There are a lot of short tips that cycle through the brief loading screens of Snake Pass. The most helpful was perhaps the most obvious: “Remember, think like a snake.” I wouldn’t be entirely satisfied categorizing this as a physics-based puzzle game. Calling it a platformer is closer, but you can’t jump. Stick this game into any established category and you’ll find that its slithery nature slips right back out. Snake Pass is, mechanically speaking, a sort of deconstruction of the 3D platformer. It’s not quite like anything I’ve ever played.

END_OF_DOCUMENT_TOKEN_TO_BE_REPLACED

Posted on 4 years ago by Brian(@NE_Brian) in Switch eShop, Videos | 4 Comments

Graceful Explosion Machine is making its way to the Switch eShop next Thursday. For an early look at the game, view the video below containing 31 minutes of footage.

Posted on 4 years ago by Brian(@NE_Brian) in Switch eShop, Videos | 16 Comments

Yesterday, Playtonic and Yooka-Laylee composer Grant Kirkhope teased a new tune for the game that would be taking inspiration from Donkey Kong 64’s DK Rap. That’s now been published online.

Kirkhope and Playtonic have created a new piece of music in the style of DK Rap, aptly titled the Yooka-Laylee Rap. Watch the video and listen to the song below.