Famitsu’s full Bravely Second interview with producer Tomoya Asano and character designer Akihiko Yoshida is now available in English. You can find some experts below and the full translation here.

END_OF_DOCUMENT_TOKEN_TO_BE_REPLACED

Another wave of Bravely Second details have come out of this week’s Famitsu. Producer Tomoya Asano and character designer Akihiko Yoshida discussed the game’s various aspects, including:

We also have the following quotes from Asano:

“There were actually several concepts, but out of all of them, the idea of ‘surpassing the previous title’ left the biggest impression. We were aware that the previous title was to get fans to like the characters and world, so we decided to have a sequel that takes place several years later, and has more to do with Luxendarc.”

“As we did previously, and for the sake of Japanese RPG fans, we’re developing with the goal to create a new pillar of support for Square Enix, while surpassing the previous title. I believe that it may take a little while longer until you’ll get to play the game, but we’ll be revealing new information little by little, so I hope you continue supporting us while looking forward to what’s coming.”

Bravely Default contains a secret movie for Bravely Second, which can be viewed after the end credits. New character Magnolia – the star of Bravely Second – is highlighted in the video.

n this week’s issue of Famitsu, Bravely Second producer Tomoya Asano and character designer Akihiko Yoshida shared more details about the newly announced 3DS sequel. A roundup of information shared by the two can be found below.

– Magnolia is the game’s main protagonist
– Her role is similar to Agnes in Bravely Default
– Will travel with her at some point in time
– Character has been designed to look more adult than Agnes
– She and the other characters have slightly more realistic proportions
– Ringabel’s role in Bravely Second is currently unknown
– Bravely Second’s plot involves a “Demon King” and the moon
– These two elements are new additions related to the story
– Magnolia is a self-professed Demon King killer from the moon
– Her world will be one of the places in the game that you’ll get to explore
– A hint regarding these two plot points is hidden in the secret movie found in Bravely Default: For the Sequel
– Bravely Second’s fields are larger than those of Bravely Default
– Game’s “density” has increased as well
– Will adopt systems introduced in For the Sequel
– The tam may still make changes will in accordance with user feedback from that game
– 30% complete

Square Enix has shared some of the first details about Bravely Second, the true sequel to Bravely Default.

Bravely Second is set in Luxendarc – the same world as the first title – but several years after the Warriors of Light saved the world.

Magnolia Arch is one of the new characters players will encounter. This “Devil Buster” came from the moon, has a daredevil personality, and is the last of her kind after a Demon Lord unexpectedly appeared. Magnolia is also sociable, eccentric, pragmatic, and a romanticist. She’s dainty, but lively. Magnolia rescued Tiz Arrior at one point.

Square Enix has released the first Bravely Second screenshots, which you can find above. The game’s new teaser site is located here. 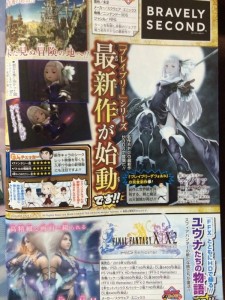 The latest issue of Jump has revealed Bravely Second, a true follow-up to Bravely Default set in the same world. New character “Magnolia” is introduced in the magazine. That’s all we have for now, sadly!