Posted on 4 years ago by Brian(@NE_Brian) in 3DS, Screenshots | 0 comments

Listings on VGMdb reveal details about soundtracks for both Xenoblade Chronicles X and Bravely Second.

Xenoblade Chronicles X’s soundtrack is due out on May 20 for 4,298 yen. Five CDs are included. We know that DefSTAR RECORDS is publishing the soundtrack, and of course, Hiroyuki Sawano is the composer.

Bravely Second’s soundtrack is apparently set to arrive on May 20 as well, though we don’t have pricing information currently. Two CDs are included. Additionally, Square Enix is publishing the soundtrack directly.

Famitsu has a big update on Bravely Second this week. Among other things, the magazine provides first information about the Chariot job.

The Chariot job is described as a physical attacker who can use all types of weapons. Their abilities include “Fighting Race”, which raises the aptitude for equipped weapon for regular attacks. There’s also “Three-sword School”. This allows them to wield three weapons temporarily.

END_OF_DOCUMENT_TOKEN_TO_BE_REPLACED

Square Enix is preparing a new 3DS theme for Bravely Second. By purchasing the game early, fans can obtain this special bonus – either physically or digitally.

A download code for the theme will be found on a special card included with Bravely Second (shown below), though quantities are limited. Those who buy digitally will receive a code on their receipts until May 31. 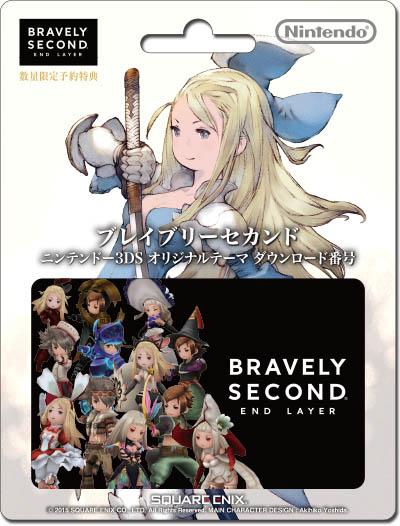 Posted on 4 years ago by Kirara Koneko(@KiraraKoneko) in 3DS, News | 2 Comments

In this weeks Famitsu issue we will be seeing an article that talks about some new information on Bravely Second: End Layer.

One of the new pieces of information we will see talks about new jobs:

In a new interview with Dengeki, Bravely Second producer Tomoya Asano and assistant producer Shinji Takahashi discussed the game’s new jobs (thanks Siliconera). The title introduces jobs such as Cat Master, Patissier, Exorcist, and much more.

Asano first spoke about jobs with the following words:

“Whenever we start thinking about new jobs, we start out by keeping the entire game’s balance in mind. We’d like to have this many attackers; there should be this number of offensive mages; let’s stick to this number for healers… these are some of the thoughts that go into the balancing. One important thing of the Cat Master in particular is how we created it to be a ‘playing around’ type [of class].”

Asano added that although Cat Masters were originally created just to have fun with, they ended up being pretty strong. They’re fine at attacking and can provide support.

Head past the break for even more job quotes!

END_OF_DOCUMENT_TOKEN_TO_BE_REPLACED

Posted on 4 years ago by Kirara Koneko(@KiraraKoneko) in 3DS, Images | 2 Comments

Posted on 4 years ago by Kirara Koneko(@KiraraKoneko) in 3DS, Videos | 0 comments

Getting the item is simple. 3DS owners need to play through the Bravely Second demo, open the Dragon Quest X Convenient Tool For Adventurers On the Go application, and select the option to receive a gift. The flower will then appear in the Dragon Quest X post office.

One of the cool parts about Bravely Default was its mini-game in which you would continuously add members to the town of Norende and help bring it back together via streetpasses and uploading data over wi-fi. Bravely Second brings the streetpassing mini-game back, only this time it takes place on new character Magnolia’s hometown, the moon.

Just like in Bravely Default,  you’ll be able to send and receive enemies. Nemeses are no longer a threat, however, as they are now replaced with Demon Kings that will show up to your moon base. Similar to the first, you’ll have the chance to defeat the Demon Kings and be rewarded with rare items.

Your base can be upgraded over time to help lower the levels and difficulty of the Demon Kings by using weapons called Busterships. A single shot of a Bustership is allowed at a time, however friends can provide you with additional Busterships, much like the additional specials that could be used from streetpasses in Bravely Default, assuming the player had uploaded their data with a special attached to their assigned character. You can level Busterships up to help decrease the level of a Demon King even further as well as decrease the cool down duration needed to fire another.