Atlus sent out a new media blast for Etrian Odyssey V today. That means we have new screenshots, art, and plenty of details pertaining to the game. All of the content is rounded up below, with translations coming from Gematsu.

– Arcadia is a land dominated by swords and magic
– A huge tree from ancient times called “Yggdrasil” exists here and is to be the reason that peace visits the world
– There is a legend about that World Tree
– If you can manage to reach its untrodden summit, it is said that your dreams will come true
– “The power to dominate the world.” “The most powerful.” “The world’s mysteries.” “Expensive treasures.”
– 4 races on the land
– Each has a different legend, but no person has been able to confirm them
– From the city “Aeolis” at the bottom of Yggdrasil, the official orders are issued
– In pursuit of the legend, the courageous adventurers who will challenge Yggdrasil gather in Aeolis
– Players take on the role of one of the adventurers in response to the official orders
– Challenge the labyrinths and aim for the top of the World Tree

END_OF_DOCUMENT_TOKEN_TO_BE_REPLACED

Persona Central has some Etrian Odyssey V footage up from Atlus’ live stream this weekend. Check out the various videos below.

END_OF_DOCUMENT_TOKEN_TO_BE_REPLACED

During yesterday’s Etrian Odyssey V stream, Atlus suggested that the title could be the last numbered series on 3DS. This reminded the staff about how Etrian Odyssey III was the last main entry on DS. Atlus is now concentrating and focusing its time on the game so they have no regrets.

Atlus showed the first full trailer for Etrian Odyssey V during a live stream held a short while ago. You can watch it in full below.

Atlus showed a new Etrian Odyssey V trailer during the Japanese Nintendo Direct a few hours ago. Personal Central took a recording of the video, which we’ve posted below.

Posted on 5 years ago by Brian(@NE_Brian) in 3DS, Images, Screenshots | 9 Comments

“Arcadia,” a land dominated by swords and magic. A huge tree from ancient times called “Yggdrasil” exists here and is to be the reason that peace visits the world.

There is a legend about that World Tree. If you can manage to reach its untrodden summit, it is said that your dreams will come true.

“The power to dominate the world.” “The most powerful.” “The world’s mysteries.” “Expensive treasures.”

Although there are four races that live in this land, each has a different legend, but no person has been able to confirm them.

From the city “Aolith” at the bottom of Yggdrasil, the official orders are issued. In pursuit of the legend legend, the courageous adventurers who challenge Yggdrasil will gather in Aolith. And in accordance with official orders, you’ll be the one to gather those adventurers.

Whether it’s for wealth and honor, or to satisfy your sense of adventure, you’ll challenge the labyrinths and aim for the top of the World Tree.

Atlus has revealed the boxart for Etrian Odyssey V – we have it above. You can also view the first official screenshots below courtesy of Amazon Japan.

We also have a look at a special CD being prepared for the game as a first-print bonus: 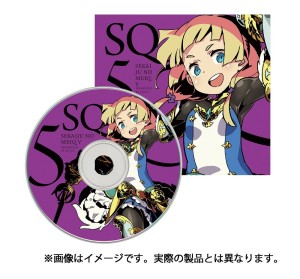 And the limited edition comprised of the game, art book, soundtrack, DLC, and special packaging. 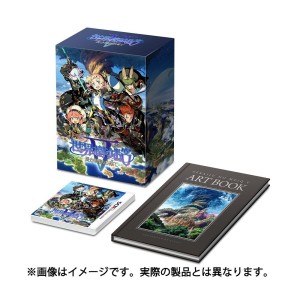 The first scans of Etrian Odyssey V have emerged from Famitsu. We should have better images tomorrow, but this does provide us with a look at the game. View them below, along with more details.

– Fencer ? Skillfully wield pointed swords
– Dragoon ? Boast of defense as tough as a dragon
– Cestus ? Clear through battles with their tempered fists
– Reaper ? Fell enemies with sickles that bring death
– Necromancer ? Summoners that command the spirits of the dead
– Warlock ? Sages skilled in elemental attacks
– Herbalist ? Masters of healing with herbs
– Shaman ? Use mysterious powers to save their allies
– Masurao ? Warriors that weld four swords
– Hound ? Hunters that command falcons and dogs
– New FOEs – Hyppogriph, Hyppogriph, Momonga, Oumu, some sort of millipede
– New character creation system
– Character creation is race-based
– Choose eye, skin and hair color regardless of your portrait design
– Class and race-specific skills
– Similar to how Common skills were handled in Etrian Odyssey III, skills that are universal for your character’s race are accessed via a separate tab in the Custom menu
– Customize the icon sets that appear on your map menu
– Party members can use team up to use Union Skills
– At least four portrait options per class
– There’s a mute option that spans two buttons
– There isn’t a single race skill; it’s an entire set of racial passives, some tiered, and most of which are single-level skills
– Fencer skill set also seems based around elemental chain and prediction/vision skills
– Summoning also doesn’t seem to use the sixth party slot, as one screen shows two aids in their own separate sections
– Both have HP bars, though no TP
– Aslan skill set includes fishing, analyze, double attack, magic heal, something about full power, and something about earth (ground)

Posted on 5 years ago by Matt(@OnePunchMaz) in 3DS, News | 4 Comments

Earlier today we’ve learned about Etrian Odyssey V’s release date and we now have some additional info from Famitsu magazine (thanks to Gematsu for the translation; make sure to head over to their site to read the full article).

Perhaps most interestingly, for the first time ever you will not only be able to decide which gender and class your characters are, but also which race they belong to. The game is set in the world of Arcadia, where there are four dominant races: the Arslan (basically humans), the elf-like Lunaria, the Cerian who have beast/animal-like ears and finally the dwarf-like Brani.

As far as classes go, 10 have been confirmed so far – however, it seems like which class a character can be is determined by the above-mentioned races.

Other than that, the game will offer a great amount of freedom in terms of character customization – you change the color of a character’s hair, skin and eyes. Finally, you can choose a character’s voice as well (or choose to not use voices at all) – there’s a fairly extensive list of voice actors to choose from, including big names such as Akira Ishida and Yui Horie. . It seems unlikely that these would be included in an eventual international release, but you never know.

Etrian Odyssey V, which Atlus has been very quiet on, is apparently now scheduled for release on August 4th in Japan, with more information on the game coming in an upcoming issue of Famitsu. The preview also confirms that the game will release on 3DS.

Coverage surrounding Etrian Odyssey V has been a bit strange. While it was announced back in November 2014, Atlus didn’t say which platform the game would be on. We’ve also received relatively little news about the title since the original reveal.

Interestingly, Etrian Odyssey V has popped up on a new survey from Atlus. One question actually lists it as a 3DS title. Given the series’ history, that platform choice would definitely make sense.