Terraria Wii U and 3DS boxart 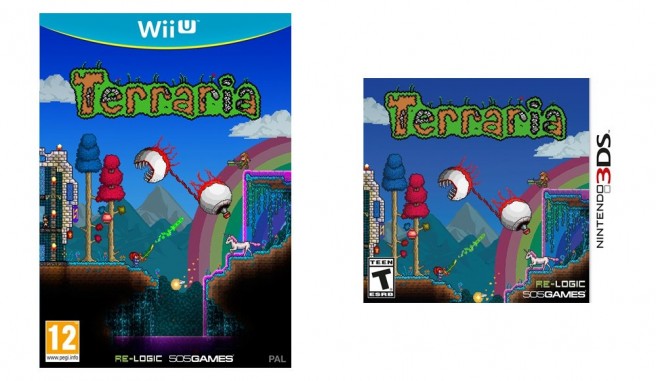 505 Games has shared the boxart for Terraria on Wii U and 3DS, which was officially confirmed for both platforms earlier today. Take a look at the packaging above.

Terraria heading to Wii U and 3DS in early 2016, playable at Gamescom

505 Games has finally made Terraria official for Wii U and 3DS. The title will be hitting both platforms in early 2016.

On 3DS, Terraria supports local multiplayer with up to 4 friends. The Wii U version features 8-player online multiplayer and 4-player split-screen using the Wii Remote. Both releases also make use of touchscreen controls.

Terraria will be making its playable debut on Nintendo platforms at Gamescom next week. Read on below for the announcement.

END_OF_DOCUMENT_TOKEN_TO_BE_REPLACED

Developer confirms Terraria for Wii U and 3DS

We finally have a confirmation that Terraria is in the works for Wii U and 3DS. Ratings for both versions have been listed on various retailers and ratings boards, but publisher 505 Games never made an official announcement. While that still hasn’t changed, developer Re-Logic stepped forward with a confirmation of their own.

“Terraria is indeed coming to Wii U and 3DS,” lead developer Whitney Baird noted on the game’s forum.

We don’t have any information beyond this, but at least we can finally say that Terraria is bound for both of Nintendo’s platforms. I imagine we’ll be hearing more soon enough!

Terraria was first presumed to be coming to Wii U and 3DS after listings popped up on GameFly and Amazon. Then in April, both versions were rated in Germany. Now we can add another piece of evidence to the pile, as the Wii U version has been rated by PEGI (no 3DS version yet for whatever reason).

It’s pretty bizarre that we first heard about Terraria for Wii U and 3DS around half a year ago, yet 505 Games still hasn’t made an announcement. If we don’t hear anything at E3, I’d be curious as to why the publisher is continuing on with radio silence.

Terraria for Wii U/3DS rated by the USK 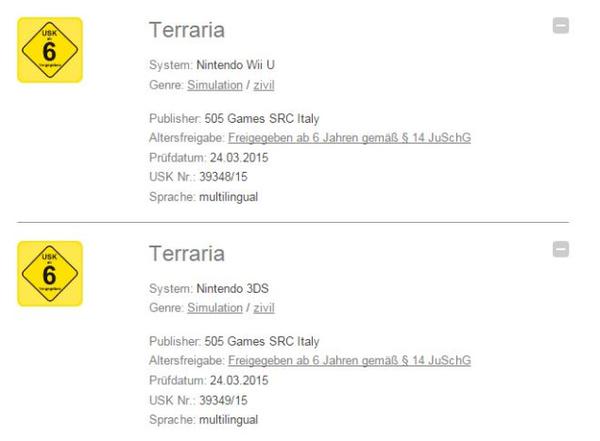 Terraria is pretty much a sure thing for Wii U and 3DS at this point. The game was listed by GameFly, and Nintendo versions appeared on Amazon soon after. Now we have yet another indication of Wii U and 3DS versions.

The USK – a ratings board in Germany – rated Terraria for both Wii U and 3DS. As expected, 505 Games is listed as the publisher.

There still has yet to be an official announcement for Terraria on Nintendo systems. It will happen soon, hopefully.

Thanks to Shinun for the tip.

Amazon now listing Terraria for Wii U and 3DS as well 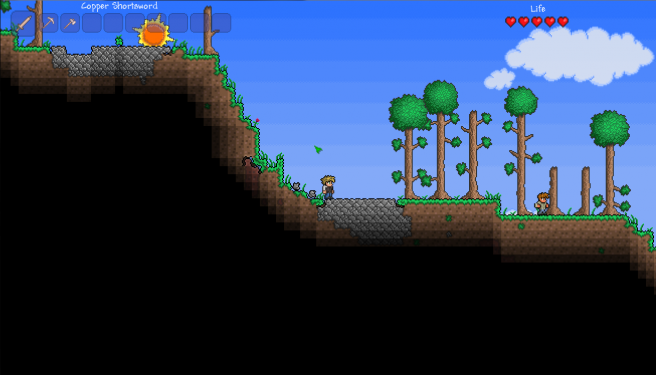 GameFly listed Terraria for Wii U and 3DS earlier this week. At the time, we couldn’t be sure if those listings were legitimate or innocuous errors. But thanks to new findings at a different retailer, it seems quite possible that 505 Games is indeed bringing Terraria to both of Nintendo’s platforms.

Terraria popped up for both Wii U

on Amazon today. A $29.99 price point is listed, along with a tentative October 31 launch date.

There is one strange thing about this situation: GameFly has since pulled its Wii U and 3DS Terraria listings. GameFly tends to be reliable more often than not, so I’m wondering if that was done simply because 505 Games hasn’t made an announcement yet. Either way, we’ll try to get an official answer from the company.

GameFly lists Terraria for Wii U and 3DS

505 Games appears to be bringing Terraria to Nintendo platforms, based on GameFly listings. The retailer has Terraria listed for both Wii U and 3DS.

GameFly lists an October 31 release date for both versions. However, this is likely a placeholder.

Terraria was once thought to be out of the question for Wii U and 3DS. I wonder what changed!

Posted on 8 years ago by Kirara Koneko(@KiraraKoneko) in 3DS eShop, News | 0 comments

Dutch based Engine Software (you might recognize them from Terraria) has just announced their latest endeavor will be a collaboration with Norwegian developer Monkeybin. The collaboration will bring their  highly popular social board game to the 3DS eshop.

The remake will be consistent with its original versions released for iOS, Android, and Facebook but with an added single player mode to better take advantage of being released on a dedicated handheld.
The 3DS version will also allow players to challenge their friends, strangers, and the game’s Bot “ADAMA” for more challenging gameplay.

Development is currently underway and Engine Software expects to be able to release information about price and release date soon.

505 Games rules out Terraria for Wii U

Terrarria won’t be coming to Wii U, according to 505 Games.

The publisher ruled out any potential plans to bring the title to Nintendo’s console on its official forums. 505 Games said, “there are other factors at play that prevent it from happening and we don’t expect that to change any time soon unfortunately.”

The company’s full comments are as follows:

We do not have any plans to bring Terraria to Wii U and it is not in development. Sorry. While the control mechanism may be nicely translated (agreed on that end), there are other factors at play that prevent it from happening and we don’t expect that to change any time soon unfortunately.

Sadly, Terraria won’t be making its way to the 3DS. Even though there’s significant interest on the part of creator Andrew Spinks, “the system unfortunately cannot run Terraria the way it needs to be ran.”

In an interview with RPS, Spinks said:

“I am wanting to code Terraria 2 in a more portable language so it can be released on multiple platforms at launch or close to launch. 3DS is something I was very interested in getting Terraria on but the system unfortunately cannot run Terraria the way it needs to be ran.”

Based on Spinks’ comments, perhaps Terraria 2 is something that could be more likely for the 3DS. If the game is being coded so that it’s more portable-friendly, then I don’t see why Nintendo’s handheld would be left out of the mix once again. But hey, I’m not a coder, nor am I making the game!