Posted on 5 years ago by Brian(@NE_Brian) in General Nintendo, Rumors | 11 Comments

Update: (3/11/15) It’s not a mobile game as many had expected, but it isn’t for a Nintendo platform. The game is “Tembo The Badass Elephant” – read about it here. 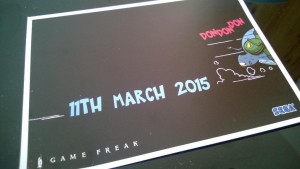 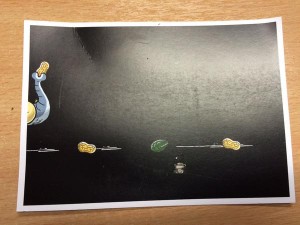 The postcard above, coming from Game Freak and SEGA, was sent out to certain folks today. It seems to be teasing a potential collaboration between the two companies. I have no idea what this is about – and there’s a possibility that this has nothing to do with Nintendo – but I figured this was worth sharing!

Posted on 5 years ago by Kirara Koneko(@KiraraKoneko) in 3DS, News | 1 Comment

The Pokémon Omega Ruby and Pokémon Alpha Sapphire Eon Ticket can be claimed via StreetPass, attend the special launch event and be one of the first to get your special EON Ticket.

With the Eon Ticket you’ll have the opportunity to catch one of the Legendary Eon Pokémon, Latias or Latios.

The Pokemon Company will also be sending 15 people from 15 cities across the UK to the special event to help spread the Eon Ticket far and wide as most will have to wait to get the ticket from someone who has already recieved it.

Ishihara wants the Pokemon games to be enhanced with latest tech, communication is key

Posted on 5 years ago by Brian(@NE_Brian) in General Nintendo, News | 23 Comments

This week’s issue of Famitsu contains an interview with Pokemon president Tsunekazu Ishihara. Ishihara discussed Pokemon Omega Ruby/Alpha Sapphire and a few other topics, but the most interesting comments came about when he talked about the future of Game Freak’s titles.

Famitsu first inquires about Pokemon as a whole. When asked about the current situation and views of the future from his perspective, Ishihara teased:
END_OF_DOCUMENT_TOKEN_TO_BE_REPLACED

Posted on 5 years ago by Brian(@NE_Brian) in General Nintendo, News | 15 Comments

Game Freak’s Solitiba getting a soundtrack release in Japan

Game Freak’s Solitiba (also known as Soritia Horse) is getting a soundtrack in Japan. It was announced on the company’s blog today that the item will be released next month for 2,500 yen.

The soundtrack contains 30 tracks, 25 of which are from the game. Another 5 are bonus tracks including Karaoke and character voices. Also included are QR codes and series codes for the 3DS and iOS versions.

Nintendo hasn’t published any new Pokemon Stadium games since 2007. By the sound of things, the series won’t be returning anytime soon.

Speaking with USgamer, Game Freak’s Junichi Masuda said that simply improving the graphics wouldn’t be “as impactful or impressive” since Pokemon games are in 3D these days. A new Pokemon Stadium would instead need “some sort of new invention” for its existence to be justified.

Below are Masuda’s full comments:

“It kind of goes back to the core philosophy of Pokémon as a brand: We really want to excite people and surprise them with new things they weren’t expecting. The original games, of course, were 2D and in black and white, and seeing them in 3D was a stark contrast… it was kind of a huge surprise for players. Nowadays, the Pokémon are already in 3D, and I’m not sure that better graphics would be quite as impactful or impressive. So in order to come back to the Stadium series, I think we’d need to have some sort of new invention to justify it.”

The Wii U and 3DS will both be receiving Amiibo support in the future. What might the functionality mean for a franchise like Pokemon?

While Game Freak’s Junichi Masuda won’t share any specifics regarding potential ideas, he did tell GameSpot that the company could be open to supporting Amiibo down the road. That will happen “if we can find some really cool way out to use Amiibo with NFC, and add some new type of gameplay,” Masuda said.

“You might be aware that Pokemon as a brand used NFC for Pokemon Rumble U for the Wii U. Not in the exact same way as that, but if we can find some really cool way out to use Amiibo with NFC, and add some new type of gameplay, then I think we’d definitely be supportive of using it in the future.”

Game Informer recently caught up with Pokemon Omega Ruby and Alpha Sapphire producer Junichi Masuda and director Shigeru Ohmori. The two were touched on slew of different topics, including the lack of Pokemon games on the 3DS Virtual Console, how Pokemon are chosen for Smash Bros. the possibility of revisiting the idea of extensions for previously-released titles, and more.

You’ll find a few excerpts from Game Informer’s interview below. Head on over here for the full discussion.