Posted on 5 years ago by Brian(@NE_Brian) in DS, News, Podcast Stories, Wii U | 7 Comments

One of the highlights from Nintendo’s investor briefing today was the confirmation of DS support for the Wii U Virtual Console. You can find out what president Satoru Iwata said about the functionality below.

END_OF_DOCUMENT_TOKEN_TO_BE_REPLACED

Iwata on the state of Wii U, issues communicating GamePad’s value

Posted on 5 years ago by Brian(@NE_Brian) in News, Podcast Stories, Wii U | 0 comments

Satoru Iwata’s comments on the state of Wii U coming from Nintendo’s investor briefing are now available. You can find them below.

As a platform in its second year, Wii U is currently in a very difficult position. I would like to begin with what we are going to do with Wii U.

Obviously, under the current situation where the company has to report an operating loss, simply executing a price reduction as a way to defuse the situation is not an option. In the short-term, Nintendo will focus on thoroughly enriching the value of the most significant feature of Wii U, the Wii U GamePad.

Unfortunately, as the current situation of Wii U shows, we have not been able to fully communicate the value of the GamePad. We also realize that we have not been successful in answering consumers’ questions such as, “What is the difference between Wii U and the previous platform, Wii, and what is the benefit of upgrading it?” By looking at the current sales situation, I am aware that this is due to our lack of effort. What’s even worse is that there even appear to be not a small number of consumers who think the GamePad is one of the accessories for the previous platform, Wii.
It is more challenging to convey the appeal of the GamePad to consumers who do not engage with video games that often since they do not actively gather information about video games. Therefore, we intend to take on this challenge, and I would like to have this solved before the year-end sales season.

In order to do this, it is obvious that

Our top priority task this year is to offer software titles that are made possible because of the GamePad.

We have managed to offer several of such software titles for occasions when many people gather in one place to play, but we have not been able to offer a decisive software title that enriches the user’s gameplay experience when playing alone with the GamePad. This will be one of the top priorities of Mr. Miyamoto’s software development department this year.

Posted on 5 years ago by Brian(@NE_Brian) in DS, News, Podcast Stories, Wii U eShop | 15 Comments 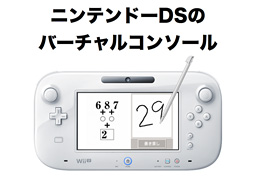 The Wii U Virtual Console will be receiving DS support, Nintendo has confirmed.

Nintendo hasn’t shared concrete details, but the company suggested during its investor briefing today that the GamePad will split the game action in half – at least based on the image above.

Nintendo’s latest investor briefing is about to begin. And, per usual, analyst David Gibson is tweeting live from the event. We’re rounding up all of the bits shared at the conference below.

Posted on 5 years ago by Brian(@NE_Brian) in 3DS, News, Podcast Stories, Wii U | 4 Comments

Bits from Satoru Iwata’s press conference in Japan continue to emerge. Nikkei has a few more quotes about 3DS and Wii U sales, which are as follows:

In the american video game market a high share of the portable console 3DS is ensured, but during the Christmas shopping season last year sales weren’t explosive as expected. With the delay of software releases for the home console Wii U, it can’t recover while momentum is lost. While it’s necessary to rebuild another dimension, we don’t think that we can overcome this situation by applying a large price cut.

Earlier today we heard Iwata stating that a Wii U price cut is unlikely. The comments above specifically mention “a large price cut”, but perhaps something smaller is still a possibility?

Posted on 5 years ago by Brian(@NE_Brian) in General Nintendo, News, Podcast Stories, Wii U | 17 Comments

Of Nintendo’s buyback initiative, Iwata said that Hiroshi Yamauchi’s heirs will have to pay inheritance taxes and may need to sell shares. He also remarked:

“That won’t merit shareholders, that’s why we decided on the buyback. But that’s not all the reason. We’ve been rewarding our shareholders mainly through high dividends, but we cannot generate as much profit as we used to make.”

END_OF_DOCUMENT_TOKEN_TO_BE_REPLACED

Posted on 5 years ago by Brian(@NE_Brian) in News, Podcast Stories | 5 Comments

As part of its latest financial results released today, Nintendo has announced plans to acquire its own shares.

Through the acquisition, Nintendo hopes to “improve capital efficiency as a flexible capital policy in accordance with changes in the business environment.”

Posted on 5 years ago by Brian(@NE_Brian) in General Nintendo, News, Podcast Stories | 11 Comments

Back in July 2011, Nintendo president Satoru Iwata announced that he would be taking a 50 percent pay cut following poor 3DS sales. With the Wii U now facing a similar situation, Iwata is making a similar move.

Iwata will once again take a 50 percent pay cut, it’s been confirmed as part of Nintendo’s most recent financial results. Japanese publication Nikkei reports that his salary will be reduced from the period of February until June.

Nintendo’s two other representative directors, Genyo Takeda and Shigeru Miyamoto, will be taking a 30 percent cut as well. All other board directors, including Tatsumi Kimishima, Kaoru Takemura, Shigeyuki Takahashi, Satoshi Yamato, Susumu Tanaka, Shinya Takahashi, and Hirokazu Shinshi, will take a 20 percent reduction.

According to Iwata, Nintendo will evaluate future salaries based on the business environment at that time.

Posted on 5 years ago by Brian(@NE_Brian) in 3DS eShop, News, Podcast Stories, Wii U eShop | 2 Comments

With the Super Indie Connection Sale you can save 60% on selected independent games — but only until 13/02/2014 and only on Nintendo eShop for your Wii U!

The developers of the five participating games love each other’s games so much, they’re offering you their own game at 60% off the regular Nintendo eShop price if you have already downloaded any of the other four games on your Wii U!

If you haven’t downloaded any of the participating games yet, you can also buy one from Nintendo eShop on your Wii U during the Super Indie Connection Sale to be able to get the discount on the other games.

Posted on 5 years ago by Brian(@NE_Brian) in 3DS eShop, News, Podcast Stories | 1 Comment