Posted on 7 years ago by Brian(@NE_Brian) in General Nintendo, Mobile, News | 17 Comments 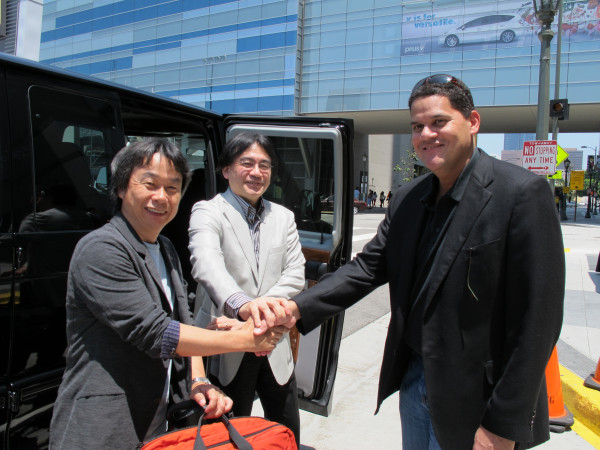 Posted on 7 years ago by Brian(@NE_Brian) in Mobile, News | 2 Comments 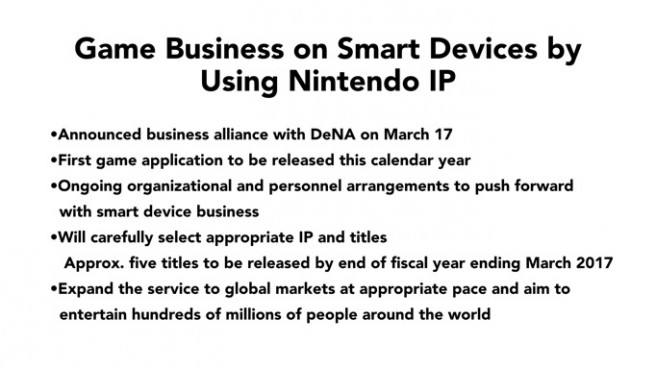 Nintendo looking to release 5 mobile titles by March 2017, first one reconfirmed for this year

Posted on 7 years ago by Brian(@NE_Brian) in Mobile, News | 4 Comments 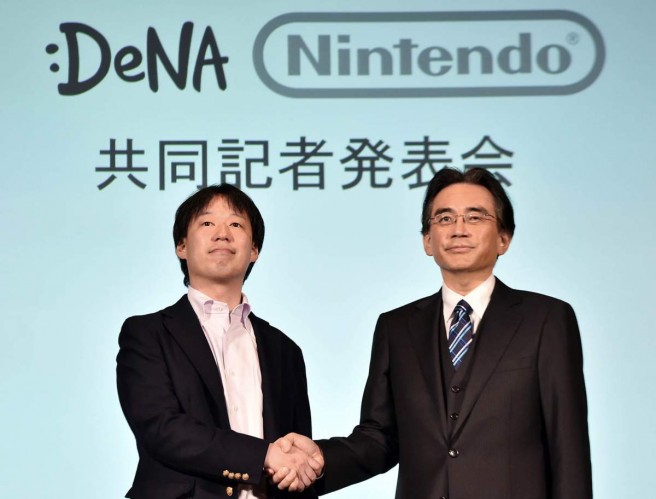 Posted on 7 years ago by Brian(@NE_Brian) in Mobile, News | 8 Comments

Reuters recently had the opportunity to speak with DeNA chief executive Isao Moriyasu. During the interview, Moriyasu stated that the company hopes to bring in over 3 billion yen ($25.02 million) a month from its new mobile partnership with Nintendo.

“We want to create games that will be played by hundreds of millions of people. We want to create multiple hit games rather than aiming to succeed with just one powerful IP element. We haven’t talked to Nintendo about targets, but at DeNA, our best-selling game brought in 3 billion yen a month, and we want to surpass that.”

There’s another interesting portion from Reuters’ report as well. The site claims – based on what analysts have said – that “Nintendo will likely earn around 70 percent” from its partnership with DeNA.

Posted on 7 years ago by Brian(@NE_Brian) in General Nintendo, Mobile, News, Switch | 1 Comment

Nintendo held a presentation with DeNA last week to announce a partnership between the two companies. Towards the end, Nintendo CEO Satoru Iwata and DeNA president Isao Moriyasu fielded questions from attendees. The entire Q&A is now live, and you can find it right here.

I won’t be breaking down the Q&A into various excerpts per usual, as we covered it quite a bit last week (in both video and summary form). There also isn’t a whole lot of information that we haven’t already covered. Still, it might be worth a read for some of you!

Posted on 7 years ago by Brian(@NE_Brian) in General Nintendo, Mobile, News | 1 Comment

Nintendo and DeNA held a presentation earlier this week to announce a big partnership between the two companies, as the Big N is finally set to make a big splash in the mobile space with original games for smart devices. Towards the end of the event, Nintendo president Satoru Iwata and DeNA CEO Isao Moriyasu fielded some questions from those in attendance.

Here’s a brief summary as to what was discussed:

– Iwata says “that each company will have to rely on their good strengths”
– The two discussed how Nintendo will make the games and DeNA will handle the back end
– Moriyasu added that Nintendo will make the games and DeNA will support them
– He also said that the role each company plays will vary by game depending on needs
– Iwata on why Nintendo decided to partner with DeNA: “The world of business is always changing. Therefore, Nintendo is always adjusting.”
– Moriyasu is positive that the mobile game business is only getting larger and larger
– He wondered how he could make business even bigger, and he believes partnering with Nintendo will do just that
– Iwata said that there is no relationship between DeNA and the Nintendo NX
– Again, Nintendo is not going to give up making games for dedicated Nintendo platforms
– Iwata said he is thinking about cross platform interaction between smart phones and dedicated Nintendo devices
– The systems will all connect somehow through Nintendo’s new membership program
– Iwata hinted at some interactivity between dedicated Nintendo consoles and smart phones
– Iwata said many mobile companies were “knocking on Nintendo’s door” and offered similar deals
– DeNA was chosen because the company had a “passion” to work with Nintendo that impressed Nintendo
– Iwata: “DeNA attacked Nintendo with a passion, so we were impressed by them.”

If you watched Nintendo and DeNA’s presentation earlier this week, then most of this should just be rehash. Nintendo will also be putting up an English transcript soon enough I’m sure, so hopefully you’ll be able to read the full Q&A in the near future.

Posted on 7 years ago by Brian(@NE_Brian) in General Nintendo, Mobile, News | 16 Comments

GamesIndustry has collected a bunch of quotes from various mobile developers, who have responded to this week’s news regarding Nintendo and DeNA’s partnership. The two companies will be working together to bring games to smart devices. You can find all of the comments rounded up below.

Kristian Segerstrale, COO, Super Evil Megacorp: “It’s great to see that more core game developers are taking mass market touch screens seriously as a primary gaming device. We’re all huge Nintendo fans and would love to see them do well on mobile! Having more AAA game developers enter the market is beneficial for both players and the industry as it raises the standards for quality. Nintendo has a huge opportunity to broaden their fan base, and also an enormous challenge in ensuring that their brand and in-game experience translates to mobile and tablets.”

Teemu Maki Patola, COO of Frogmind: “Nintendo has a lot of strong IPs that are likely to fit mobile gaming well. It also knows how to make good game design. And apparently has realised that strategically it needs to be involved in mobile gaming. DeNA has a lot of experience in making successful products on mobile and knows how to make well performing F2P games. It has a lot of data of analytics, F2P business intelligence etc. I think the partnership can save a few years of Nintendo’s time. This way Nintendo is not required to go through the F2P learning curve (in which it has been completely uninvolved) but can skip ahead relying on DeNA’s knowledge on the areas it lacks. To really work, the co-operation needs deep strategic partnership which they set with the ritual of buying each other’s stock making the success of the other a mutual interest for both.”