Posted on 5 years ago by Brian(@NE_Brian) in New Nintendo 3DS, News | 0 comments

Amazon Japan is giving out a special bonus with reservations of the Fire Emblem If New 3DS cover plates. By pre-ordering the accessory, consumers will be provided with an exclusive sticker set. You can take a look at the different stickers above.

kantopia has once again translated the latest Fire Emblem If scans from Famitsu. Hit the gallery below for the full set.

Last night, Nintendo uploaded a new Fire Emblem If introduction video to its YouTube channel. “shadowofchaos725” has now come up with a complete translation, which you can watch below. You can also view the new commercial with English subtitles.

Two new videos have come in for Fire Emblem If. An introduction, plus a commercial, can be seen below.

Latest Fire Emblem If details, including another set of new characters

This week’s Famitsu has yet another feature on Fire Emblem If. We’re introduced to more characters, along with details about some other aspects of the game.

Here’s what we know about thus far:

– Subordinate to Nohr’s Prince Marx
– Has a peculiar personality where she transforms into a violent alter-ego upon sensing danger on the battlefield
– Personal Skill [Killer Instinct]: if user KOs an enemy with their attack, Strength, Magic, Skill and Speed +4 for one turn

– Likes girls and has a habit of spending his free days picking up women
– Good at dancing and can use it as a special command
– Personal Skill [???]: When used as a command, Strength and Speed +1 to all allies within a 2 tile radius (for one turn)

– A sorcerer who performs daily research into “amazing special moves”
– Easily fired up and in danger of losing control of his power
– Personal Skill [Blood Boil]: When equipped with a forged weapon whose name is written with 8 kanji, critical rate +10.

– Lazward and Odin are “homages” to Inigo and Owain, who are again children characters from Awakening

– When Orochi or Zero use their “capture” command to defeat an enemy, that enemy will be sent to the prison
– Captured enemies can then be recruited to your army by successfully scouting them with resources or by persuading them
– Certain enemies like bosses cannot be captured

Famitsu has also shared the following portrait of Zero: 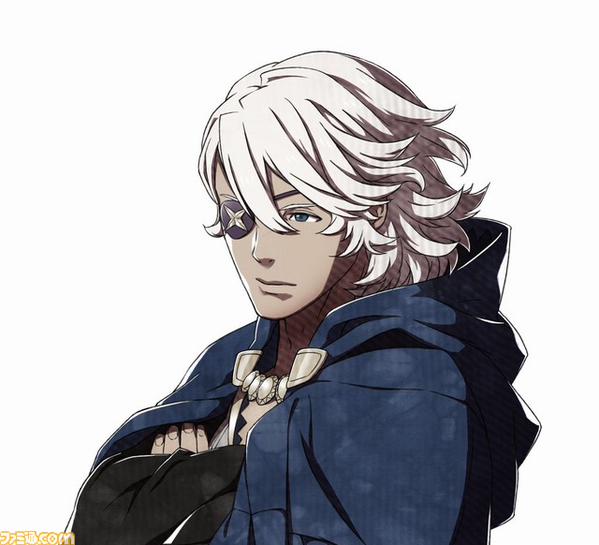 Three new Fire Emblem If screenshots have been discovered on the game’s Japanese 3DS eShop page. In the first two images, we see the Avatar and Kazahana teaming up to defeat a Nohrian Dark Mage. The third has an Inigo lookalike teaming up with what seems to be a female Cavalier in order to tackle a Ninja.

View the three screenshots in the gallery below (along with what it looks like on the 3DS home menu). Above, you can see the Fire Emblem If pre-paid eShop card.

Posted on 5 years ago by Kirara Koneko(@KiraraKoneko) in Images, New Nintendo 3DS | 7 Comments

The much anticipated next game in the Fire Emblem series launches in Japan on June 25 . Fire Emblem if will come with a Special Edition, which the boxart and packaging can be seen in the image above.

kantopia has once again translated the latest Fire Emblem If scans from Famitsu. Hit the gallery below for the full set.

This week’s issue of Famitsu is revealing a new round of characters in Fire Emblem If. You can get a look at them above, and details about each is posted below. Expect more information about the game over the next few days.

– Fox spirit youth
– Lives in a remote region of Hoshido
– Following his father’s footsteps, he acts as his clan’s leader and keeps his people in order
– Personal Skill [Gratitude]: When an unit uses a healing staff on the user, that unit has their HP restored by half the same amount

– One of the best samurai in Hoshido
– She is princess Sakura’s loyal subordinate and serves as her personal guard
– Personal Skill [???] When user’s attack KOs the enemy, all adjacent enemies have their HP reduced by 20% of their max HP

– Fights astride a pegasus
– His conduct suggests he’s a shallow man, but he’s actually very demanding on himself
– Personal Skill [Perfectionist] When HP is full, Hit rate and Avoid +15

– Soldier who reports to Nohr’s princess Camilla
– She is a favourite of Camilla who has a liking for “powerful girls”.
– Personal Skill [Ambush Duty] When the user attacks an enemy who cannot counter-attack, damage increases by 4

– Camilla’s subordinate, alongside Belka
– Hates to lose and isn’t satisfied until she’s the best at everything
– Personal Skill [Competitive] When user is the rear unit, if the front unit triggers a critical hit, the user is guaranteed a critical hit (if their attack connects)
– Voiced by Saori Seto, who also voiced Severa

– Despite her youthful appearance, she has an incredibly grown up personality
– Lives a quiet life in Nohr
– Personal Skill [???] When the user sustains damage from an enemy’s magic spell, the enemy also receives half of the same damage

The official Japanese Fire Emblem if website was recently updated after the Nintendo Direct last Sunday. You can find an English translation of the “System” page over on Kantopia . It’s mostly general information about the game that doesn’t offer many new infos to Fire Emblem veterans and those who have been keeping up to date with Fire Emblem if news, however there are two interesting new tidbits: Phoenix Mode, which revives fallen character each turn, can only be selected on Normal difficulty.