XSEED is back with the introduction of one lsat bachelorette in Story of Seasons: Trio of Towns. Today, we hear about Siluka, one of the Lulukoko twins.

Check out Siluka’s introduction below. Learn about previous bachelorettes here.

A new Story of Seasons: Trio of Towns trailer has come online showing the different bachelorettes featured in the game. We’ve included it below.

XSEED is back with the introduction of another bachelorette in Story of Seasons: Trio of Towns. Today, we hear about Iluka, the elder of the famous Lulukoko twins.

Check out Iluka’s introduction below. Learn about previous bachelorettes here.

XSEED is back with the introduction of another bachelorette in Story of Seasons: Trio of Towns. Today, we hear about Tsuyukusa teahouse waitress Komari.

Check out Komari’s introduction below. Previews overviews are located here.

Posted on 3 years ago by Fernando in 3DS, News | 0 comments

XSEED Games have published on their Facebook account the introduction of another bachelorette that will be a marriage possibility in the coming Story of Seasons: Trio of Towns.

This time the bacholerette is Kasumi, the refined teacher from Tsuyukusa Town. Check out her introduction below:

Greetings. It is a pleasure to make your acquaintance. My name is Kasumi.
…
…
Excuse me. I am not much for “small talk.”
Introduce myself? Very well.
I teach basic learning, such as reading and writing, to children at a nearby schoolhouse. However, my place of birth is far from Tsuyukusa. My father is a scholar, and I received a classical education from a governess. This included ancient literature and poetry—of which I am fond—as well as painting and martial arts.
I am not…accustomed to holding conversations with the opposite sex. I much prefer female company or even solitude, and I typically spend my time off working on my calligraphy or practicing with the naginata and the bow. These activities encourage reflection, mindfulness, and self-discipline. Talking with men encourages nothing of the sort.
I do not much care for sweets and will usually pass any I receive along to Komari or Yuzuki, who are more than happy to oblige me by receiving them. Other than desserts, I enjoy many of Tsuyukusa’s traditional dishes. I am rather fond of living here, even though I am separated from my mother and father. It is a peaceful town full of friendly people.
Now, if you will excuse me, I must be going.

Story of Seasons: Trio of Towns will launch February 28th in North America.

Story of Seasons: Trio of Towns — Meet the first bachelorette

Posted on 3 years ago by Fernando in 3DS, News | 0 comments

Three weeks from now XSEED will bring Story of Seasons: Trio of Towns to North America. We’ve been covering all the localization blogs that give us a better understanding of the work behind the title, but now it’s time for something different.

The XSEED devs have decided to let the marriage candidates from the game introduce themselves in order for us to know them better. They have published the introduction of Lisette, the florist from Westown, on their Facebook page along with some new images from Story of Seasons: Trio of Towns. Check it out below:

Howdy! You must be new around here. Call me Lisette! I’m pleased to meetcha.
I run the flower shop in Westown. I took it over from my parents a few years ago after gettin’ a degree in horticulture in the city. I just love it here in town; everyone is so sweet and helpful. Carrie and Miranda are like big sisters, and Wayne and Ford are a hoot.
What kinda things do I like? Gosh… Well, I like flowers. Duh, right? Nothing makes me happier than makin’ an original bouquet for a customer.
An’ what’s more, fresh flowers don’t just brighten up a room, they have special meanings. Even the same type of flower can have different meanings dependin’ on what shade it takes, so I’m always careful about how I compose a bouquet. Wouldn’t want someone else fluent in flowers gettin’ the wrong idea from a present, you know? The language of flowers even covers fruits and vegetables. For example, the apple flower represents…
Oh, gosh! I’m sorry for ramblin’ on like that.
I also love reading. What kind of books? Umm… I definitely like books that adults should be reading! Not storybooks or anything childish!
My dislikes? Well… I’m perfectly fine with most bugs since I work with plants all day, but there’s somethin’ about snails. The same kinda goes for food too—I can’t stomach anythin’ slimy.
Anyway, come by my shop sometime if you need flower seeds. Don’t be a stranger!

Story of Seasons: Trio of Towns will launch February 28th in North America.

XSEED trying to decide what to do about Story of Seasons: Trio of Towns’ DLC in the west

XSEED has found itself in a bind with Story of Seasons: Trio of Towns’ downloadable content. The new content could either be sold as paid DLC, or abandoned entirely.

“The total size of the DLC is over 200,000 Japanese characters, making it as large as some games we’ve released. The first Corpse Party, for example, has about 210,000 characters.

The last round of DLC was released in Japan in mid-December, which means that the Japanese text was completed after we’d entered the QA and submission phase of localizing the main game. With DLC of this size, including it in the game would have been impossible under our schedule. It would have forced us to release months after we’d originally planned.

END_OF_DOCUMENT_TOKEN_TO_BE_REPLACED

Senran Kagura Burst could have ended up with a very different boxart for Europe. Originally, PQube was toying around with an idea that “would have featured Hikage, and would have had a plastic sleeve around the box that would slide off. Hikage’s out clothing would have been on the sleeve only, so that peeling off the sleeve would mimic Senran Kagura‘s well-known clothing destruction feature.”

The image below is what PQube went with for the final product. While the initial idea was abandoned, head of marketing Geraint Evans says it could be revisited at some point. 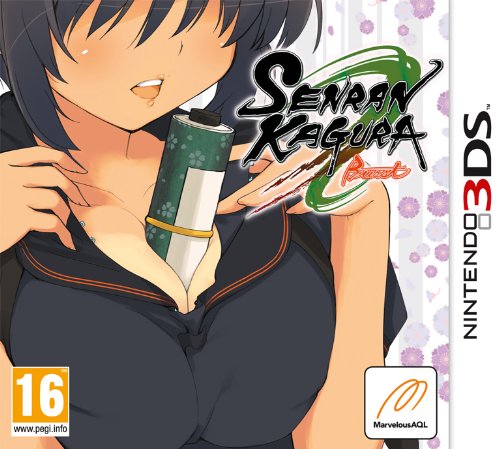 XSEED’s third Story of Seasons: Trio of Towns localization blog is now available. The latest post covers the many cats and dogs that can be had in the game.

On the topic of pets, some of you have been asking if Story of Seasons: Trio of Towns will keep the Hamtaro collaboration pet in the west. Unfortunately, the answer is no. XSEED did what it could to include Hamtaro, but it just wasn’t possible.

One question I keep seeing on forums, Facebook posts, and Twitter is, “Will Hamtaro be in the game?” For those of you who hadn’t heard, the cute hamster character is featured as a pet in the Japanese version of Story of Seasons: Trio of Towns, complete with a little voice clip.

Sadly, Hamtaro will not be in the North American release of the game. I can’t get into the specifics of why—the reason is more complicated than the usual licensing fee problems you might expect—but I will say that you’ll be hard-pressed to find new, official Hamtaro merchandise on sale in this part of the world. While many remember the character from his TV debut over a decade ago, Hamtaro doesn’t really have an official presence in North America anymore.

It goes without saying that we were gutted by this development and tried to keep Hamtaro in. We hate releasing a game that doesn’t have all the features of the original version, but in this case our hands were tied. For those of you who were looking forward to raising Hamtaro, I’m very sorry. But even without the little guy, there are still more varieties of pet to raise than ever before. We hope you enjoy all the different ways animals play a part in the world of Story of Seasons: Trio of Towns.

XSEED’s latest Story of Seasons: Trio of Towns blog can be read in full

The second Story of Seasons: Trio of Towns localization blog is now up on XSEED’s Tumblr. You can read it in full here. It contains talk about gameplay features as well as actually translating the title into English.

Some new screenshots from the localized build are also now available. Find those in the gallery below.