Ace Attorney creator on making the characters, music, and more

We’ve translated the last portion of Famitsu’s interviews with Ace Attorney creator Shu Takumi. This time around, Takumi delves into the different characters, such as how he came up with Godot. He touches on other topics as well such as the iconic music.

You can read our full translation below. However, if you haven’t played the series before, you may want to skip this for now. You can also read our previous translations with Takumi here and here.

END_OF_DOCUMENT_TOKEN_TO_BE_REPLACED

Ace Attorney creator on putting the series on new platforms, reflects on the original games

Earlier today, Capcom put up a new blog post straight from Ace Attorney creator Shu Takumi. Takumi discussed bringing the series to new platforms (including Switch) and reflected on those original games he worked on.

END_OF_DOCUMENT_TOKEN_TO_BE_REPLACED

Famitsu recently published interviews with Ace Attorney creator Shu Takumi in back-to-back issues. We have a translation of the first part ready now.

During the discussion, Takumi had quite a bit to say about the original game’s origins. He touched on the Japanese name, how it was initially targeted for the Game Boy Color, and more.

END_OF_DOCUMENT_TOKEN_TO_BE_REPLACED

Capcom published a new interview today on its blog all about Apollo Justice: Ace Attorney. After previously landing on DS many years ago, it’s now coming to 3DS this month. Series creator Shu Takumi was brought in to discuss the classic game.

In the interview, Takumi reflected on wanting to use the DS’ features (as well as its new power), how one aspect was inspired by Resident Evil, and coming up with the new characters like Apollo himself. You can read the full discussion below.

END_OF_DOCUMENT_TOKEN_TO_BE_REPLACED

Ace Attorney anime to run for half a year, second episode promo

The Ace Attorney anime finally debuted a few hours ago. Now the question is, how long will it run for?

A comment from Capcom’s Shu Takumi indicates that the Ace Attorney anime will be around for half a year. That probably means we can count on a little over 20 episodes.

Here’s a promo video for the second Ace Attorney anime episode by the way:

Today, Capcom opened an official website for the 15th anniversary of the Ace Attorney series. You can find it here.

The site comes with a special message from Ace Attorney managing direct Shu Takumi. That’s posted below, courtesy of Court-Records.

END_OF_DOCUMENT_TOKEN_TO_BE_REPLACED

Posted on 4 years ago by Matt(@OnePunchMaz) in 3DS, News | 3 Comments

There’s been lots of Ace Attorney-related news lately since the next mainline game was announced this week. However, the latest spin-off title, The Great Ace Attorney, is still trucking along in Japan. Today marks the release of its eighth and final round of DLC. The eighth issue of Randst Magazine contains the following:

The most interesting thing about it, however, is that it also includes this message from Shu Takumi, basically the creator of the whole Ace Attorney franchise: 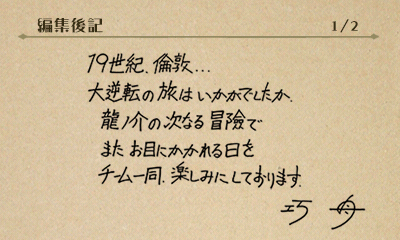 “London, at the turn of the 20th century…
I hope you enjoyed your great turnabout voyage.
The team is looking forward to the day we can meet you again in Ryuunosuke’s next adventure.”

(all credit to Court-Records for the translation)

Does this mean a sequel to The Great Ace Attorney is in the works? We don’t know for sure, but it’s definitely a possibility. Sadly, a Western release for a possible sequel seems pretty unlikely, given that Capcom seems to have no plans to localize the first one.

Capcom’s Shu Takumi wasn’t always up for the idea of Professor Layton vs. Phoenix Wright: Ace Attorney. As he explained to Game Informer, he “disliked the thought of using the Ace Attorney universe to do a simple crossover with another franchise.”

It was because of Level-5 CEO Akihiro Hino’s goal with the project that led Takumi to become more open to the idea. Hino hoped Takumi would be involved and “wanted to do more than just borrow the series’ title and some characters”.

I personally disliked the thought of using the Ace Attorney universe to do a simple crossover with another franchise. But Mr. Hino (Level 5’s president), who has always been a fan of Ace Attorney, had wanted to do more than just borrow the series’ title and some characters; his goal had been to have me on the project, and hearing that put me at ease and I gladly agreed to his proposal. I suggested the idea of having witch trials, and became the writer and director of the Ace Attorney parts of the game.

With this game, I was able to bring to life something I wouldn’t have been able to in the actual Ace Attorney series: trials that take place in a world where magic exists.

Takumi shares the keywords for The Great Ace Attorney, Sherlock Holmes was hidden in the game’s announcement trailer

Takumi started out with a tiny bit regarding the project’s origins:

“Actually, last year, when we began talks for a new Ace Attorney project within our company, the first thing that was brought up was having a ‘famous detective,’ which was how the plans began. However, to be honest, we were uncertain whether it would be possible to realize this at the time.”

Takumi additionally said that The Great Ace Attorney came from something he and his team had brainstormed in the past as something they wanted to work on in the future, but felt wouldn’t pan out. Some changes were made, and the keywords “ancestors,” “famous detective” and “attorney” became the focus.

Lastly, it seems that the existence of Sherlock Holmes in the game was actually teased in the announcement trailer back in April. His silhouette can be seen at the 0:50 mark in the video here. Since he couldn’t make it entirely obvious and simply show the character, the team decided to flip the silhouette upside down so that Sherlock couldn’t be easily seen.