The 3DS remake of Dragon Quest Monsters 2 will arrive in Japan on February 6, Square Enix announced today. Pricing is set at 5,490 yen.

Alongside the main release, a special bundle will be made available. It’ll include a copy of the game and a specially-designed 3DS XL system. This is priced at 24,390 yen.

New details have come in for Square Enix’s Dragon Quest Monsters 2 remake. You can find the latest information below.

– Three usual sizes for monsters: S, M, G
– “Super G” added for Dragon Quest Monsters 2
– Super G monsters are so big they take up all four slots on your team
– Includes monsters from Dragon Quest X such as the Queen Slime
– Can threaten monsters
– Spook a monster behind you by quickly turning around
– This startles some monsters enough to make them run away and drop an item
– Use crouching when a monster is chasing you
– Crouch the monster and it may just leave you alone
– This can be useful in avoiding battles
– Provoke out-of-reach monsters by whistling
– Can make nearby monsters dance
– Luca and Iru can jump
– Each of them has their own jumping motion
– Can fly later in the game
– Can also smash boulders to access other areas

Final Fantasy: The 4 Heroes of Light bosses coming to Bravely Default: For the Sequel 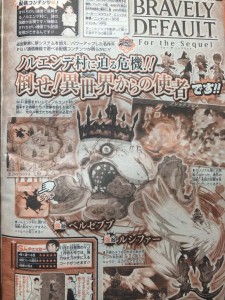 Bravely Default: For the Sequel will feature bosses from Square Enix’s older DS RPG, Final Fantasy: The 4 Heroes of Light.

According to the latest issue of Jump, Lucifer and Beelzebub are included as mega bosses. Players will need to touch a black dragon icon which appears on the lower mini-map screen in order to fight each.

As far as actually gaining access to Lucifer and Beelzebub, other players will need to pass them to you via Wi-Fi communications before the demons invade your realm. Some of the finer details are a bit unclear at present, but we should get a better idea of things by the time Bravely Default: For the Sequel launches.

Square Enix has prepared a new round of content detailing various aspects of the upcoming Dragon Quest X expansion. New screenshots and details are posted below.

– Mersandi village introduced
– Mersandi: one of the first destinations players will find in the new continent of Rendasia
– There are stories about a demon who seriously damaged the village in the past
– The demon was defeated by Zankrone, a brave hero
– Zankrone vanished soon after the battle
– Many villagers are now starting to disappear as well
– Gash: strong and reliable chief who continues to protect the village despite a leg injury
– Las: Gash’s son who wants to be like Zankrone
– Gope: his bad tempered mother who lives alone in a water will near the village due to a family quarrel
– Monster Master job: tamed monsters can use different skills to defeat enemies
– Pet monsters to increase their abilities temporarily
– Equip monster with armor and weapons

For the release of Bravely Default: For the Sequel, Square Enix is preparing a set of drama CDs known as “Reunion Festival”. Japanese fans will have access to an all-original script starting on December 25th, which is about “bringing the important people back together for a celebratory meeting”.

CD buyers will also receive a special download code for four costumes. These include a Dimensional Officer suit for Tiz, Bunny Bravo costume for Agnes, a Dukedom Civil Officer Apprentice outfit for Edea, and a rather odd piece of garb for Ringabel.

A look at unseen Tetsuya Nomura sketches from the 90s

Back when Final Fantasy V and VI were in development (you know, in the 90s), planner Takashi Aki was working with Tetsuya Nomura on the RPGs. Aki recently did some cleaning up around his residence and came across a few sketches that were previously unseen.

Square Enix open to another developer working on Final Fantasy, including Eidos

Square Enix tends to hold its Final Fantasy franchise close to the vest. The series hasn’t changed hands in the past, with Square Enix deciding to develop each new game internally.

Now here’s a crazy thought: how about an Eidos-made Final Fantasy? You may remember that Square Enix absorbed the company a few years ago, and is now a close partner as a result.

Interestingly, Square Enix has considered bringing in an outside developer to work on Final Fantasy – including Eidos. There have been discussions about the possibility, according to Yuji Abe. Abe said Square Enix would “think about” allowing an external team to take on Final Fantasy “if we find the right team of developers, the right people who really wanted to do it, and we had the right game”.

END_OF_DOCUMENT_TOKEN_TO_BE_REPLACED 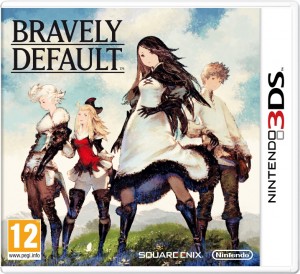