Splatoon’s final Splatfest, which pits Marie and Callie up against each other, isn’t too far off. Nintendo is gearing up for the big event in various ways: like with some printable alternative boxart, for example. We’ve attached both to this post, but they’re also located on the Splatoon Tumblr here. 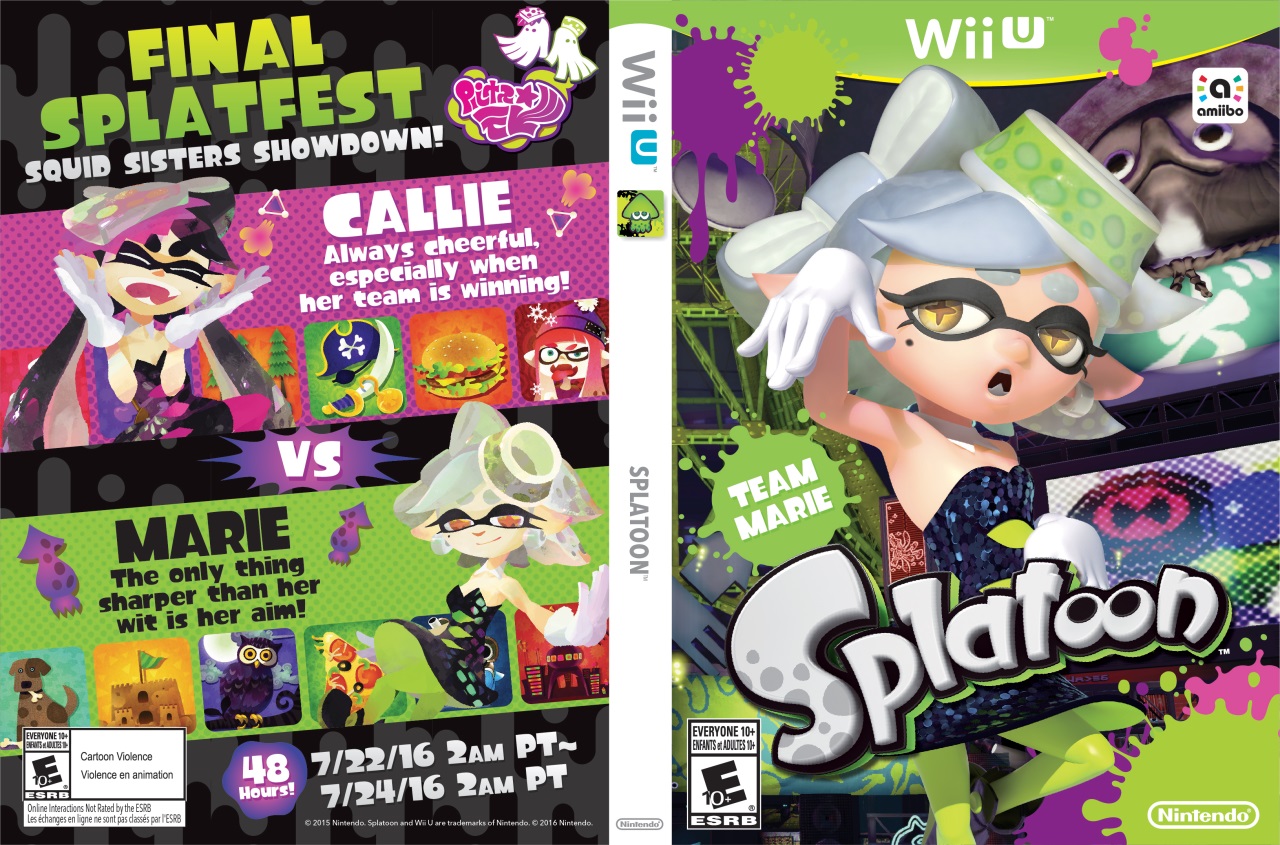 Media Create has offered some extra insight into this week’s Japanese sales.

As for Culdcept Revolt, we previously mentioned that it sold just over 29,000 copies. While it was the top seller in Japan, sales for the game are about half of the previous release. The last entry moved 55,000 copies in its first week back in 2012.

We’ve already posted an unboxing video for one of the Splatoon amiibo dioramas, which was the Squid Sisters stage. The video below takes a closer look at the second one: Kelp Dome.

Posted on 4 years ago by Brian(@NE_Brian) in General Nintendo, Videos, Wii U | 4 Comments

At Japan Expo 2016 last week, the Squid Sisters stopped by for a concert. View Callie and Marie’s full performance below.

When the new Splatoon amiibo made it to store shelves this past week in Japan, they were accompanied by an amiibo diorama for the Squid Sisters. Check out an unboxing video below, along with another look at Callie and Marie.

Nintendo has announced “The Summer of Splat” – a new celebration for Splatoon in the UK.

The Summer of Splat is intended to bring kids and squids together over the course of four weekends to partake in The Great British Splat-Off. These online tournaments will allow players to “show off their style, seek to cover the most territory and ultimately prove what they are made of.”

Three different leagues will be online (sign ups here), all of which requires teams of four:

END_OF_DOCUMENT_TOKEN_TO_BE_REPLACED

Posted on 4 years ago by Jake in News, Wii U | 3 Comments

Update: The patch has been completed and servers are back online. It is also confirmed to have fixed the invisible player glitch.

Another update to Splatoon, upgrading it to version 2.10.0, is happening right now. The patch is undoubtedly to resolve the invisible squid glitch that came in version 2.9.0. Until the patch is completed, servers will be offline, but we’ll update once patching is complete.

Here’s an overview of the level:

“Urgent report from the Squid Research Lab! The Squid Sisters have been spotted in the world of Super Mario Maker, and the local squids don’t seem to be giving them a very warm welcome! It’s up to Callie and Marie to show those Blooper bullies that the new squids on the block aren’t about to be messed with. May the freshest squid win!”

And here’s some footage:

Splatoon received a new update earlier this week. Perhaps as an unforeseen side effect, a significant glitch has been spotted by the community.

The glitch in question involves players becoming invisible, and they appear to be ascending to heaven on the kill cam. It happens after superjumping right before you hit water or an area out of bounds. You’ll be invisible to teammates as well as enemies starting with the superjump enemies, and your squid icon will be off the GamePad to teammates.

As for the kill cam, it’s shown in a certain way because you’re stuck in superjump animation to everyone else. Shots don’t do damage, but reports say that bombs are effective.

This video shows how chaotic things can become when both teams become invisible:

END_OF_DOCUMENT_TOKEN_TO_BE_REPLACED

Posted on 4 years ago by Brian(@NE_Brian) in Videos, Wii U | 3 Comments

By using the new Callie and Marie amiibo, Splatoon players can listen to a few Squid Sisters performances. You can check them out in the video below.