The new update for Retro City Rampage DX is due out next Tuesdayin North America, Vblank Entertainment has confirmed. European 3DS owners have had access to the patch as of yesterday.

If you haven’t heard about what’s new with the Retro City Rampage DX update, check out this post.

In a message posted to Vblank Entertainment’s website, the studio shared full details about what’s included in the new Retro City Rampage DX update. The patch is coming to Europe today, and North America soon.

Today’s news from Vblank isn’t entirely about Retro City Rampage. In the post, the company confirms that another 3DS title will be made, but additional information was not revealed.

END_OF_DOCUMENT_TOKEN_TO_BE_REPLACED

Retro City Rampage DX’s upcoming update has a release date for Europe. Vblank Entertainment confirmed on Twitter that the patch is arriving this Thursday.

As for North America, it’ll take a bit longer. Vblank is waiting for the update to finish certification.

The Retro City Rampage DX update was submitted to NOA and NOE simultaneously, but it's unfortunately still sitting in NOA certification.

As soon as Nintendo pushes it though North American certification and it gets an NA release date, I'll let everyone know!

Posted on 5 years ago by Kirara Koneko(@KiraraKoneko) in 3DS eShop, News | 0 comments

Here is a post from Miiverse giving us some more details about the upcoming Retro City Rampage DX update due out next month. 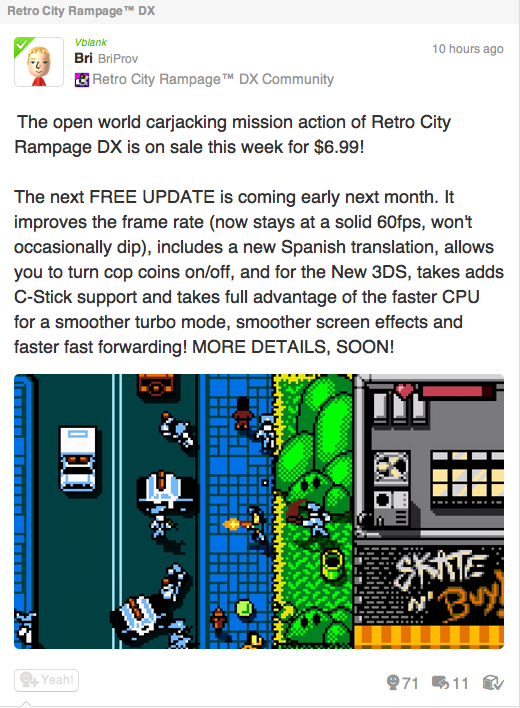 Vblank Entertainment shared another nugget about the upcoming update for Retro City Rampage: DX. The patch “significantly improves performance on the old 3DS” so that the game’s frame rate can be optimized. There’s no date yet for the update, but it may arrive before the New 3DS launches.

Update release date still unknown, but hoping it'll be out by the release of the "new" 3DS system, early next month.

Vblank Entertainment has further teased what the upcoming Retro City Rampage: DX update will offer for New 3DS owners. Thus far, it’s been confirmed that dual stick shooting will become possible with the c-stick. It sounds like a few other things are planned as well, but we’ve yet to hear any additional specifics.

Vblank Entertainment added a new post to its site today that examines the sales of Retro City Rampage.

While Wii makes up a tiny fraction of the game’s sales, the 3DS version appears to have done quite well. Vblank says this edition “has the healthiest tail of all platforms.” Retro City Rampage continues to move units on 3DS despite never having received a price drop.

Here are Vblank’s full comments about the title’s sales on 3DS:

Nintendo 3DS has the healthiest tail of all platforms. Released nearly 10 months ago, it has never been discounted and still boasts a strong weekly tail. It was a great fit for the platform and market and received great promotion from Nintendo at launch. RCR released on 3DS 15 months later, but had it been released simultaneously with the others it’s possible that it could be the best selling out of all eight platforms. Again, this would vary widely on the type of game, but RCR was a perfect match for 3DS.

Posted on 5 years ago by Brian(@NE_Brian) in News, Wii U eShop | 2 Comments

Retro City Rampage DX is out of the question for Wii U. However, that doesn’t mean Vblank Entertainment isn’t interested in Nintendo’s console.

Vblank confirmed on Twitter that the company has had a dev kit since 2012. Additionally, the developer “will definitely consider bringing future games to the platform”.

For those wondering: I bought a Wii U devkit in 2012 and will definitely consider bringing future games to the platform, just not RCR/DX.

Posted on 5 years ago by Brian(@NE_Brian) in News, Wii Shop Channel | 0 comments

The WiiWare version of Retro City Rampage will soon be updated with “DX” content. All missions have been tweaked, which extends to vehicles, weapons, challenges, visual effects, visual enhancements, checkpoints, difficulty, and challenges. Enhancements have been made to the core gameplay as well as smaller elements such as parking garages and waypoints.

Once the “DX” content is released, Retro City Rampage on WiiWare will be in line with the other versions of the game – mostly anyway. Only HD video filters and zoom modes will be missing. The Wii Remote, Classic Controller and GameCube Controller will all be supported, and there’s an optional “shake” gesture exclusive to the Wii Remote.

Retro City Rampage has also been rated in Australia in New Zealand, so the game should be out in these territories soon. Meanwhile, look forward to the “DX” update in other regions on November 13.