Old interview reveals why Wario and Waluigi don’t have girlfriends

Posted on 4 years ago by Tyler(@tylerlelliott) in General Nintendo, News | 37 Comments

Supper Mario Broth has posted a scan from a 2000 Nintendo Power interview with Hiroyuki Takahashi and Syugo Takahashi of Camelot. In it, the two developers discussed why Wario and Waluigi don’t have female partners like Mario and Luigi have Peach and Daisy in Mario Tennis.

The Takahashi brothers explained how they wanted Luigi to have his own partner similar to Mario and Peach. However, Shigeru Miyamoto ended up suggesting Daisy. They also wanted Wario and Waluigi to have girlfriends, but Miyamoto wasn’t interested.

Here’s the full excerpt of the Nintendo Power interview: 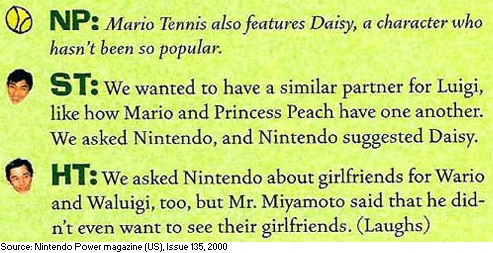 Posted on 6 years ago by Patrick(@Patricklous) in DS, Features, Game of the Month, GBA | 1 Comment

END_OF_DOCUMENT_TOKEN_TO_BE_REPLACED

New Wired Fight Pads for Wii U announced by PDP

Posted on 7 years ago by Kirara Koneko(@KiraraKoneko) in News, Wii U | 4 Comments

The leading third-party manufacturer of video game accessories to release a second wave of Nintendo GameCube-inspired controllers for Wii U in early 2015.

Burbank, CA – 12/3/2014 – PDP is proud to announce that four fan-favorite characters are joining the lineup for the Wired Fight Pad for Wii U, a new addition to the Classic Controller line inspired by the original Nintendo GameCube controller.
Unlocking with the second wave: Link, Samus, Donkey Kong, and Wario! Each of these characters brings a deep history and strong personality to the Wired Fight Pad.

The Wired Fight Pad line also features fan-favorite Nintendo characters such as Mario, Yoshi, Princess Peach, and Luigi – All with a shape inspired by the original Nintendo GameCube controller.

Check out the images below to see if you will be picking one up next year:

Posted on 7 years ago by Kirara Koneko(@KiraraKoneko) in 3DS, News, Screenshots | 4 Comments

Today marks the launch of Super Smash Bros. for 3DS and I think we are all in for a “smashing” good time.

In honor of this Nintendo has updated its website to include three new secret characters, Spoiler Alert!

Check out the screenshots below;

Posted on 7 years ago by Kirara Koneko(@KiraraKoneko) in Videos, Wii U | 0 comments