Game of the Month

Monolith Soft: From A to Xeno (Part 2)

Posted on 7 years ago by Patrick(@Patricklous) in DS, Features, Game of the Month, Wii | 8 Comments 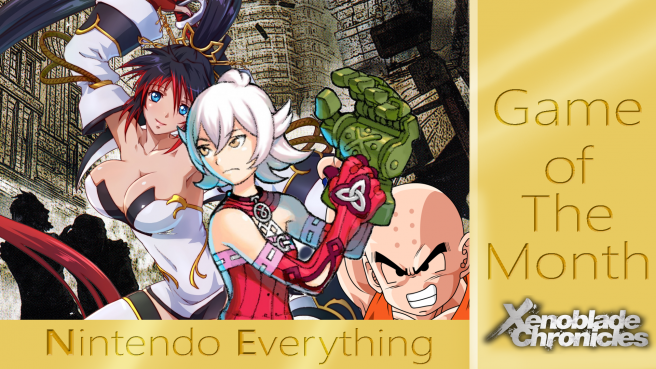 END_OF_DOCUMENT_TOKEN_TO_BE_REPLACED

[Feature] You Got Boost Power! Why Mario Kart 8 is no F-Zero

Posted on 7 years ago by Patrick(@Patricklous) in Features, Game of the Month, GameCube, Wii U, Wii U eShop | 10 Comments 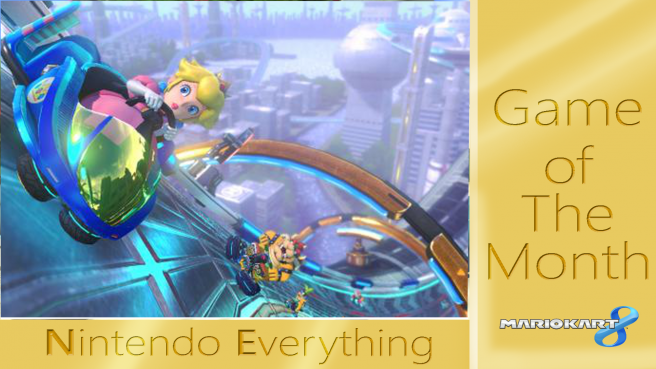 It’s safe to say that Mario Kart 8 takes more than a few cues from F-Zero. Nintendo’s other racing franchise that started out on the SNES gets comparatively little love nowadays, but several features from this series have worked their way into the latest Mario Kart. The new racetracks are the most obvious influence, with gravity-defying courses that are straight out of F-Zero (quite literally in the case of some of the DLC), but the new 200cc class brings Mario Kart’s speed just a little bit closer to its older brother. Heck, you can even play as a Mii approximation of Captain Falcon if you can track down his elusive amiibo. But for all the inspiration that Mario Kart 8 takes from F-Zero, the two series remain distinctly different. Some people are claiming that Mario Kart is now an adequate replacement for the currently MIA F-Zero (and by some people I mean just one guy on Neogaf), but taking a look at the design philosophy behind both titles shows that they’re completely at odds with each other.

END_OF_DOCUMENT_TOKEN_TO_BE_REPLACED

[Feature] The Importance of Cats: Why Palicoes add more to Monster Hunter 4 Ultimate than you’d think

Posted on 7 years ago by Kirara Koneko(@KiraraKoneko) in 3DS, Features | 2 Comments 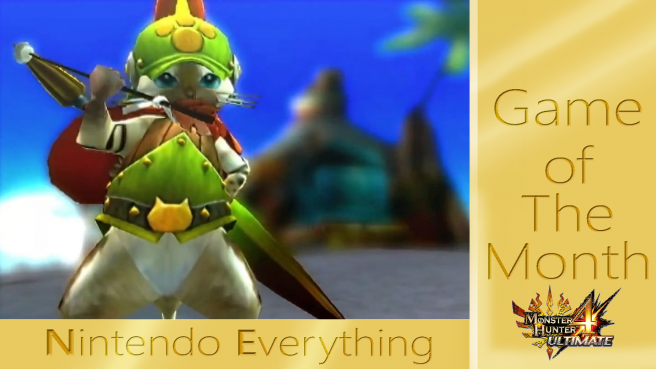 So let’s get down the to serious-and-yet-unserious side of Monster Hunter. Monster Hunter as a franchise has had a long history of games, starting in 2004 with the original entry, to a decade later with Monster Hunter 4 Ultimate. I have always been intrigued by the series and have enjoyed numerous forays into the wild to hunt many monsters, but I have generally felt that there was something missing. I always enjoyed the fact that the games have had an air of silly humor via some of their support characters, and that they have even given you various minions to help you along the way, but none of these bits of charm have made me smile as much as much as the Palicoes in the latest entry, Monster Hunter 4 Ultimate! Who knew that a furry little critter could make such a difference; could this be what this series has been missing?

Felyne’s – small, bipedal cat creatures – have various roles in Monster Hunter 4 Ultimate, but the bravest of them all are named “Palicoes”. These furry hunting companions will travel with you during solo quests, as well as with you and one other hunter and their chosen felyne warrior. You select and create your Palico at the beginning of the game right alongside your own character, choosing their color, markings, and even bestowing upon them a name. I took the latter very seriously as I thought long and hard about my felyne companion; I wanted every aspect of my choices to be just right. After probably way to much time and thought (I honestly think I spent more time on him then my own character), I made my decisions and my furry little friend and I set off on what would prove to be some wild adventures!

END_OF_DOCUMENT_TOKEN_TO_BE_REPLACED

Posted on 7 years ago by Austin(@NE_Austin) in Features, Game of the Month | 2 Comments 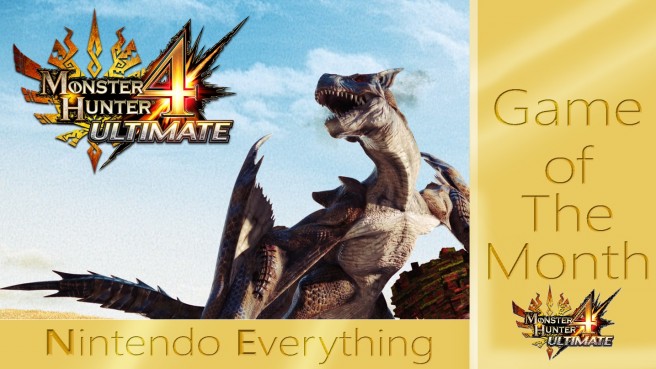 Ah, is it Monday again? Well alright, I can deal with that, but only because our game of the month this March is so wonderful. I bring you: Monster Hunter March! A whole month of features dedicated to talking about Capcom’s latest series entry, the series as a whole, and plenty more. You’re bound to learn something new about it over the next few weeks as our writers provide varying perspectives and observations about the game.

This month’s articles will include an in-depth comparison between Monster Hunter 4 Ultimate on 3DS and Monster Hunter Tri on Wii, a perspective on the game from “a super beginner”, a look at how Monster Hunter 4 creates fanaticism despite how intimidating and broken it can look from the outside, and an adorable exposé on your Palico sidekicks from the latest entry on 3DS. Look forward to all of it!

As usual, if you have an article you’d like to write about Monster Hunter this month, please use the contact form to send us an email with your idea and if we like we’ll get back to you. How can you not love this game? It’s the best.

Posted on 7 years ago by Austin(@NE_Austin) in Features, Game of the Month, Videos | 3 Comments 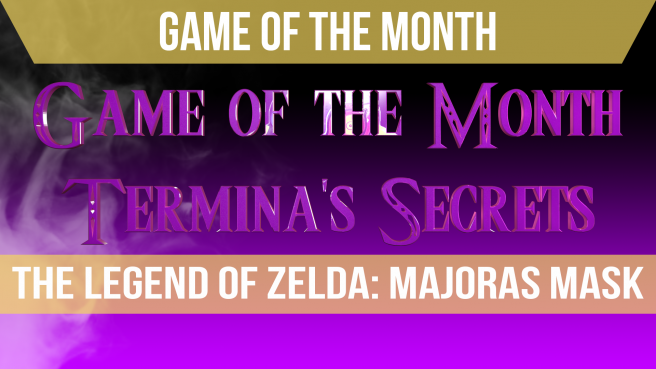 More: Game of the Month, highlight, The Legend of Zelda: Majora's Mask, video 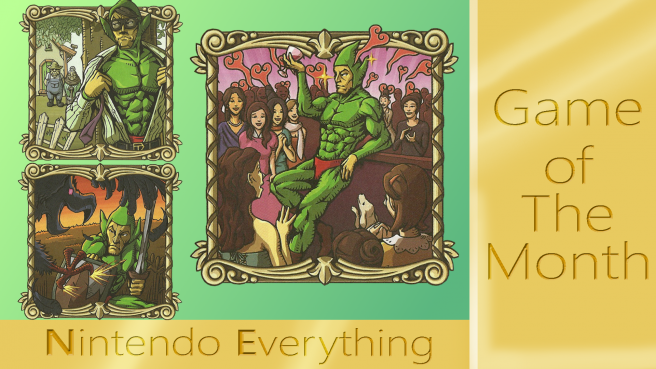 END_OF_DOCUMENT_TOKEN_TO_BE_REPLACED

GAME OF THE MONTH – The Legend of Zelda: Majora’s Mask

Posted on 7 years ago by Austin(@NE_Austin) in Features, Game of the Month | 0 comments 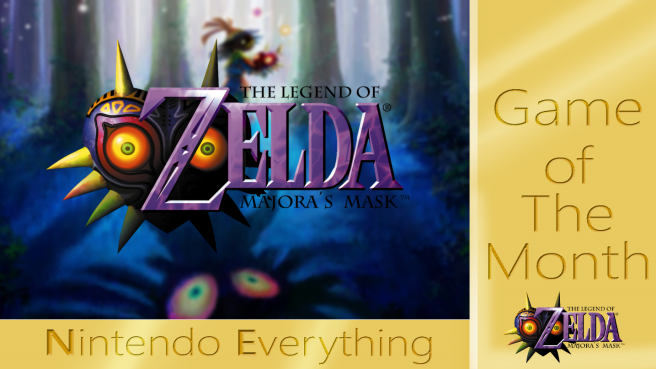 The clock has progressed beyond the point of midnight where I live, and as far as I’m concerned that means it’s The Legend of Zelda: Majora’s Mask 3D release day! We have a special way of celebrating game releases on NintendoEverything, and this month is no different. That’s right, February’s Game of the Month is going to be Majora’s Mask itself in all its oddities and wisdom and enjoyability and all of that other stuff. It’s an excellent game, and I hope you want to learn a lot about it that you didn’t know before; that’s what Game of the Month is for.

“More than you ever wanted to know about Tingle,” from Patrick on February 14th.
“Termina’s Landmarks,” from Scott on February 21st
“Untitled,” from Vincent on February 22nd
“Do we want more Zelda remakes? Will we get more?,” from Kira on February 28th

As usual, if you have an article you’d like to write about Majora’s Mask this month, please use the contact form to send us an email with your idea and if we like we’ll get back to you. How can you not love this game? It’s the best. Best Zelda game. Best game. Best thing. I love it. 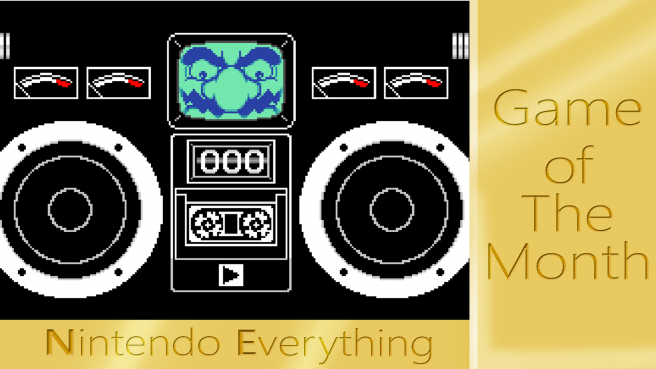 END_OF_DOCUMENT_TOKEN_TO_BE_REPLACED

[Feature] The Microgames of WarioWare’s Cast – A look at the style that creates Orbulon, Mona, and more

Posted on 8 years ago by Scott(@UnlikelyYuusha) in Features, Game of the Month | 2 Comments 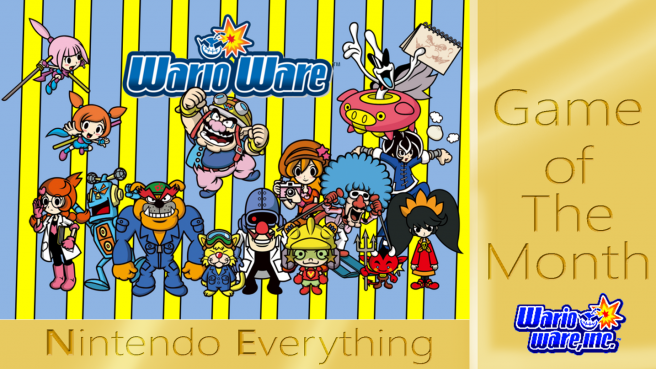 This week, Scott dives into our Game of the Month with a video about each character in the original WarioWare. Fascinatingly, he tries to pin down the style of each one and their microgames, which lead me to learn that Dr. Crygor’s are definitely my favorite. Nothing can beat that photorealism…

Here’s a question though: Which style of minigame suits you best, and which character’s games do you like the most? Did you ever really notice a difference in style between all the characters?

[Feature] Historical WarioWare: A Look Back on Wario’s Finest

Posted on 8 years ago by Vincent Ward in Features, Game of the Month | 3 Comments 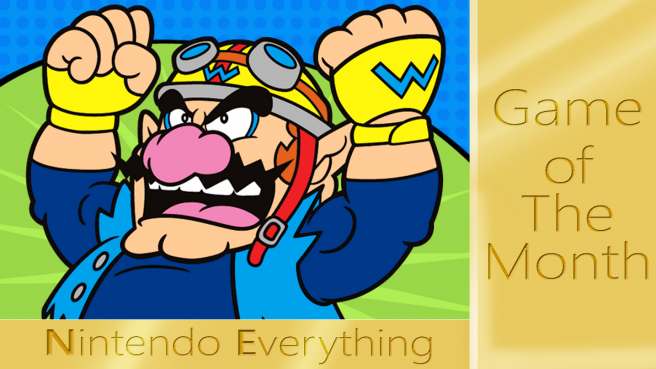 Mario was always the character who got to sit in the spotlight. Wanna go karting? Sure, but only if it’s called MARIO Kart. Wanna spend a day playing tennis? Of course you can, but it has to be called MARIO Tennis. Hell, even a social gathering has to be called a Mario Party. So after years of watching his childhood best friend get all the attention while he sat there doing nothing, it didn’t take too long before Wario started thinking of ways to get his own time to shine, and what better way is there to be the star of your own video game series than to have once with your name in it!? So let’s spend today reminiscing the history of Wario’s series, and see what made them so special.