END_OF_DOCUMENT_TOKEN_TO_BE_REPLACED

In celebration of Bayonetta 2’s second anniversary in Japan, PlatinumGames is sharing new tidbits about the game. Director Yusuke Hashimoto reveals on the studio’s website that Balder was originally intended to be playable in the main story.

Speaking of Balder, here’s a fun fact. When we first started planning Bayonetta 2, we thought about having him as a playable character in the main story. The idea was to split the story into two parts: as Bayonetta, players would fight against angels; as Balder, they’d fight against demons. Each of these parts would show the story unfolding from its main character’s point of view, until the very end when they converge and start working together. That itself might not be new information, though… It’s an idea from five years ago, after all, so I might’ve spilled the beans about it somewhere along the line.

Head on over to PlatinumGames’ site here for some “forbidden knowledge” about the game. It includes details about where to buy super-secret items and characters, where to stock up on Halos, and Tag Climax move lists for Rodin and Balder.

END_OF_DOCUMENT_TOKEN_TO_BE_REPLACED

Posted on 5 years ago by Brian(@NE_Brian) in General Nintendo, News, Wii U | 10 Comments

END_OF_DOCUMENT_TOKEN_TO_BE_REPLACED

During the discussion, Hashimoto reflected on the Nintendo content in Bayonetta 2 (spoilers?) and how Platinum ended up working on Star Fox Zero. He also spoke about working with Shigeru Miyamoto’s team and the challenge of making the game fun by using both the TV and the GamePad.

Head past the break for a rundown of Hashimoto’s comments. You can also read GameSpot’s full article here that has a few older quotes.

END_OF_DOCUMENT_TOKEN_TO_BE_REPLACED

First, here’s what Hashimoto said about working with two screens:

“Those two screens, you can’t find that anywhere else. When we were doing Bayonetta 2, we just used that screen as a touch pad. With Star Fox, Miyamoto originally had the idea that he wanted to create a shooting game that used both of these screens, and then we said, okay, how can we combine this with Star Fox? Just having to use those two screens makes things interesting.”

Hashimoto also discussed the importance of nailing a solid 60 frames per second. The game not only runs at this speed on the television, but also on the GamePad.

“We’ve got them both moving at 60 fps, which is big for a lot of people, I think. But I think that it’s kind of a milestone in gaming, in a way. It’s not something that we have done ourselves before at Platinum, and it’s just not even something that has been done in gaming before. So it’s a lot of new challenges.”

Finally, Hashimoto briefly touched on Star Fox Zero’s delay. The decision was made in order to give the game more of a “Platinum feel”.

“We want to make it feel as great as possible. It’s easy to say [it was delayed] to increase its quality, or whatever, but that entails a lot, whether it be visuals, or controls.”

Bayonetta 2 director on the Nintendo costumes, including a cut idea

Did you know that it’s Bayonetta 2’s first anniversary today? The game came out in Japan on September 20. Developer PlatinumGames celebrated with a special cake – see below. 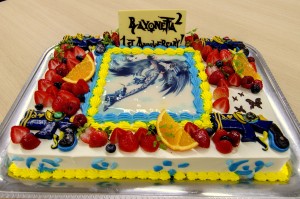 Bayonetta 2 director Yusuke Hashimoto also shared a message in an official PlatinumGames blog post. He spoke about the Nintendo costumes in the game, and also revealed a cut idea. He had wanted to include a costume based on Famicom Tantei Club, a game that Nintendo only brought to Japan. Unfortunately, it never made it into the final game.

You can read up on Hashimoto’s full message below.

END_OF_DOCUMENT_TOKEN_TO_BE_REPLACED

Posted on 6 years ago by Brian(@NE_Brian) in General Nintendo, News, Wii U | 39 Comments

In an interview with Wired, PlatinumGames’ Yusuke Hashimoto spoke about what it’s like working with Nintendo in creating Star Fox Zero. On a similar note, Nintendo’s Yugo Hayashi commented on how it can be working with legendary designer Shigeru Miyamoto.

“This is the first time I’ve ever done this kind of collaborative design. It’s not just with Mr. Miyamoto, but also with Mr. Hayashi here. I’m struck by how fast this goes. The turnaround between the exchange of the two parties is very quick. It’s a kind of development speed I haven’t really seen before.” – Hashimoto

“The three of us are always working together and it’s very fun, but obviously when Mr. Miyamoto shows you something and is like, what do you think of this, and you have to come up with a good answer, it’s very nerve-wracking.” – Hayashi

END_OF_DOCUMENT_TOKEN_TO_BE_REPLACED

In a new article coming from Polygon, Nintendo’s Yugo Hayashi and PlatinumGames’ Yusuke Hashimoto discussed Star Fox Zero in-depth. That includes talk about the project’s origins, amiibo, how it’s not a remake, the importance of the GamePad, and more.

We’ve rounded up a good amount of Hayashi and Hashimoto’s comments below. You can find some additional comments from the developers over on Polygon.