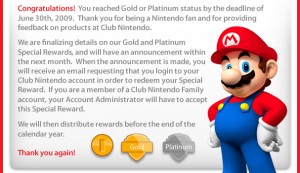 You should be receiving one of these emails shortly if you’ve reached Platinum or Gold status, if you haven’t already. Also, remember that Nintendo has reset the status of Club Nintendo members today. 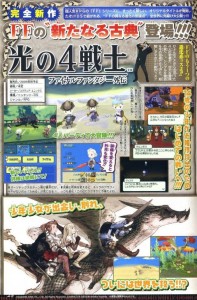 – Called Hikari no Yon Senshi: Final Fantasy Gaiden (Four Warriors of Light: Final Fantasy Gaiden)
– Menu-driven DS RPG
– Play as 14-year-old boy, needs to save a princess
– Starts with your birthday, King summons you
– King’s daughter kidnapped by a witch
– Can have parties up to four
– Battle system doesn’t have MP, has Charge command
– Some customization – type of equipment changes character appearance
– Releasing this Fall in Japan
– No relation to Game Boy’s Final Fantasy Adventure

No More Heroes probably heading to a different platform

Posted 11 years ago by Brian in News, Wii | 9 Comments

No More Heroes: Desperate Struggle may very well be the last game in the franchise to be developed for Wii. The latest edition of EDGE features an interview with Goichi Suda, who is the director of the game. In the past, Suda 51 has expressed interest in bringing the series to other platforms, going as far as to say that, “it’d be good to have a chance to release the game on other consoles.” Now Suda has gone even farther with his words and shared with the magazine that No More Heroes will most likely be making a transition to “a new platform.”

“I think this is the last No More Heroes that is going to be developed on Wii. To expand No More Heroes to new possibilities, we need a new platform. Wii is a great platform, but we’ve done everything we can with it now.”

London (1st July 2009) – Square Enix Ltd., the publisher of Square Enix® interactive entertainment products in Europe and other PAL territories, today announces that PUZZLE BOBBLE GALAXY™ a brand new release from TAITO®, based on the classic video game franchise Bubble Bobble, will be released across PAL territories on 28th of August, 2009 exclusively on the Nintendo DS™ handheld system.

PUZZLE BOBBLE GALAXY is a match-three arcade puzzle game starring the loveable Bub and Bob dinosaur brothers from the hugely popular Bubble Bobble game. Players will embark on a magnificent adventure set in space as they help battle against powerful enemies who are trying to rule the entire universe. True to the original classic, players will shoot balls from the cannon located at the bottom of the screen, matching colours with the gaggle of bubbles at the top. Patience and perseverance not included but, the rewards will be generous!

END_OF_DOCUMENT_TOKEN_TO_BE_REPLACED

The Harry Potter and the Half-Blood Prince Videogame is THE Place for Fans to Live the Thrills, Action and Excitement of Harry Potter This Summer

In the game of Harry Potter and the Half-Blood Prince, players return to Hogwarts™ – reproduced from movie blueprints in exacting detail – to help Harry survive a fraught sixth year. Players will be able to master gesture-based spell-casting as they explore the Hogwarts school grounds, from the heights of the Astronomy Tower to Professor Slughorn’s Potions classroom in the depths of the dungeons and iconic locations in between such as the Gryffindor™ common room and the Great Hall.