10 people a week hospitalized in Britain from Wii use?

“There has been a 100 per cent increase in patients complaining of Wii-itis. I’ve seen many patients aged between eight and 13 — and I’ve seen adults. It’s possible that Wii-itus may lead to rheumatism and arthritis in later life. Patients often have inflammation of the shoulder or wrist. People who are double-jointed are most likely to suffer from Wii-knee — and in extreme cases the knee cap can be dislocated or can even pop out.” – Dr Dev Mukerjee, of Broomfield Hospital, Chelmsford, Essex

Wow…I don’t know if this is really true or not, but somehow I really have a difficult time believing this! We’ve all heard of Wiiitis before, but have things really the situation really deteriorated to this extent? Or do people not know when they should stop playing Wii Sports/Wii Fit?

“One thing we’d like to do is – if this game is well received – think about releasing Klonoa 2 [on Wii] followed up by a sequel after that so that players could see the entire series. We feel very proud of Klonoa. We feel that the gameplay is both unique and solid. And we’d like as many players to experience that as possible. We think it’s got a unique story and we hope that a new generation of players will play through to the end and enjoy it just as much as the fans did 10 years ago.” – Hideo Yoshizawa, Klonoa director

I actually never played the first Klonoa game, but I’m heavily interested in playing it on Wii. I’d be especially happy to see more Klonoa games on Wii, but as Mr. Yoshizawa mentions, the first game needs to be well received. Make sure you guys buy the game when it releases!

Sonic and the Black Knight screenshots

There’s a few old shots in this batch but most of these images look new. 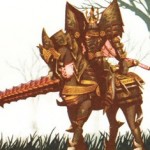 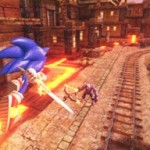 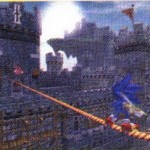 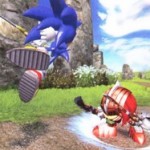 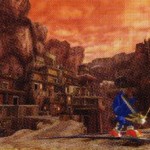 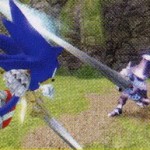 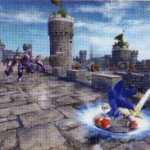 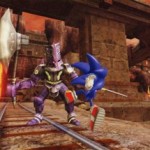 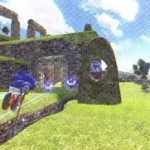 Thanks to Joclo for the news tip!

– Combat is in real time
– Move character on battle field attacking directly
– Wait gauge – wait for it to fill before attacking again
– Access magic through circles on touch screen
– Online compatible – groups of three, can send chat messages to each other while taking on quests
– Complex character customization system – Start with default male or female, then can change parts
– Eyebrows, eyes, hair styles/color, mouth shape, voice can all be changed
– Equipment has visual effects on the characters
– Single player also has parties of three
– Takes two years after events of the original
– Still on track for 2009

“At this time, we have no plans of making sequels to any of those properties. I can’t say we won’t, for certain, but it’s not very likely or appealing. If we had no other properties to depend on for making new games, we might be desperate enough to create sequels to those titles, but that’s not the case. We have a lot of titles that we want to make and other sequels that are waiting to be made. So, there’s no interest at the moment.”

On the bright side, Inafune seems more open to creating a sequel to Mega Man 9.

“This title has been revived based on our users’ feedback. They indicated that they wanted to see it again, so if we can continue to find ways to involve users and use their feedback to evolve the game, I think we can go on to continue to make MM10, MM11, and so on. The main point is how and if we can continue to incorporate user feedback into the creation of the game.”

Sparse details regarding an apparent Wii-exclusive game have been found. A “Commander Video” for the title was discovered which features a creepy set up and doesn’t seem to make much sense. Evidently, this “game” is coming out in 2009 and the video does show a frame from the game.

Basically, this whole situation is rather confusing and doesn’t explain much. IGN seems to think that this is indeed a real game, but close to nothing can be deciphered from the video above and from the small details that have been reported. We’ll have to wait and see whether this game is actually real, but if it is, is does look somewhat intriguing to say the least.

News from a month or so ago came about that Kingdom Hearts 358/2 Days would ship in February over in Japan along with a special edition DSi for the game. Sadly, this is no longer the case. It was revealed at Jump Festa today that the game has been pushed back. 358/2 Days is now on track for a “Spring 2009” release. No word yet if the special edition DSi will still launch alongside the game, but the chances are likely.

Posted 13 years ago by Brian in General Nintendo, News | 2 Comments

“The figures [NPD numbers] across the board [Wii, 360, PS3] are fantastic. There’s no question about it. The industry continues to display signs of being recession proof. As far as platform strategy, our plans of supporting all platforms with titles is completely supported by the November numbers.” – Christian Svensson, Corporate Officer/VP of Strategic Planning & Business Development

Nintendo definitely had an amazing November with about around 3.5 million units sold between the Wii and DS. In terms of the Wii, this should prove to third parties that the system still has staying power and perhaps the November numbers will convince a few companies to step up their support for the platform.