The Legend of Zelda: Breath of the Wild

Interview with voice of Princess Zelda from Breath of the Wild

Posted on 3 years ago by Zack in Switch, Videos | 13 Comments

In Game Informer’s latest episode of the GI Show, the voice actor behind Princess Zelda from Breath of the Wild, Patricia Summersett, is interviewed about her experience voicing the character.

While nothing new related to the game is revealed, it’s nonetheless worth listening to if you’re interested in hearing how the voice of the current incarnation of Princess Zelda was chosen. The segment featuring the interview starts at 1:30:45 in the video below.

More: interview, The Legend of Zelda: Breath of the Wild

Posted on 3 years ago by Andrew in News, Switch, Wii U | 11 Comments

Takfloyd, a Reddit user, posted that they found a incredible small detail put into the soundtrack for Breath of the Wild. They found out you can hear the morse code for the SOS distress signal when you land on the Divine Beasts for the first time.

“I was listening to the soundtrack and spotted this in the first phase of Vah Medoh’s theme, then went back and paid closer attention to the other three Divine Beast background themes and indeed – one of the audio channels beeps out S.O.S. in all of them, until you activate the first terminal and the music changes. In the case of the other three beasts it’s harder to spot because the opposite channel plays a different set of beeps, but it’s unmistakably there. I thought that was interesting.”

You can hear the SOS distress signal for yourself in the first video below, coming in at around 15 seconds. We’ve also included the music for the other Divine Beasts.

END_OF_DOCUMENT_TOKEN_TO_BE_REPLACED

Ditching the Master Sword isn’t normally possible in The Legend of Zelda: Breath of the Wild. But with a new glitch, players are allowing for it to happen – and in a strange way.

Having enemies shoot a certain number of arrows causes issues with the game’s memory management. When there are too many arrows, you’ll see a glitched character model of Link in the inventory menu. Weapons can also be duplicated. By doing so, you can “drop” the Master Sword, and you’ll even see a message stating: “The Master Sword has returned to the forest”.

Note that the sword is still kept in your inventory. It’s though that Nintendo may have thought about creating a possible failsafe in a previous build that was ultimately discarded. It’s pretty neat in any case. 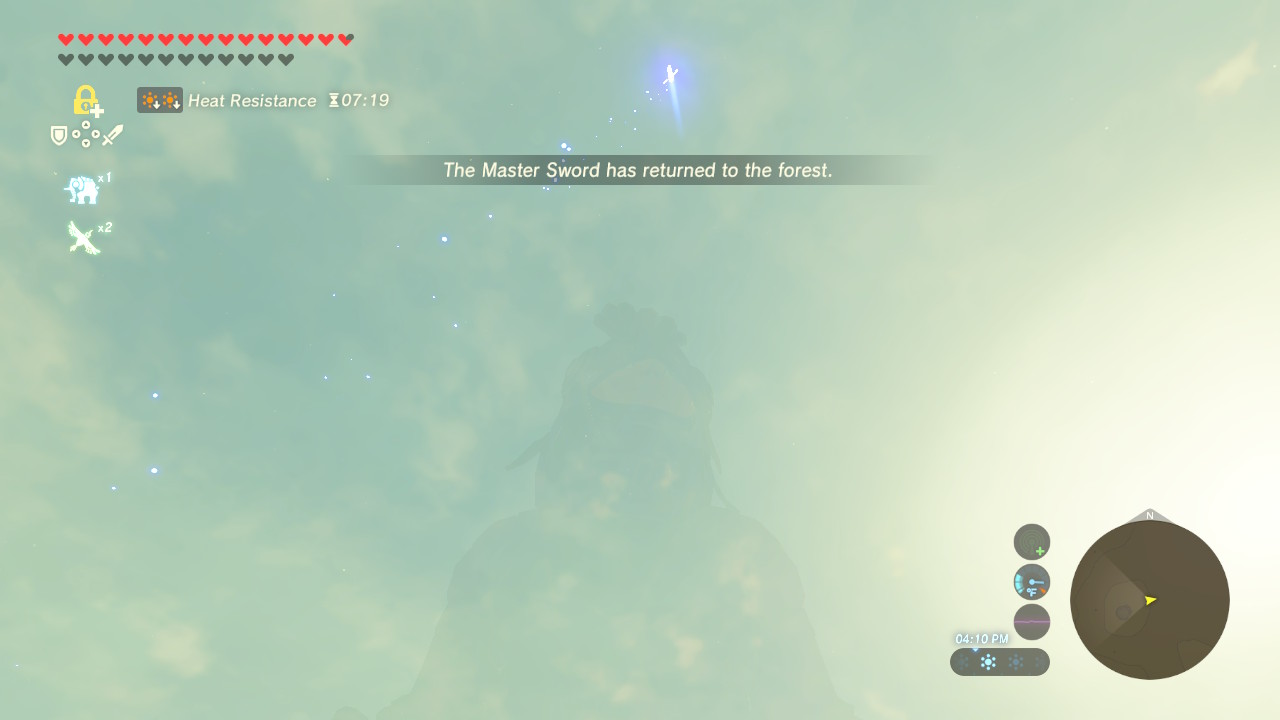 This week, Nintendo delivered substantial news about The Legend of Zelda: Breath of the Wild’s first wave of DLC. The debut pack, titled The Master Trials, is still on track for the summer.

There’s more to the DLC than originally announced. You’ll be getting a new Hard Mode, Trial of the Sword challenge, Hero’s Path Mode to track routes taken on the map, Travel Medallion for a designated warp point, and Korok Mask to more easily track Koroks. Oh, and a bunch of new equipment is being prepared based on fan-favorite games and characters including Midna, Tingle, Phantom and Majora’s Mask.

How do you feel about the DLC thus far? Is there one element of the pack in particular that interests you more than anything else? Or are you just feeling indifferent about it all? Share your thoughts with us below.

END_OF_DOCUMENT_TOKEN_TO_BE_REPLACED

Posted on 4 years ago by Brian(@NE_Brian) in News, Switch, Wii U | 3 Comments

A new entry was added to the Nintendo Treehouse Log on Tumblr today. This time around, Nintendo’s Bill Trinen talks about cooking.

Back in 2004, Eiji Aonuma gave a presentation called “The Evolution of a Franchise: The Legend of Zelda”. Today it serves as an interesting look into the series’ transition at a point in time just before the Legend of Zelda: Twilight Princess game for the Wii was first announced. I interpreted for him for both the presentation as well as a number of interviews he did afterwards, and one of the themes he mentioned in both the interviews and the presentations was cooking. He talked about making a Zelda game as being similar to cooking stew: both are long processes, both require the combination of multiple different ingredients and seasonings, and when cooked together those ingredients combine to complete the overall flavor, which is enhanced. And he noted then that he was interested in making a game about cooking.

The very first time I played through the Great Plateau, I came across apples and mushrooms fairly early on in my wanderings. Of course, I collected them (I do love mushrooms!), and to a certain degree it seemed fairly straightforward that they would serve as food. But soon I was collecting acorns, herbs, raw meat, and spicy peppers, and when I found the old man at his cabin and started combining ingredients, I remembered Aonuma-san’s presentation and realized he finally achieved his goal of making a game about cooking.

Nate had made it out to the beach, where he found some crab and a campfire with a pot at sunset. Feeling very pleased with himself, he threw some crab in the pot with some spicy peppers, only to find out crab wasn’t used for food recipes – it was for elixirs! This happened to fit perfectly with my own personal description of crustaceans as being “the insects of the sea,” but as an east coaster who grew up on crab, Nate wasn’t having it. He contacted Fujibayashi-san that night and began passionately explaining to the development team how much people like to eat crab, begging him to add crab dishes to the menu.

And some concept art:

Kimishima on Zelda’s reception, more popular in Europe and Japan than expected

“We are deeply thankful for the wonderful response to The Legend of Zelda: Breath of the Wild and the fact that we were able to ship more units than we did of the Nintendo Switch hardware. Since The Legend of Zelda series is very popular in Europe and in particular in the U.S., and the hardware launch was in March, we thought that we might end up with different results from a holiday season launch (when a wider range of consumers are likely to make purchases), and so we expected that there may be a high ratio of consumers who purchased this game along with the hardware.

The result was exactly as expected in the U.S., but the game is much larger in scale than previous games, and it reached greater popularity than we had expected in Europe and Japan as people tried it themselves or watched others play. Reviews of this game prior to release were also very helpful in communicating its appeal. Ultimately, we were able to achieve these results because of the response not only from fans of The Legend of Zelda series, but also from consumers who had played a Zelda game in the past and wanted to play one again, as well as consumers who had never played a Zelda game before but who heard the buzz and wanted to play.

We would certainly like to be able to predict the worldwide popularity of The Legend of Zelda: Breath of the Wild, as you suggest, but we are still not able to forecast to that degree of accuracy. The end result was that the number of units of this game shipped was higher than the number of units of hardware shipped.”

More: Tatsumi Kimishima, The Legend of Zelda: Breath of the Wild

Posted on 4 years ago by Brian(@NE_Brian) in Switch, Videos, Wii U | 26 Comments

One of the new elements included in Zelda: Breath of the Wild’s first DLC pack is the Hero’s Path Mode. It will monitor every step you make and mark a path on the map, allowing you to more easily keep track of progress.

Nintendo now has a video up showing the Hero’s Path Mode in action. You can view it below.

The Legend of Zelda: Breath of the Wild has received a new update. Version 1.2.0 is out now on both Switch and Wii U.

As detailed in today’s announcement covering Breath of the Wild’s first DLC pack, players can experience the game in one of nine audio languages: Japanese, English, French (France), French (Canada), German, Spanish (Spain), Spanish (Latin America), Italian, and Russian, with a different language used for on-screen text. Note that on Wii U, you’ll need to download the Voice Pack from the eShop.

Nintendo also says it implemented a number of fixes in today’s update, but didn’t elaborate on details.

Nintendo has just revealed brand new details about what’s in store for the first DLC pack in The Legend of Zelda: Breath of the Wild, titled “The Master Trials”.

The Master Trials will encompass several new features and additions. This includes the new Trial of the Sword, in which enemies appear one after another in 45 rooms. Completing it will allow the Master Sword to always be in its glowing state. Hard Mode, Hero’s Path Mode (tracked routes), Travel Medallion (create temporary new travel point), Korok Mask (find Korok locations more easily), and new equipment are also planned.

Read up on today’s full announcement for full details below. We also have several pieces of screenshots and art.

END_OF_DOCUMENT_TOKEN_TO_BE_REPLACED

The English voice actor for Sidon in The Legend of Zelda: Breath of the Wild was somewhat of a mystery. It was originally thought that the character was voiced by Bill Rogers, but it turns out it was a different person entirely.

Interestingly enough, the confirmation of Sidon’s actual voice actor comes from Sean Chiplock. Chiplock played the roles of Revali, Teba, and the Great Deku Tree in Breath of the Wild.